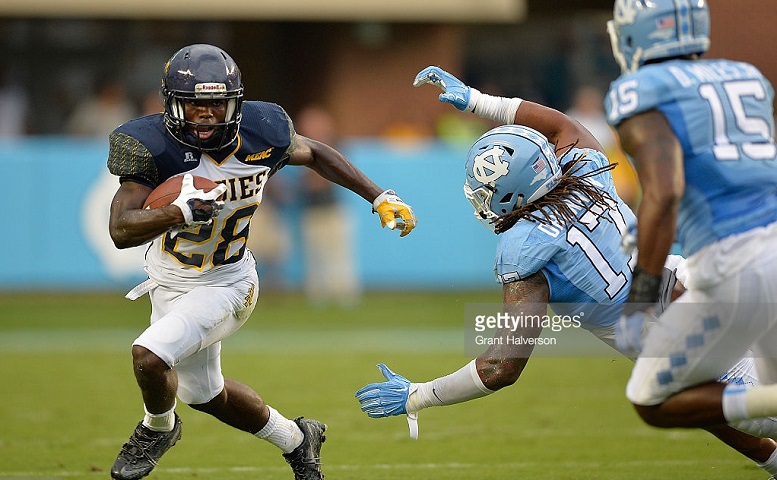 – Effortless change of direction speed
– Great hands for a running back
– Offers variety of routes when split out wide
– Elite acceleration and speed, always a threat to take a handoff to the end zone
– Unmatched speed to the sideline
– Incredible open field vision, understands blocks and body control

– Undersized, will likely need to put on a few more pounds to endure an NFL schedule
– Level of competition was incredibly low
– Presents easy target for defenders when fighting for yardage
– Ball security issues when in the defense’s grasp
– Needs to be more comfortable running inside, tends to run laterally towards sideline

If you have ever played Madden on rookie difficulty then you already have a good understanding of what it is like to be Tarik Cohen. Nicknamed “The Human Joystick” for his video game like production, Cohen evaded defenders on route to the most rushing yards in MEAC history.

When or if Cohen is included in the latest installment of the Madden series, here a few attributes that you could expect to be rated highly – elusiveness, open field vision, acceleration and speed.  The play above, which despite how unbelievable it may look, did happen and on more than one occasion. Trouble looms for defenses if Cohen is given even a yard of space to operate as it is here where Cohen can use one of his many assets to produce a big play.

While I will discuss scheme fit and competition levels in a short while, this time will be taken to explore Cohen from an individual point of view. The play above is an example of the great change of direction quickness and elusiveness that Cohen offers. Leaving defenders looking foolish in the process, Cohen is able to cut and get back to full stride at the flick of a switch.

Like other running backs his size, Cohen is also a threat as a receiving threat. The only difference being that Cohen is able to line up from a variety of positions with the backfield, slot or out wide all being areas of his expertise.

Other running backs with Cohen’s skillset are usually targeted solely on a screen or on a swing pass. Cohen can do both and more due to his reliable hands. This gifts Cohen not only the opportunity to be a mismatch option as a receiver but also the tools to execute.

Though Cohen’s game tapes make him look Hall of Fame bound, it would be a complete misjudgment to project his production to carry over to the NFL. While Cohen enjoyed record breaking success while playing on rookie difficulty in the MEAC, he will soon learn that the playing difficulty rises more than just few notches higher in the NFL.

Defenses in the NFL are awfully fast, an ideology that Cohen is not accustomed to. While at North Carolina A&T, the running back had a habit of attempting to outrun defenders laterally before turning upfield – a running strategy that enjoys little to no success against the athletic warriors of the NFL. Unless Cohen becomes more comfortable running in tight space, he may be at risk of replicating plays like the one below at the next level.

Cohen has an early running lane appear to his right but seems hesitant to pursue, instead falling back to old habits and attempting to investigate the perimeter. I really cannot put too much blame on Cohen as it is a strategy that worked throughout his college career but it is a habit that will need correcting should Cohen hope to last in the NFL.

Seeing as Cohen took most of his handoffs in the gun, his ability to transition into a pro-style offense is also at question. Here is a glimpse of what Cohen can offer as a running back in a traditional I formation.

Ultimately, Cohen needs the right scheme and fit for him to be successful. It is why I cannot see the Steelers having much interest in the North Carolina A&T running back as the team has already been down this road before with Dri Archer. To Cohen’s credit, he appears tougher on tape than Archer ever did but he still echoes many of the same scheme issues Archer had during his stint in Pittsburgh.

While I do believe the North Carolina phenom known as The Human Joystick could handle a complementary role in certain offenses, I do not believe the Steelers will be playing this game again anytime soon.

Games Watched: vs Kent State, vs Alcorn State, vs Richmond