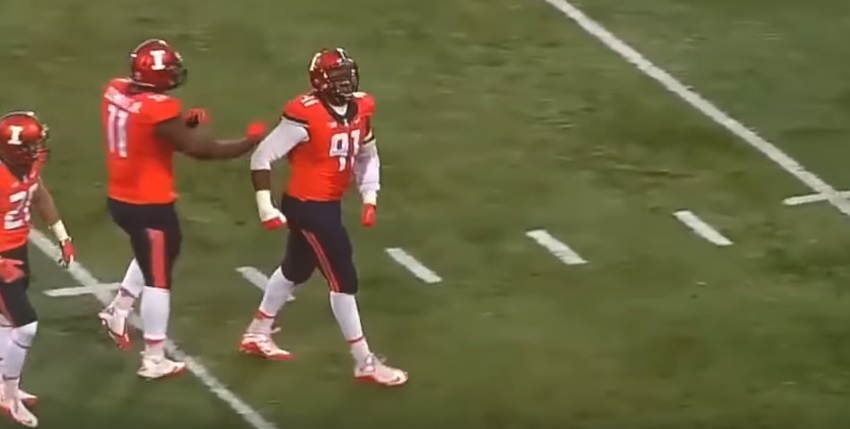 – Looks the part, fills out frame and has excellent length (33 1/4 inch arms)
– Uses hands really well, advanced in that area compared to most others, and does well to stay clean
– Not a great athlete but bends the edge well and shows ability to dip/rip and flatten the edge
– Strong at the POA against the run on the edge and does well to keep vision on the football, shows the ability to work off blocks
– Overall, gap sound and experience one and two-gapping
– Smart pass rusher, good IQ, and ability to counter the tackle’s set
– Has experience on both end spots and kicked inside on 3rd downs
– High effort player
– Statistically productive though not overwhelming career

– Average athlete and get off as a pass rusher
– Tested average to below average (4.77 40, 1.68 ten split, 29.5 vert and 9’9” broad)
– Lacks functional strength as an interior rusher, initial punch is only average
– Inconsistent pass rusher who loses too many battles to tight ends and running backs when he should be more dominant
– Was not asked to drop into coverage often and looked stiff when he did so
– Wasn’t as productive as a senior as he was a junior

Smoot is one of the final outside linebackers we’re circling to. Someone I’ve been meaning to write about, especially after a solid Senior Bowl week that I think helped open eyes. And at the time, reported the team had interest in Smoot.

His best quality is the ability to get skinny and bend the edge. He really convinced me of that each practice at the Senior Bowl. By the end of his day, his shoulder pads would be ripped to shreds from tackles clawing at him all day long. But he showed it in-game too.

Similar to Derek Rivers, he has an advanced knowledge and use of his hands, working hard to stay clean. They need to be more active and consistent but when he has a plan, he’s effective. Smart pass rusher who overcomes his physical limitations as an average athlete. LDE here.

But he did disappear in moments he should’ve dominated. His game against Michigan was particularly disappointing, getting stonewalled by running backs and tight ends far too often. I know it’s third and short but watch Jake Butt drive Smoot into the ground.

Smoot isn’t a flashy pass rusher and I don’t think he’ll ever be a dominant guy. Just not a good enough athlete to make those odds look good. But he’s certainly solid and a pick that’s as hard to hate as it is to love.

Games Watched: at Nebraska, at Michigan, at Northwestern, Senior Bowl