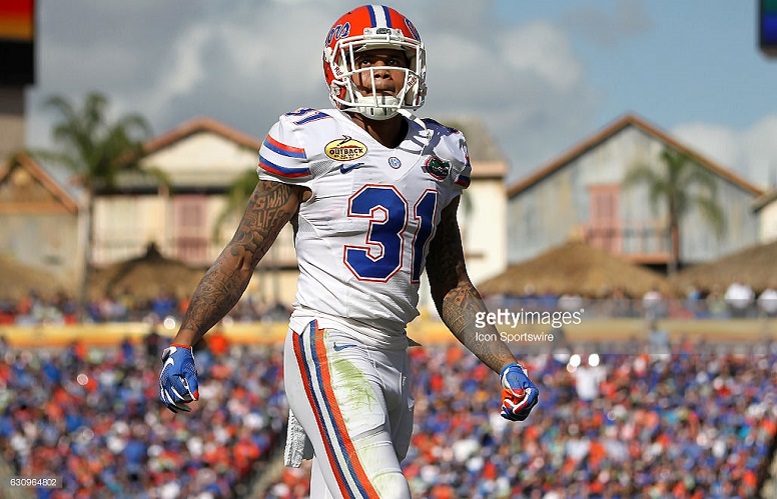 – NFL frame with good bulk and decent length (32 inch arms)
– Aggressive mentality with good football IQ who succeeds in zone coverage, shows burst out of flat foot read and able to step in front of underneath routes
– Uses length well and does great job to compete at catch points, strong hands to finish the play
– Takes good angles to the football and shows ability to play the ball and secure the tackler
– Shows more fluidity in his turn than expected and isn’t particularly stiff
– Overall, solid tackler who will come up to support the run and finishes plays with physicality
– Did well in press, strong punch and patient feet, stays square and doesn’t open hips on his jam
– Young guy still growing and hasn’t played a lot of football

– Tested poorly and 40 time at Pro Day was worse than Combine, creating questions over work ethic
– Lacks long speed and will be challenged downfield, sometimes struggles to reach runner even with correct angle
– Probably not an ideal fit for man-heavy team
– Gets too grabby downfield when he doesn’t have vision on the ball and penalties are a concern
– Does fight his height in his pedal and has to work not to get too tall

Tabor is one of the few corners whose stock has taken a tangible tumble throughout the draft process. Bigger, longer corners don’t always have to blaze a 4.4 flat but there is a threshold they gotta run. Had he run a 4.55, he’d still squarely be in the first round conversation. But at the Combine, he turned in a 4.62. Worse yet, at his Pro Day, where you’d expect guys to run better, he ran in the 4.7’s. Tumble he did.

On the plus side, which is where we start with all these guys, is his hands and football IQ. He played a lot of press with the Gators but I liked him in off man/zone work too. Reads routes and the QB well with the ability to finish. Watch him read, break, and intercept this pass. Top of the screen.

And he uses his length well to play the pocket, showing strong hands and taking good angles to the football.

He’s a good tackler with an aggressive nature. Definitely willing to support the run and does so competently, something I can’t say about a lot of these 6’0+ corners, including teammate Quincy Wilson.

But speed is the name of the game for a corner and Tabor doesn’t show much of it. That shows up if he’s moving across or down the field. He reads this end around well enough and takes a good angle but simply doesn’t have the jets to get to the receiver in time.

His lack of speed and ability to find the ball in man coverage is another problem and dubious combination. Even against lowly North Texas, a team the Gators beat 32-zip, Tabor was flagged for pass interference twice in two drives during the third quarter. In total, I saw three penalties against him in all the tape I watched.

I don’t want to keep making comparisons to Brandon Browner, there’s a point where that gets lazy, and I burned that one already on Marquez White. So I’ll comp Tabor to Ladarius Gunter, a UDFA of the Green Bay Packers in 2015. Tabor will get drafted, of course, but I’d honestly rather have a guy like White, who has a similar skillset and will likely be drafted two rounds later.

Games Watched: vs North Texas, at Vanderbilt, vs Missouri, at LSU, at Florida State, at Alabama