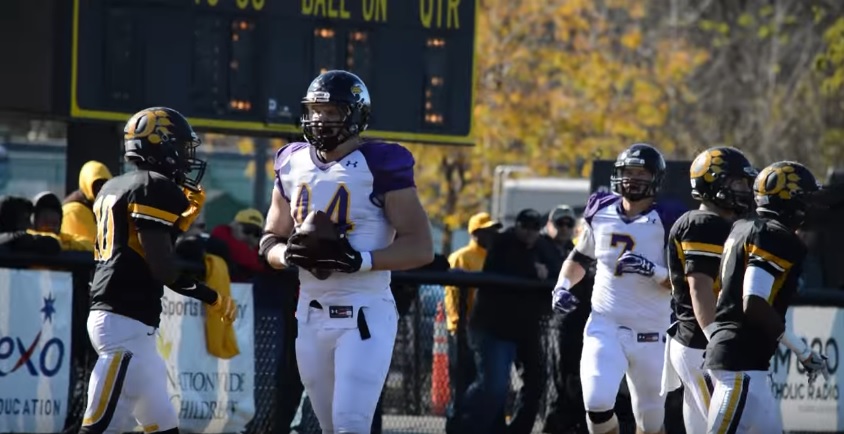 – Unusual size for the college game, looks like a small OT. Good length and big hands (33 1/3, 9 5/8 respectively)
– Strong combination of blocking and receiving ability
– Uses length well to create space and shows upper body strength as a run blocker, desire to finish and has some nasty to his game, tough dude
– Good hands, capable of catching in traffic and high pointing the football downfield
– Experience as an in-line blocker and out of a three point stance, what he did the majority of the time
– Nuanced route runner who sells routes well and his best means of separation
– Not quick or agile but build-up speed runner who is better in a straight line than you’d expect
– Ran variety of routes in pro-style offense
– Crazy amount of production his senior year, one of the most dominant tight ends in all of football and showed ability to take over games

– Probably too heavy and should shed some weight to gain speed/agility
– Not an explosive route runner who is only average out of his breaks, could have trouble with separation at the next level
– Can get overextended in the run game and fall off blocks though shows determination to finish
– Obvious small school concerns

I was hoping for more tape on Shaheen but ultimately, the two games on Draft Breakdown were the two I could come up with. Not even full games I saw around. It’s a more limited look than what I’m typically comfortable with but knowing the buzz that surrounded him on the forums so it was important we profile him.

Obviously, you don’t see a lot of 278 pound tight ends at this level. At least, unless they’re just glorified blockers.  But Shaheen is a weapon, as his stats indicate. And a 4.78 40 time at 278 pounds is respectable.

He’s a vertical threat because of his size/speed combination but he was able to win with nuance too. Runs a really strong sick-nod, a double-move Ashland ran in the red zone. Fake the out and burst up the seam.

Also a tough dude who can, and this is critical for any tight end, catch in traffic. Playing tight end means you’re going to spend most of your time in the middle of the field, surrounded by linebackers and safeties trying to take your head off. Gotta be able to sacrifice your body, go over the middle, gotta be tough. Shaheen does so here in the end zone, making this catch between a couple defenders for the score.

His size translates into a competent blocker but his strength and desire can make him a really good one. Shows leg drive and a willingness to block and spent most of his snaps out of a three point stance, something a lot of college tight ends aren’t doing anymore. Should be really comfortable there and cleaning up his technique will be less of a challenge, even if he’s coming from the D-II level.

It was only two games but against Northwood, Shaheen absolutely took over. Seven catches, four touchdowns. He caught a touchdown in all but two games – one was a blowout where Ashland only threw the ball 19 times – and went over the century mark three different times. Combined, OJ Howard and David Njoku only did it twice.

Not a lot visible on the negative side because he’s a big, relatively athletic dude playing against a low level of competition. I think him dropping weight would be important. He’ll still be a good blocker at 260-265 but be more agile and explosive out of his break, similar to what the team asked Jesse James (he was 6’7, 261 at the Combine).

He’s a fun prospect because he breaks the mold of the big wide receiver called a tight end. But he’s an athlete too and weapon in the pass game. That doesn’t automatically translate to success, and I don’t know if he’ll ever quite be a #1 tight end, but could turn out to have a slightly more successful career than Scott Chandler.