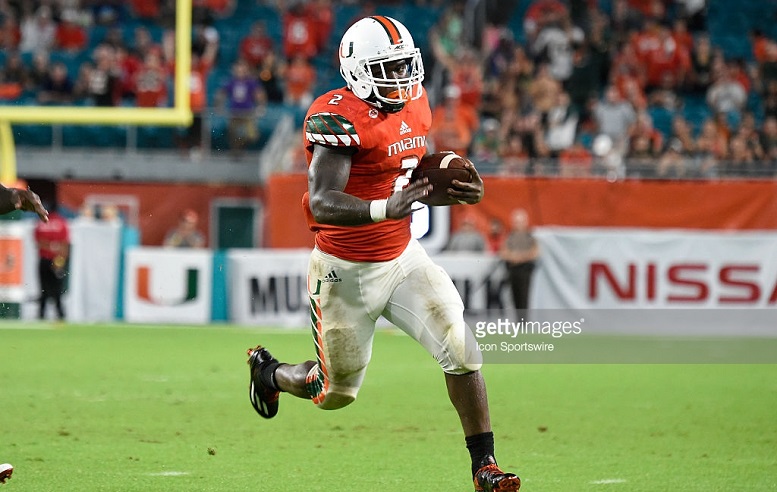 – Quick, light feet that allow him to change directions quickly
– Makes defenders miss with balance, juke and spin moves
– Has good burst to get away from defenders
– Reads blocks and rushing lanes well
– Catches the ball cleanly in stride
– One career fumble on 393 carries
– Mean stiff-arm

– Only started one season in college (2015), left junior year as third stringer with coaching change
– Takes too many steps when fewer would work just as well or better
– Doesn’t break many tackles especially in short yardage/goal line situations
– Is as big as he is going to get, no more room on his frame
– More quick than fast
– Not a refined pass blocker

The halfback reads the line on his delayed handoff. He sees a hole developing off tackle, bursts through the opening while avoiding arm tackles, puts his foot in the dirt and runs to daylight down the sidelines for a touchdown!

In a single back formation, Yearby cuts back against the field almost scraping his backside guard and tackle, then uses a stiff-arm to knock down the defensive back stepping up to try to make the play. The back turns the corner, using the first defender to block the second defender while tip-toeing down the sideline, showing off good balance running for a 14 yard gain on first down.

Lined up beside Kaaya in the shotgun formation, Yearby takes the delayed handoff, originally starts bouncing outside. This forces the safety to commit outside, so the runner jukes/bounces back inside and gets wrapped up, but continues to drive his legs forward for a 7-yard gain.

Once again, in the shotgun to Kaaya’s right, the back attacks the line of scrimmage at the snap of the ball. Yearby flattens out around three yards and cuts his route back allowing the QB to hit the runner in stride while shielding the pigskin from his coverage for a 9-yard gain on a 1st down play.

This runner has good agility and burst, who looks good in space. His body is maxed out and is more quick than fast. The former Hurricane can catch passes out of the backfield, but do not offer much as a pass blocker. I see him as more of a change of pace runner than an eventual starter. Yearby has some of the same smoothness that Bell possesses, but to a smaller degree. If the Steelers could acquire him near or at the end of the draft, I think he could be groomed into a special teams player and change of pace back.