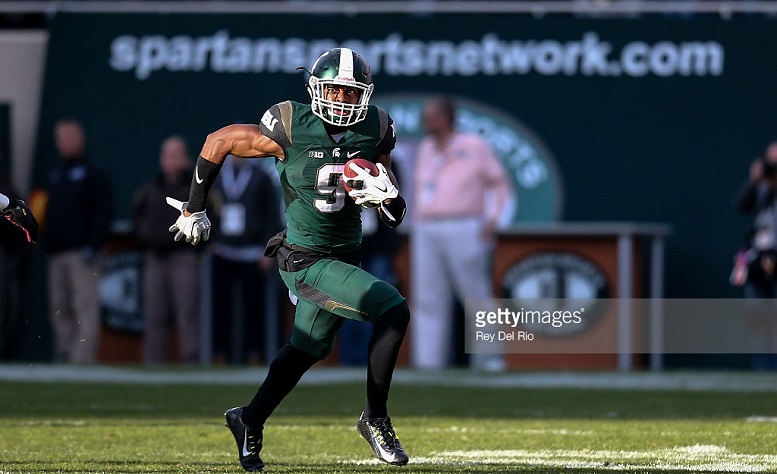 – Not very calculating, hits before thinking, but can also be very indecisive in coverage
– Looks like Tarzan, plays like Jane (big imposing size and athleticism, doesn’t always use his gifts)
– Takes bad angles while leaving his feet hitting the ball carrier too high and off-balance
– Dealt with several nagging injuries in college, always seemed to be banged up
– Had surgery to repair a torn labrum in March 2017

Nicholson lines up as free safety, sprinting to the high middle at the snap of the ball. He sees the run developing, then he launches himself shoulder first at the ball carrier sending them both head over tea kettle. It’s alarming he did not attempt to wrap the back up, instead he just threw a shoulder at him.

Setting up 10 yards off the line of scrimmage, the safety reads inside run and steps up to meet the back, but gets tunnel vision by not seeing the tight end. #85 squares up and engages Nicholson; but the defender stands his ground which helps clog the middle of the field. However, the Spartan free safety was fortunate as he did not see the TE coming to block him and only focused on the back. Had #85 sealed Nicholson, the running play could have been even more successful.

Playing in a double high safety look 10 yards off the line of scrimmage, Nicholson sees the QB drop back and reads pass. He notices the WR coming out to the flats in front of him. The safety clicks and closes, hitting the receiver low as the left side backer cleans up high.

The free safety is lined up in the deep middle at the snap. He notices the wide out crossing his face near the sticks. Nicholson uses good tackling technique getting his hips underneath himself to engulf the receiver and drive #15 back preventing the first down.

The former Spartan looks the part off the hoof, but doesn’t play as well with pads on. He gets tunnel vision and doesn’t understand everything that is going on around him. Nicholson loves to hit people and has a good understanding of special teams, but is lacking in the tackling department without leaving his feet. I would draft him as a core special teams who loves sacrificing his body and not as a possible starting safety. The Steelers should do the same.

Games Watched: vs. Furman, vs. Wisconsin, vs. BYU, vs. Michigan