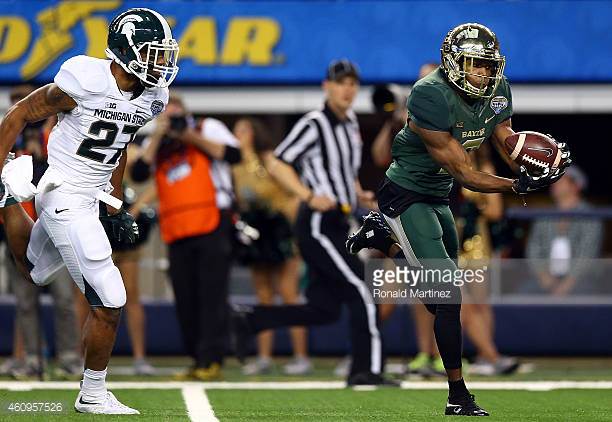 -Explosive, quick-twitch athlete for a receiver
-Eats up a ton of ground at the snap
-Gets vertical in a hurry, forcing defenders to flip hips early to try and keep pace
-Good, crisp footwork and route discipline
-Tracks the football well in the air
-Knack for winning contested balls in the air despite small frame

-Limited route tree, which has much to do with playing at Baylor
-Minimal effort as a blocker; seems to take those plays off to save energy
-Relies heavily on body catches
-Not much of a run-after-catch threat
-Can be pushed around by bigger, more physical corners

Any time you pop on tape of a Baylor receiver, you’re expecting to be amazed with highlight-reel catches and tons of numbers thrown at you due to the Baylor Air Raid system.

Last year the darling of the system was current Cleveland Browns receiver Corey Coleman. This year, there’s another speedy, big-play receiver making the rounds in this year’s draft class, and that’s K.D. Cannon, who has some serious fire about him and passion for the game of football.

While at Baylor, Cannon put up eye-popping numbers for the Bears, including a career year in 2016 in the wake of Art Briles being fired.

Granted, a large majority of Cannon’s production came on quick screen, stop routes, go routes and bubble screens, so there’s not much you can take away from that heading into the next level, but what you can take away from it is the tremendous footwork, explosiveness and downright want-to that Cannon displays routinely.

Early on against Oklahoma State during the 2015 season, Cannon pulled off a perfect stop-and-go route.

Against the Cowboys, Cannon is able to shift his weight back towards the quarterback like he’s coming to a complete stop before exploding up the field for the easy throw, resulting in a quick touchdown for the Bears.

He’s such a twitched-up player that any movement he makes causes defenders to bite, which should play right into his hands at the next level.

While not being one of the biggest receivers, Cannon is surprisingly able to win contested balls routinely.

Here against the Cowboys, he’s able to show off his balance along the sidelines to get a foot in, while also showing his ability to go up and high-point the football over a defender. It might not stand out to others, but coming from a 5’11” receiver like Cannon is pretty impressive, especially along the boundary.

As I mentioned earlier, Cannon isn’t a big run-after-catch threat with the ball in his hands like you’d expect him to be with that speed, but that’s largely due to a lack of strength.

Should he be able to add weight/strength in the right areas at the next level, he’ll become a serious problem for teams, and not one that can just take the top off of defenses.

Here against the Oklahoma Sooners in 2016 as the clear No. 1 receiver in the Baylor offense, Cannon shows some wiggle in the open field with the ball in his hands, leading to a touchdown.

In 2015, the initial tackle would be on that Cannon would go down on, but not here. It’s not a show of major strength, but I like that he’s able to power through it and then beat three defenders to the pylon for the score.

Later on in the game at Oklahoma, Cannon solidified himself for me.

Not one to really go across the middle a lot, Cannon stepped up here on this play to take a big shot while hauling in the pass, eventually running in for the score.

More often than not you see smaller receivers like Cannon shy away from contact in the middle of the field, but this seemed to fuel him as the game went on.

He’s not going to be a guy that runs through hits like this on a consistent basis, but I love his willingness to hang in there to make a play on the ball for the score.

When watching tape of Cannon, I see a guy who is absolutely in love with the game of football and has a passion for making plays as a receiver. That alone leads me to believe he’s willing to put in the work at the next level to work on his craft and become a solid option.

To me, he’s going to be that receiver that sneaks under the radar on draft day and turns into a massive bargain for whichever team is lucky enough to call his name at the end of the month.