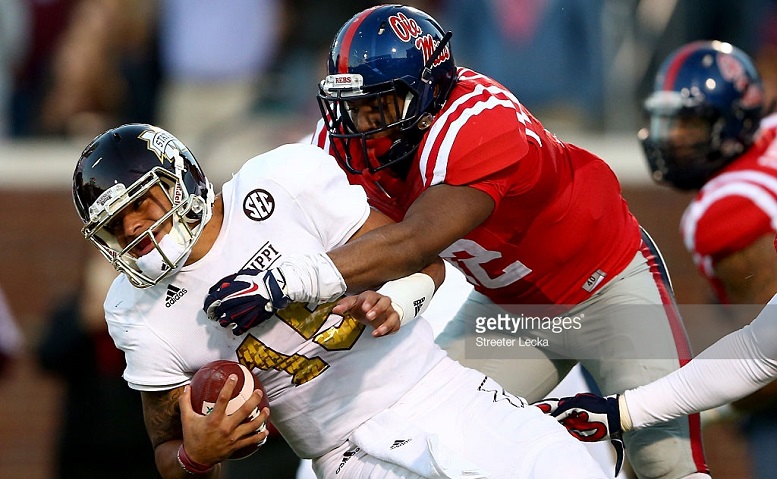 – Major injury concerns, seemed a step slower after 2015 meniscus injury
– Slower off his feet in senior season
– Needs to sharpen play action recognition
– Not overly instinctive
– Misses too many tackles for an in the box safety

One player who continuously finds himself attached to the Pittsburgh Steelers in recent weeks is Michigan’s Jabrill Peppers.  And while you may love or hate the potential for Peppers to become a member of the Steelers, you cannot downplay the interest the team seems to have for a hybrid S/LB type player. Therefore, for those of you who cannot fathom the thought of the Steelers using an early round pick on Peppers, I offer a compromise in the form of Ole Miss S/LB hybrid Tony Conner.

Playing the “Husky” position, Conner lined up in numerous positions for the Ole Miss defense. On any given play, Conner could be tasked with playing as an additional linebacker, slot corner or even as an outside linebacker. Watch below as Conner playing inside, (on the left) reads the handoff like an inside linebacker and quickly closes on the ball carrier.

Though Conner spends majority of his time around the line of scrimmage, the Ole Miss athlete is also capable of dropping into coverage. When dropping into a zone coverage, Conner shows a good understand of protecting his area of assignment. In the play below, Conner (in the slot) drops back to the left sideline and is in perfect position to nab his second and final interception of his collegiate career.

With the Steelers looking towards being more comfortable with man coverage next season, you can bet the ability to play man-to-man will be a highly sought after trait. When healthy, Conner showed promise in being able to match up one on one with the opposing team’s slot receiver. The play below is from a 2015 matchup against Alabama and shows Conner playing hip to hip with his designated receiver.

I mentioned “when healthy” above because Conner’s health has played a huge factor in his current standings. Since tearing his meniscus in 2015, Conner has been unable to replicate his 2015/2014 form. When he returned to the field last season, the Ole Miss player was notably a step slower.

Conner is a physical and mental step slower than he needs to be on the play above, allowing Auburn running back Kamryn Pettway to run right by him. Conner’s seemingly slower play speed issue snowballs into something much worse when combined with the fact that the Ole Miss player already struggled with instinctiveness.

The play above is not from Conner’s final season but from his 2015 season. The Conner above is at full health and full speed but still you can see how he struggles with recognizing the play action. Conner’s bite results in the Arkansas tight to run free underneath and score a relatively easy touchdown.

For a prospect whose arrow seemed to be pointing upwards, Conner has seen his draft stock free fall as of late.  The question facing Conner may not be about the height of his ceiling but if he can return to his pre-injury form. Until then, the Ole Miss safety may not have much of a ceiling at all, leaving him a late round pick at best. But for the Steelers and other teams currently seeking a hybrid S/LB player, little harm can be done with adding Conner’s services in hopes that he can reclaim his past play.

Games Watched: vs Alabama, vs Arkansas, vs Boise State, vs Auburn, vs LSU