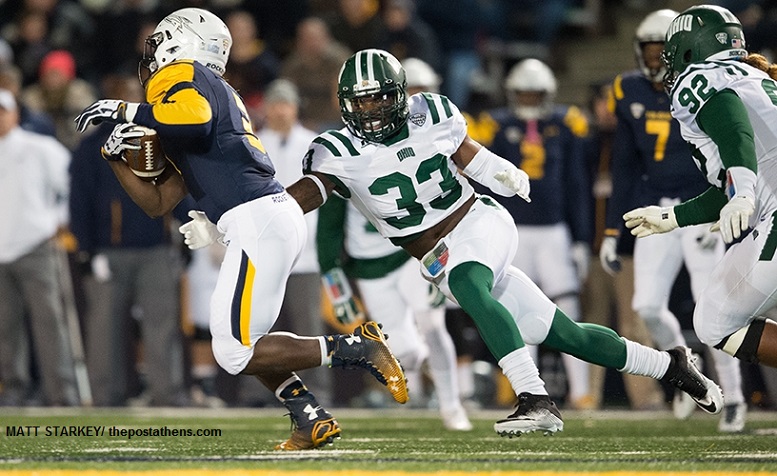 – Short height, short arms
– Has some issues disengaging from taller, longer blockers
– Makes a lot of contact with his shoulders
– Not a natural dropping back into pass coverage or keeping up with quick twitch backs running routes
– Can get fooled by play fakes because of his aggressiveness

The right inside backer, Brown, reads the offensive tackle off the snap of the ball coming to his right. He quickly steps up to fill the hole, and dips underneath the blocker. Brown engulfs the quick twitched Alvin Kamara for a short gain.

Playing inside backer, Brown senses a screen developing when the two offensive linemen on his side start pulling. He closes quickly and avoids the linemen while wrapping up Kamara for a nice open field tackle.

Brown playing a little wider than usually, stacked behind the right defensive end reads sweep immediately off the snap of the ball. He quickly flows more outside which allows the center to chip block him out of the way. The runner dips back inside for a nice gain.

The middle backer is playing two yards of the line of scrimmage. He walks up to the A-Gap to attack, but is knocked back. Brown reads the QB rolling out of the pocket and steps up, only to see the pigskin launched. The Bobcat defender flows to the receiver and watches them get stripped by a teammate who scoops up the ball for a fumble recovery.

After watching Brown, he reminded me a bit of a more physical Vince Williams. He is very instinctive, loves to hit, rarely misses a tackle, and plays the run extremely well. The backer needs to improve his coverage skills and/or become more of an inside rusher to make an impact on 3rd downs and passing situations. Brown is almost a throwback player who would have dominated in the 70’s. He could provide good depth to the Steelers linebacker corps and be a strong special teams contributor.