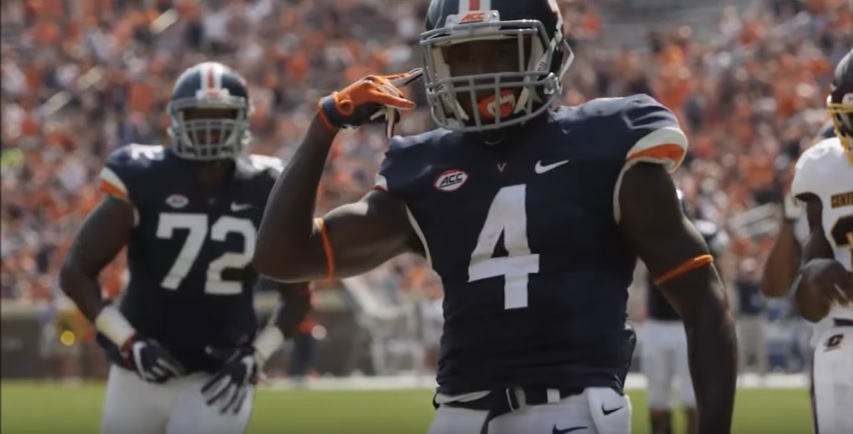 – Natural as a receiver out of the backfield and split out wide
– Good hands, quick to the tuck, and impressive route runner out of the backfield, good feet and able to separate at top of route vs linebackers in man coverage
– Good IQ as a route runner, follows scramble drill rules and shows ability to find grass and show QB his numbers
– Shows short area quickness and ability to make linebackers coming downhill on an angle miss, good vision and able to influence defenders with his eyes
– Decisive runner who gets downhill
– Minor ability to create beyond the structure of the play
– Versatile player, used in the backfield, as a receiver, and kick returner
– Contact balance through arm tackles
– Played behind bad OL that didn’t do him any favors
– Elite receiver production

– Average frame
– Not a dynamic player and lacks top end speed
– Doesn’t have much power to his game, generally goes down on first contact
– Fumbling/ball security concerns
– Gives effort in pass pro but issues staying square and can be overpowered and may also be late to recognize exotic blitzes
– Rushing production was average, kick return experience but minimal threat

Mizzell is certainly a guy most of you aren’t familiar with unless you happen to live in Virginia or, and I’m so sorry if you are, an actual Cavaliers fan. He came in to UVA as a top recruit and now leaving as an NFL Draft afterthought.

But there’s intrigue here because Mizzell does something a lot of running backs don’t – catch the ball. 195 receptions is nothing to sneeze out and I’m not sure if a single running back in this class has caught the ball more than him. As I noted above, he led the NCAA in receptions by a back in 2015 with 75 grabs, which ranked tied for 33rd overall, a great number considering he’s competing with 125 other schools.

It’s no surprise to know he’s a natural out of the backfield and he spent plenty of time as a receiver, split out wide. His route tree wasn’t very varied, mostly smoke and bubble screens but he’s comfortable, and frankly, at his best when playing in space.

Watch this Texas (angle) route out of the backfield and then the spin to get the extra couple yards and the first down.

As a runner, you see some of that lateral agility translate and I like his vision but he lacks really any standout quality. Long speed average, power is pretty poor. Goes down on first contact easily and he’ll rarely break a tackle, unless it’s a diving arm tackle. Not a super high bar.

To be fair, their offensive line was pretty bad and didn’t do him any favors. Not much running room.

Fun fact reading up on Mizzlle. Virginia has had a player drafted for the past 33 years and that streak is in serious jeopardy this season. Mizzell is their best hope to do so but he’s going to be considered a fringe draftable prospect. I have a soft spot for a guy who can bring something pretty unique to the table, and his receiving ability does just that, but with a limited skillset to be a major threat with the ball in his hands, it’s hard to think his upside is super strong.

But he’ll be a priority free agent at worse and be a competitive player in camp. Someone I’ll keep an eye on, even if his landing spot isn’t in Pittsburgh.