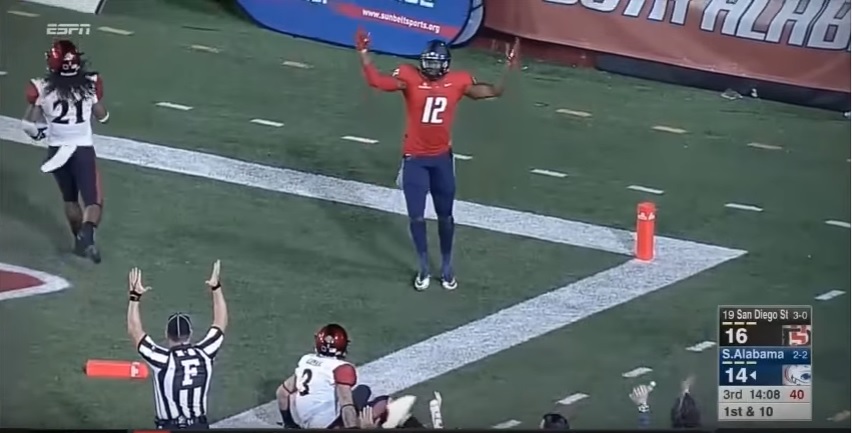 – Good length for frame (33 inch arms)
– Quality athlete, fluid player who is a threat down the seam (4.62 40)
– Size makes it tough for him to be brought down, YAC ability, and first defender on tackler rarely makes a clean, quick tackle
– Flashes ability to make difficult catches, show hand/eye coordination
– Shows explosion out of his route and doesn’t drift, especially on short-breaking ones (quick outs)

– Tweener-build who doesn’t fit mold of a traditional tight end
– Very small hands (8 1/2 inches)
– Hands are inconsistent and can’t always finish on higher difficulty throws outside of his frame
– Lacks physicality as a blocker in run and pass game, struggles at the POA to stay square and doesn’t use leverage the way he should
– Needs to show more nuance as a route runner and set up his routes better to separate consistently at the next level
– Lacks experience in a three point stance, in-line work usually came off ball in a two-point

– Career: 107 receptions, 1584 yards 13 TDs
– 2016: 49 receptions, 717 yards, 4 TDs
– Had originally committed to Bethune-Cookman, wound up going to a JUCO for a year out of high school
– Committed to UAB for 2014 season, transferred to South Alabama when program folded
– Didn’t play football until senior year of high school, was on basketball and track team prior

Everett is a guy we definitely wanted to profile and are making sure we grab here right before the draft begins. He’s part of the new wave of tight ends, tweener-ish and not really the in-line type. Everett is an impressive athlete who can win in space and is a threat after the catch.

The common knock on him are small hands which will lead to question about his ability to catch the football cleanly. There is some truth to that, especially the more I watched, but he can make tough catches outside his frame. Here’s my favorite play of his, against a well-known opponent too, NC State. Skinny post, immediate reaction, and hauls in the touchdown.

But Everett needs to get stronger, both as a blocker and receiver. Has to show my physicality to win jump balls downfield and lacks strength as a blocker at the point of attack. I’m guessing the latter is fairly obvious looking at his build. And he has very little experience out of a three point stance and even less success.

Gets turned here and falls off his block when all he had to do was hold his inside leverage on this inside zone run. Still can’t do it.

I like Everett but you gotta know how to use him, know how he wins. He’s not going to be an in-line blocker. He’s going to win on the perimeter, as a receiver, and again, I think all that is obvious. Also going to be good for him to settle down with one team after being a football nomad in his career (4 schools since high school).

In today’s NFL, there’s a growing role for that type of guy and the Steelers have seemed to embrace it with Ladarius Green. It doesn’t seem like they’re keen on taking a tight end high – or, with just eight picks, at all – but if they surprise, I certainly wouldn’t mind the pick.