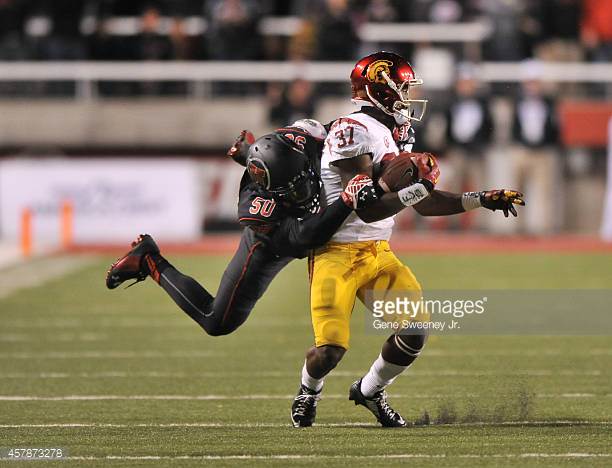 – Excellent first step, great burst off the ball that really stresses a tackle’s kickslide, often forcing them to abandon it or get deeper in their set
– Knows how he wins as a pass rusher, two strong moves – speed and inside spin
– Great flexibility and able to corner the edge and get upfield
– Excellent athlete and closing speed
– Good effort player who chases sideline to sideline
– Slight frame but decent length (32 3/8 inch arms) and big hands (9 7/8)
– Uses length well to create space in the run game and overcome strength/size issues
– Shows traits to be fluid and comfortable in coverage
– Tested well at Combine
– Productive senior season

– Lacks size, muscle, slight frame overall
– Doesn’t have strength power as a pass rusher, shows a little bit with proper hand placement on speed bull but generally rebuffed by tackles and one-arm stab does nothing for him
– Prone to getting washed inside on counters
– Was not asked to drop into coverage very often and will have to learn how to play moving backwards
– Can fire off the ball so hard that he has trouble steering himself upfield and due to lack of strength, can get run up the arc and out of the play
– Will have to use his hands better and do more than get by just on his athleticism
– Lacks starting experience and spent time as situational pass rusher

Pita Taumoepenu is a pretty easy guy to figure out. And an easy guy to root for. He’s a great athlete but raw and still playing catch up from his delayed high school days. Athletically, he’s excellent and tested well at the Combine: 4.67 40, 1.65 ten split, and a really impressive 6.91 three cone.

And that’s how he wins. A Dwight Freeney type pass rush approach – speed to the outside, spin inside to his counter. Example of both. RDE in all these clips.

But his power is weak and the poor vertical/broad jump sorta tell that story, a weaksauce 28.5 vert and 9’4” broad. His bull rush is poor and if he can’t win with speed, the battle is almost always won by the tackle. I didn’t get a great feel for his run defense, and the clips I saw weren’t awful, but there’s going to be an obvious concern for him at the next level.

He’s still raw, playing just that one year of high school football, though he positively dominated, and not getting to play a ton in college, often used as a rotational piece before seeing more consistent snaps as a senior. He admitted the learning curve of coming to a Division One college was tough, in this cool feature piece by the Deseret News, which I encourage you to check out.

“College was super hard,” he said. “The plays were hard to learn; they have a lot of plays. It’s a different level, and it was hard for me to catch up.”

He had good coaching, learning from former New York Jet nose tackle Sione Po’uha. But there’s still development in his game and he won’t be Day One ready. I don’t think he’ll ever be a full-time starter but there is a role as a situational, third down pass rusher.

Games Watched: vs California (2015), vs BYU, at California