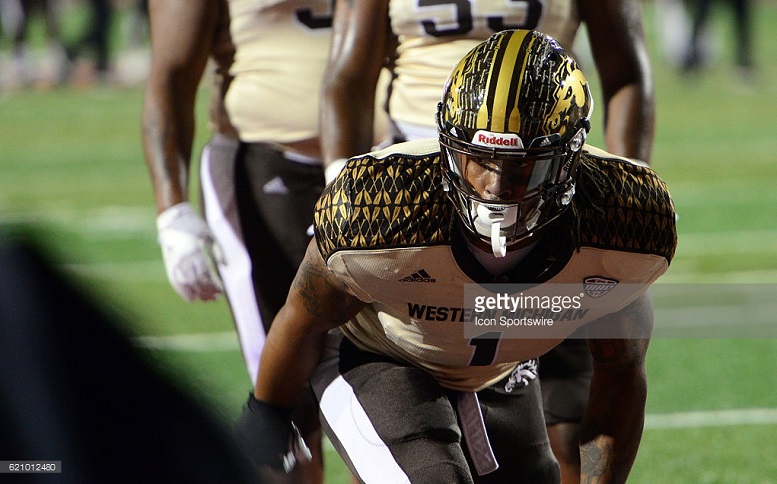 – Shows good upper body strength (27 reps on bench at pro day)
– Great speed off the edge
– Athletic and flexible, dips inside shoulder to bend around tackles
– Quick footwork makes Adams a difficult target for lineman to get their hands on
– Possesses a nifty spin move
– Times jump with rip/punch very effectively

– Average length (78.25” wingspan)
– Lacks bulk, will need to add size to withstand NFL play
– Missing a bull rush move in his pass rush arsenal
– Will easily get run up the arch unless he can develop a counter move
– Struggles to anchor the edge in run defense

An edge rusher on one of college football’s most opportunistic defenses last season, Keion Adams played a huge role in Western Michigan’s first MAC Championship in almost 30-years. Adams’ efforts did not go unnoticed as the edge rusher has earned visits from numerous teams around the league, one of those teams being the Pittsburgh Steelers.

With an obvious need for pass rushers, it makes sense for the Steelers to do their homework on Adams and ask what he could offer to the team.

In doing my own homework on Adams, I can see why the Steelers would have interest in the dynamic outside linebacker. A former basketball player, Adams’ footwork and athleticism shine as he navigates into the quarterback’s pocket.

Dipping his inside shoulder parallel to the ground gives Adams the edge he needs to get his hands on the quarterback, forcing a fumble in the process. Adam’s speed off the line is the catalyst for his pass rushing abilities.

The more I witness Adams’ bend around the edge, the more I start to note two important observations. The first is that Adams’ bend is an incredible raw asset that can only improve with the right coaching. Having the right coaching leads me right into my second observation, as it is noticeable that Adams’ rushes off the line are very wide. This leaves a massive gap between the tackle and guard, giving offenses an easy alternative to run a draw play. Perhaps nitpicking, Adams’ wide pass rush is no deal breaker, simply a coaching correction he will face at the next level.

Moving from bending the edge to crossing inside, Adams’ possesses a nifty punch move that he can use to swipe away opposing linemen. Watch on the play below as Adams (LOLB) uses his hands to cross over the Ohio right tackle, coming up just short of a sack.

Adams’ quickness and hand work make him a difficult target for offensive lineman to get their hands on. It seems that the only time Adams finds himself being driven back is when he puts himself in the position to be driven back.

Already undersized at 245-pounds, Adams has to do a better job at holding the edge and cannot just let himself be taken out of a play. This includes being more patient at reading his keys as he fails to see the two pulling linemen coming right in his direction.

If Adams is drafted by the Steelers, it is no secret that he will be expected to defend against the run and do it well. What that means for Adams is less of the above and more of this.

Adams’ size and play tell contradicting stories of the Steelers’ level of interest and how his play will translate to the next level. While Adams is still a few traits and pounds (about 15) away from the typical Steelers outside linebacker, his athleticism and raw bend could make him an intriguing investment.

Games Watched: vs Toledo, vs Buffalo, vs Ohio, vs Wisconsin