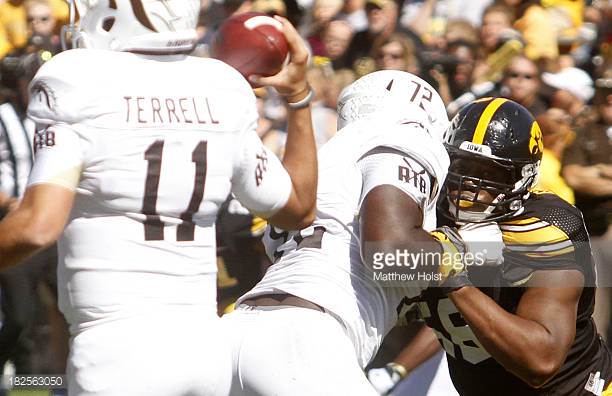 -Wide, strong base
-Powerful upper body
-Explosive hands that can control defender; once he latches onto defender play is over
-Fluid mover for player his size
-Really good at hooking defenders on outside runs, turning them inside to seal edge
-Gets to second level quickly looking for someone to block

-Can find himself well off balance and lunging towards defenders at second level
-Limited leg drive in run game
-Relies too much on strength of upper body; needs to learn to use athletic base more often on blocks
-Has to improve footwork as a pass blocker; doesn’t get enough depth in set often enough, or gets too much depth, allowing inside rush
-Slow to pass off twists and stunts

-Four-year starter for Western Michigan following redshirt 2012 season
-Lined up at right tackle for all 25 games of the 2013 and 2014 seasons before moving to right guard in 2015, receiving enough votes from MAC coaches to be named third-team all-conference.
-Moved back to the right tackle spot as a senior, earning first-team All-MAC and multiple All-American honors.

Coming into the evaluation process of Western Michigan’s Taylor Moton, I was expecting a freakish offensive lineman due to his insane combine testing numbers.

However, I came away feeling rather unimpressed largely because there wasn’t anything super impressive that jumped off the screen with the four-year starter in the MAC.

That being said though, Moton is a solid offensive lineman that can play guard or tackle at the next level, largely due to his strength, length and athleticism.

While at Western Michigan, Moton started out as a right tackle for his freshman and sophomore seasons before sliding into right guard in 2015 as a junior. But last season, as Western Michigan went undefeated and earned a berth in the Cotton Bowl, Moton slid back out to right tackle and was very steady all season long.

It’s important to keep in mind though that MAC pass rushers aren’t as high level as Power 5 conferences, so I was eager to get to the Cotton Bowl tape of Moton against guys like Wisconsin’s TJ Watt, Vince Biegel and Chikwe Obasih.

Moton more than held his own.

Against Watt here early in the game, Moton does a good job of getting depth in his set, giving him plenty of time to get his big paws on Watt, running him around the arc to give his quarterback time to throw the ball away.

Throughout the 2016 season Moton had trouble at times with speed rushers, but for the most part in the Cotton Bowl he handled Watt well, showing up on a big stage with plenty of eyes on him.

Later in the game, Moton got a shot at Biegel, a power rusher with some speed.

Biegel tries to straight arm Moton off balance, but the Western Michigan tackle handles it well and then is able to handle the spin move back inside, rending Biegel’s attempt at a rush moot.

As a run blocker though, Moton leaves a lot to be desired because he simply doesn’t get enough drive in his blocks despite having a powerful build.

As a guard against Georgia Southern during the 2015 season, Moton got off the ball well and moved in impressive fashion for a big man, but once he got into his block he seemed more inclined to stay with a stalemate instead of looking to drive his guy out of the hole.

Here, Moton gets into a stalemate and clogs up the hole, leading to a minimal gain.

Later on in the game though he finally came through with a pancake block.

At the snap, Moton does a great job of shooting his hands into the defender, latching on to his chest plate, allowing him to drive the defensive tackle off the ball before planting him into the ground for the pancake.

Although he doesn’t do this very often, the ability is there due to his impressive strength.

At the next level, Moton projects to be more of a guard, but should he play tackle, it will have to be on the right side once again. He should be able to handle his own, but not without early-career struggles that could lead to him getting extra help in pass protection.

I’d like to see him improve as a run blocker at the next level because I think he fits best in a power scheme. I trust that the offensive line coaches at the next level can get the most out of a moldable guy with a high ceiling.