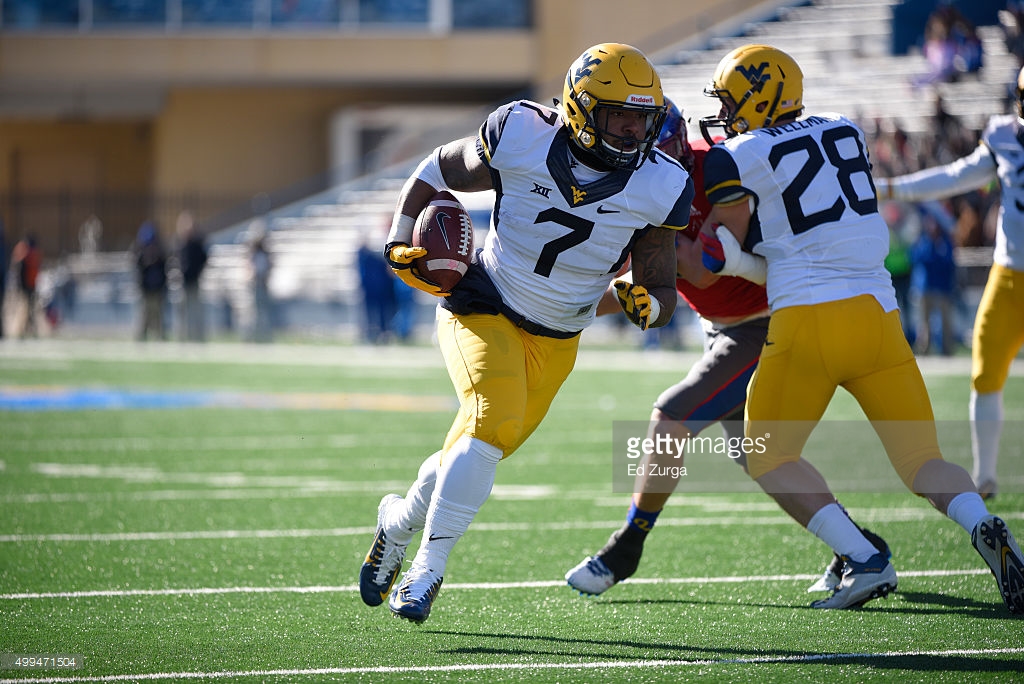 -Lowers shoulder with authority; consistently falls forward at the end of runs
-Good athleticism and wiggle in the open field for a back his size
-Flexible, fluid lower half with some explosiveness in short areas
-Low workload in college coming from crowded backfield
-Very comfortable running out of a shotgun-based offense

-Limited vision as a runner, often running with blinders on straight into OL
-Serious ball security issues in college
-Doesn’t possess breakaway speed for the position, often getting caught from behind in open field
-High pad level as a runner
– Limited receiving threat that has history of focus drops

-All-time leading rushing in Pennsylvania high school football history (9,078 yards, 110 touchdowns)
-Originally started career at Pitt before trying to transfer after freshman year; was blocked from following Todd Graham to Arizona State; committed to UCLA before backing out to try and return to Pitt; blocked from returning to Pitt by Paul Chryst, ending up at West Virginia
-35 career games at WVU (16 starts)
-Rushed for 2,102 yards and 20 touchdowns as a Mountaineer; added 49 receptions for 341 yards
-Shared backfield with Philadelphia Eagles running back Wendell Smallwood and current Mountaineer Justin Crawford during time at WVU
-Struggled with ankle injury and concussion in senior season

Hailing from Western Pennsylvania, the hype train has surrounded West Virginia’s Rushel Shell since he was a freshman running back at Hopewell High School.

Originally committing to the Pitt Panthers and playing one season there, Shell was destined for greatness at his hometown school, but things went south quickly with him winding up at West Virginia.

Leaving home with plenty of hatred thrown his way from fans and former teammates, Shell used it as fuel and turned in a rather respectable college career with the Mountaineers despite sharing time with Philadelphia Eagles running back Wendell Smallwood and current Mountaineer Justin Crawford.

Sure, he’s a case of a highly-touted player not really living up to the hype, but that hasn’t hindered his NFL prospects.

As a power-packed running back, Shell has some serious wiggle to his game thanks to some lower body explosion that can surprise you on film.

Taking the draw out of the shotgun, Shell shows some impressive lateral explosiveness on the jump cut before turning on the jets to reach the end zone. Although he doesn’t have the desired breakaway speed in the open field over a long run, he’s really quick and explosive in short areas, which should help him carve out a complimentary role at the next level.

Shell is really comfortable and at his best running out of the shotgun.

He’s a guy whose vision seems to improve when out of the shotgun, which is strange. But that’s what I see on film.

He’s also a load in the open field, often looking to punish defensive backs when he gets to the second level. With his size and lower body build, that’s what I want from him.

I’d rather see runs like this of 10-12 yards capped off by a big blow to a defensive back from him rather than see him try to juke and go down via arm tackle.

Capping things off, this play really stuck out to me from Shell’s time at West Virginia.

Bottled up at the line in a goal line situation, Shell has the whereabouts to backtrack out of a big hit at the line to get to the boundary for the score. He’s a powerful back, and that trait alone should give him a shot at the next level.

As I said earlier, it’s fair to say he’s a failed college player considering the hype surrounding him. It’s also fair for Pitt fans that read this to want nothing to do with him whatsoever, but he’s going to get a shot at the NFL, and I think he’s one that can stick around for awhile as a complimentary running back due to his power and shiftiness in the open field.

He most likely won’t hear his name on draft day, but he’ll certainly be one of the hottest commodities as a priority free agent.