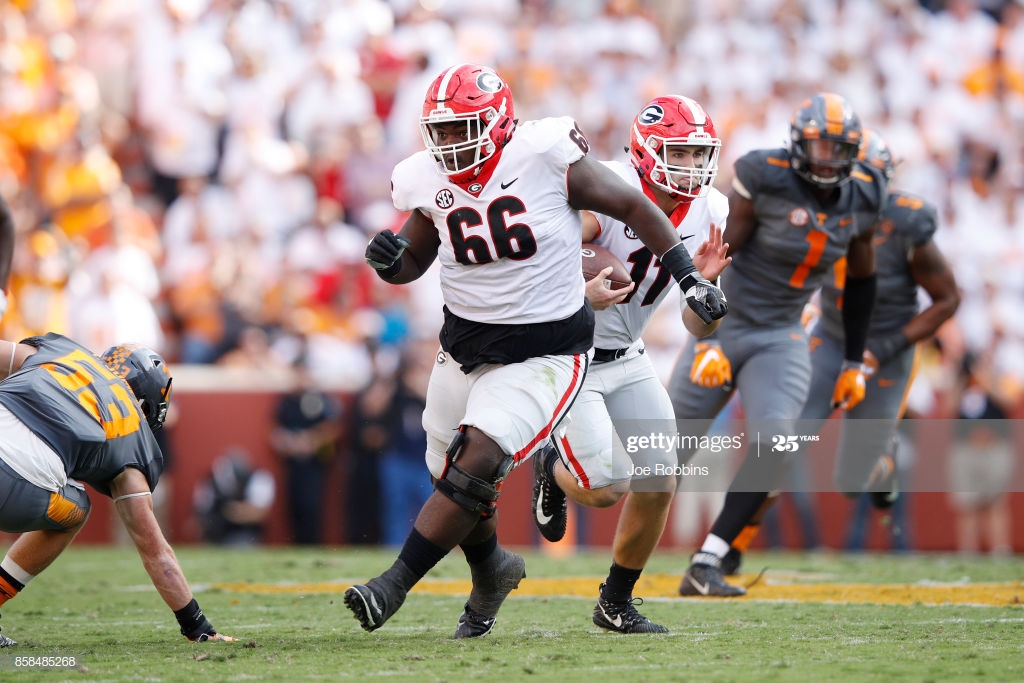 – Large frame whose hard to get around in pass protection
– Matches size with play strength, stout at point of attack and shows anchor in pass pro to stall out bull rushes, even when he doesn’t play with proper technique
– Generates movement on first level blocks, plays with power and physicality as a run blocker
– Has an edge and looks to finish blocks and plays, looks for work when uncovered in pass pro and isn’t passive
– Good recognition of stunts and blitzes
– Powerful strike with good hand placement on his punch
– Solid starting experience against top-flight competition
– Some versatility, time at both guard spots
– Leader and well-regarded in locker room

– Sloppy body, needs to drop more weight and there may be weight concerns throughout his career
– Lacks length (32 1/4 arms) and has trouble keeping his face out of pass protection, causes him to lean in or allow rushers into his chest and upright him
– Base gets too wide in pass protection
– Slightly better athlete than expected but struggles to work and stick at second level against linebackers
– Recognizes stunts and blitzes but lacks lateral agility to get to his spot
– On ground too often
– Waist-bender who doubles over and loses his base in pass protection, losing power and making him easy to shed

Solomon Kindley is a hard man to miss at 337 pounds and that weight helps and hurts him. On the plus side, he’s a wide body who generates movement in the run game. On combo blocks, he can struggle in the second level but shows power on the first level, displacing nose tackles before climbing to linebackers. Like here vs LSU. He’s the LG in all these clips.

And in pass pro, he has the strength to stall out bull rushes and when it all comes together, his grip strength and massive frame makes him an effective pass protector.

But he’s a squatty, sloppy body, lacking length and even average athleticism to play in space. Against LSU in 2018, he couldn’t touch Devin White at the second level, who ran around him and made tackles all game.

White is a special athlete but Kindley is going to see more of those in the NFL. Not less. He’s also on the ground too often. Not coordinated enough and plays too over his toes as a run blocker and in pass protection.

While Kindley has rare size, he’s too heavy for the NFL and I’d like for him to get under 330. He’ll still be a big dude at 327 pounds. And I worry that at the Combine, he still weighed in at nearly 340 pounds. How much was he playing at during the season and then got his weight down for Indy? Even in a relatively weak interior offensive line class, Kindley’s lack of athleticism is going to get exposed by quick pass rushers. Similar to Damien Mama, part of the 2017 draft class.