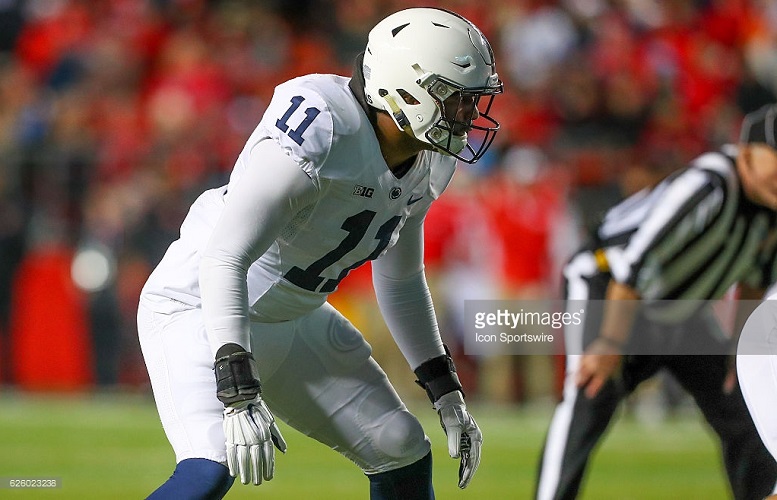 Many Pittsburgh Steelers may already be familiar with the name Brandon Bell. Playing outside linebacker in Penn State’s 4-3 defense, Bell was one of the defense’s top producers over his collegiate career. By also adding statistically great senior season to his career resume, Bell is another name in play for a late round linebacking option.

Bell benefits from possessing a high football IQ and playing with great discipline. The Penn State linebacker is often the first one to the ball carrier on misdirection or cutback runs. This is not due to any eye-opening athleticism but because of a disciplined read and react style of play that Bell has perfected.

Bell only takes a few false steps to the offense’s right before coming back downhill to make the stop on Wisconsin running back Corey Clement. It is a challenging task to fool Bell between the tackles, as the Penn State product is not one to risk a big play for a blown assignment.

From a purely technical standpoint, it is hard to find a flaw in Bell’s game as the linebacker has all his techniques down to a tee. Bell takes efficient routes to the ball and keeps his eyes on the ball carrier while fighting off blocks. Watch below as Bell fights off a block and meets Ohio State running back Mike Weber exactly where he expected to meet him.

Playing as the outside linebacker in Penn State’s 4-3, Bell was asked to drop into coverage quite often, providing more than serviceable production. Bell displayed a feel for covering his zone depth and was often in the right position to make a play on balls in his area.

Below is Bell’s first interception of his senior season, coming against Kent State. Bell drops back and is in perfect position to get his hands on an errand throw from the Kent State quarterback.

Like many mid-late round prospects with high awareness and football IQ, Bell’s limitations come from a lack of natural athleticism. While Bell may not be the slowest linebacker in this year’s draft (4.68 40-yard dash time), he does suffer from being heavy on his feet and lack of top level strength.

With just 15 reps on the bench press at his pro day, Bell’s lack of overall strength is a major concern. The Penn State linebacker will find himself engaged with blockers but unable to muster his way out of trouble, instead letting the blocker dictate his dominance on the play.

With a lack of quickness, Bell struggles to match opposing speed to the sideline and square up elusive ball carriers. Without the foot quickness to adjust to a lateral target, Bell presents a liability when tasked with stopping a quicker target.

Despite his limitations in athleticism and overall ceiling, Bell has garnered some interest from NFL teams such as the Eagles, Jets and Giants. While the Steelers did not ask Bell to visit like their state rivals, the Penn State product could always be added as a training camp body and special teams contributor.

Games Watched: vs Ohio State, vs Michigan State, vs Wisconsin, vs USC