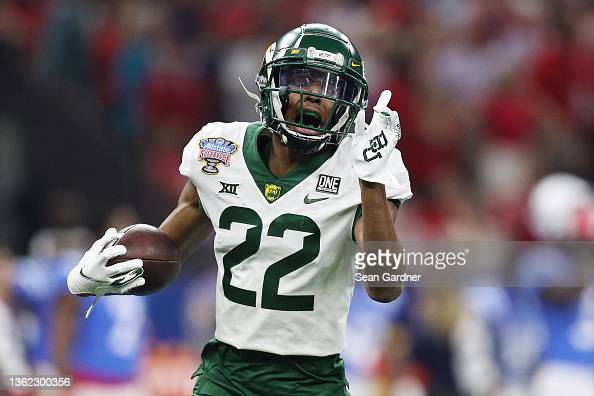 From now until the 2022 NFL Draft takes place, we hope to scout and create profiles for as many prospects as possible, examining their strengths, weaknesses, and what they can bring to an NFL franchise. These players could be potential top 10 picks, all the way down to Day 3 selections and priority undrafted free agents. Today, I’ll be profiling a safety prospect that has been a team captain for a tradition-rich Power 5 tam and has the NFL bloodlines you search for yet has flown completely under-the-radar throughout the pre-draft process.

*All Values from Pro Day

— Possesses great height and length for the position
— Has long limbs that allow him to cover ground quickly in the open field
— Has great play speed and burst, being able to trigger downhill quickly in run support or on underneath throws
— Track background shows up in how he flies around the backend of the defense
— Primarily played deep/split zone safety, but also rolled up into the box and in the slot at Baylor
— Opportunistic safety that has a knack for finding the football
— Will switch from route to route when in off-coverage, looking for opportunities ot make a play
— Instincts and reading the QB’s eyes take him to the ball, having the ball skills to convert those to picks
— Has nine INTs the last two seasons, and tied the FBS lead with six in 2021
— Comfortable in his backpedal and can open in transition
— Long speed and length aid his ability to play centerfield and recover if initially beat
— Breaks on the ball quickly in front of him, eating grass as he comes downhill
— Will smack pass catchers catching the ball underneath and will throw his shoulder into running backs coming from overtop
— Will fly in from the backend to chop down ballcarriers by their ankles, occasionally breaking down to go through them

— Can stand to add a little more meat on the bones for the physicality of the NFL game
— Best suited for free safety duties at this juncture
— Short-area quickness and fluidity in man coverage at the top of the route could use work
— Will get overly aggressive looking to make a play and lose track of deep is deep on the backend
— Likes to freelance too often on the backend, leading to missed coverages at times
— Can be a tad indecisive when arriving at the catch point from centerfield, failing to attack the ball in the air or force the incompletion
— Will come in too fast at times as a tackler, often leading to missed attempts where he is out of position or dive/arm tackles the ballcarrier

JT Woods is a member of a productive Baylor Bears defenses that looks to have several members hear their names called this draft weekend. While the senior defensive back led the Big 12 in INTs and tied the FBS lead with six this past season, his name hasn’t been floated around with some of the other top safeties in this draft class, including his teammate Jalen Pitre. Part of this can be the wildcard/feast-or-famine mentality that Woods often plays with on the backend. He is constantly looking to make plays on the football which leaves him susceptible to losing coverage responsibilities at times, including when he is in-charge of playing deep like on this play against Oklahoma where he gets caught starring into the backfield.

He also can be a tad indecisive at times on the backend of the defense when he must play centerfield and show off his range to aid the corner down the field in deep coverage. Whether it be being tentative at playing the football in the air or light up the receiver on contact to force the incompletion, Woods can play with a little more confidence and aggression in these situations. Watch here on this rep where Woods arrives and is in position to attempt to jar the ball out, but he hesitates and waits for the receiver to catch it and come down before giving him a light pop of which Woods falls and the receiver keeps running.

Another big knock on Woods’ game is his inconsistencies as a tackler. He often is required to run in full speed from the backend of the defense to aid in run support or cut down receivers that catch underneath/screen pass. This causes Woods to occasionally come down out of control, being susceptible to being sidestepped in open space like on this first play against the Sooners or on the following play where he reaches out to arm tackle the ballcarrier, ending up on his face rather than running through on contact.

Still, there are so many of examples on tape of Woods flying in and chopping down receivers and running backs alike, showing off his elite track speed and acceleration in the open field to break on the ball and cover ground in a hurry to limit the amount of yardage gained by the runner. Here is an example of Woods flying in from overtop and attacking the ballcarrier’s legs to bring them down at full speed.

For those that say that Woods is afraid of contact and isn’t a big hitter, that statement would be far from the truth. He invites contact as a hitter and will put his shoulder into ballcarriers looking for the light up shot. Here are a couple examples of Woods and his physicality as a tackler, again showcasing his ability to break on the ball and aid in run defense and passes thrown underneath.

Woods does a good job reading the QB’s eyes in coverage and can seamlessly go from one route to the other in attempt to make plays on the ball when it is thrown. Watch on this play against Oklahoma where Woods starts out tracking the outside receiver at the bottom of the screen, but then breaks on the pass thrown over the middle to the slot receiver, giving the intended target a forcible hit as the ball arrives to force the incomplete pass.

While he didn’t pick off any passes in his first two seasons on campus, Woods has made himself into quite the ballhawk for the Bears the last two seasons, picking off nine passes of which he has taken one back to the house. He is an opportunistic safety that can read the QB and bait him into throwing the pass over the middle, having a knack of knowing where the ball is going and successfully jumping the route to get the turnover for the defense. Here are two examples of Woods being in the right place at the right time to make a play on the football.

I got on Woods previously for being a bit tentative at the catch point at times, making many suggest that he can’t play that single-high safety role until he can prove trustworthy. While I do think he needs to be more consistent, there are instances on tape where Woods attacks the ball in the air, using his impressive leaping ability and long frame to go get the football like it is his. Watch this jump ball INT Woods makes at the beginning of the game against the Rebels in the Sugar Bowl, rising up to go get the ball in-between the receiver and another defender in the area to secure the INT, the first of two he makes in the bowl victory.

Overall, JT Woods is an enticing prospect at the safety position that combines good size and length with elite athleticism as well as a knack for making splash plays for the defense. He is a willing tackler that con cover ground in a hurry and has the skill set to be a capable free/split zone safety but offers teams the coverage versatility to be deployed in a variety of spots. Woods must play with better decisiveness and discipline in coverage to earn single-high duties and prevent big plays over the top and improve tackling and run support consistency but his length, burst and sticker mentality to impact catch tries and take the ball away can become a weapon for teams that can properly groom him.

When watching Woods fly around the field and make plays on the football, I couldn’t help but think of current Baltimore Ravens S Marcus Williams. Williams starred at Utah and was a ballhawk himself for the Utes, racking up 11 INTs and eight PBUs in three seasons. Along with the playmaking ability, Williams showed to be a willing tackler from the safety spot, flying in to make plays to impact the catch point on underneath throws and aid in run support. Add in the fact that Williams shares a nearly similar frame (6’0 5/8”, 202lb 32 1/2” arm) and athletic testing (43 1/2” vert, 10’9” broad, 14 bench reps) as Woods, the comparison makes sense for the role that Woods will likely play.

Williams was more polished coming out of Utah and more aggressive at the catch point which made him an early second round selection in the 2017 NFL Draft. Still, I don’t see Woods going too much later, having that similar skill set and even better play speed, but just needs to be reeled in a bit to maximize the good traits and minimize the mental errors. In the case of the Pittsburgh Steelers, they already have a FS type in Minkah Fitzpatrick in-tow. However, should they want to add another playmaker on the backend that provides more coverage ability and splash plays than Terrell Edmunds, Woods could be an interesting middle round selection that form an opportunistic/interchangeable safety tandem of the future in Pittsburgh.