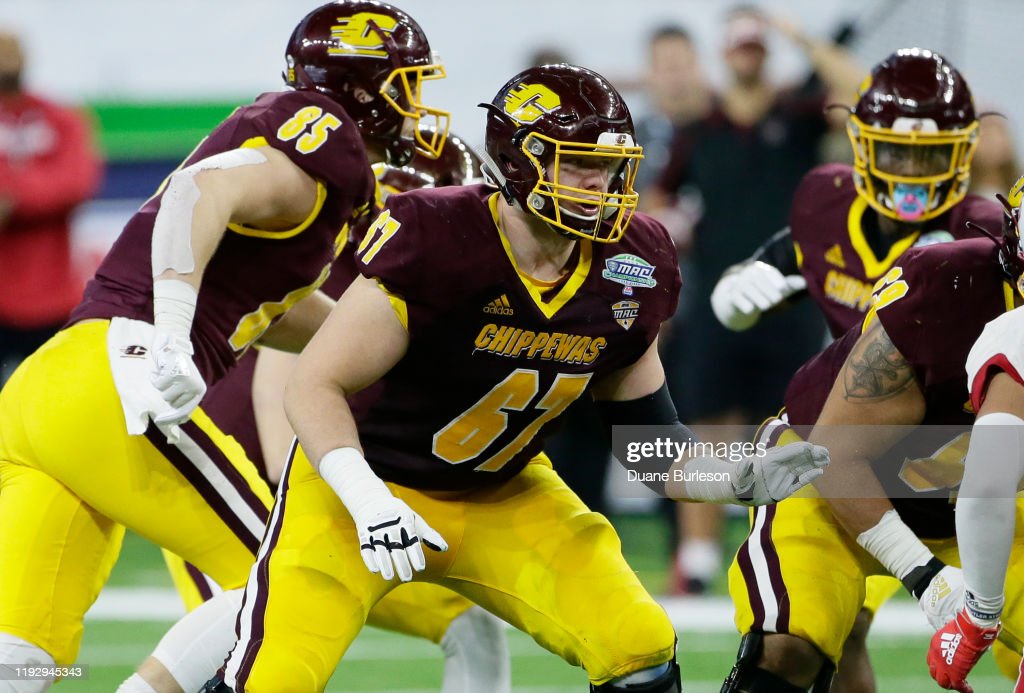 From now until the 2022 NFL Draft takes place, we hope to scout and create profiles for as many prospects as possible, examining their strengths, weaknesses, and what they can bring to an NFL franchise. These players could be potential top 10 picks, all the way down to Day 3 selections and priority undrafted free agents. Today, I’ll be profiling Central Michigan OL Luke Goedeke.

— Good bulk and fills out frame well
— Excellent grip strength and ability to lock onto block, especially at second level on run blocks, able to hit and stick to a moving target at elite level
— Solid run blocker with functional strength, unlocks hips, drives feet and plays through the whistle
— Aggressive, physical demeanor and wants to bury guys, shows physicality in pass protection too with traps and finish
— Good IQ/ID and ability to pick and pass off players in stunt pickup
— Strength to reset and stall out bull rushes
— Shows good burst out of stance in the run game, effective skip puller
— High-effort player who doesn’t quit or give up on plays, even in scramble drills
— Has not played a ton of football at his current position and has room to grow

— Has height/weight but lacks length of a NFL tackle
— Struggles most with speed rushers around the edge, tendency to double-over trying to seal edge or when defender counters inside
— Needs to shoot his hands quicker in pass protection, perhaps play with hands higher too in his stance, defenders get into his chest too easily and stand him up
— Doesn’t appear to be a high-level athlete whose best home is likely inside at guard
— Struggled more against better players/competition, beat up and dominated lesser teams and talent that improved overall tape
— Lingering injuries throughout his football career
— Only played one position in college

— Two-year starter at RT
— Suffered hamstring injury during Day One of Senior Bowl practices, did not finish rest of week
— Missed all of 2020 season with knee injury
— Played TE and DL in high school and began college career at TE before switching to o-line with CMU
— Spent one-year as TE at Wisconsin Stevens-Point before transferring to CMU, caught 12 passes that year
— Listed at 6’4, 230 pounds in high school, 250 pounds first year of college, ate 7000 calories a day to bulk up to be an offensive lineman, eating six to seven meals a day
— Played through shoulder injury senior year of high school (shoulder separation)
— Double major in chemical engineering and paper science
— Turns 24 in November

Luke Goedeke is a name flying under the radar throughout the draft process, in part due to a hamstring injury that’s limited him over the past few months. Hurt day one of the Senior Bowl, aggravated in training, and he hasn’t tested since, though he did workout at his Pro Day (a lack of training is probably why he didn’t go through things like the 40 and agility drills).

A right tackle in college, Goedeke legitimately possesses some of the best grip strength and second level ability of anyone I’ve watched in this class or even recent memory. He can not only reach the second level but stick and drive instead of falling off or forcing the linebacker to change his angle. Bunch of clips here. He is the right tackle, #67, in all the clips of this post.

Goedeke is also an impressive first-level blocker and loves to bury people in the run and pass game. He plays with the demeanor you want up front.

On the negatives, he struggled most with outside rushes and counters. That’s when he lost the most and doubled-over.

His worst tape came against LSU’s defense and the Miami (OH) game against likely draft prospect Dominique Robinson. Watching that Miami game especially and Goedeke beat up on the other guys and struggled the most with Robinson. A little compare/contrast. First two clips against Robinson (#11), the next two against other guys.

Overall, I think Goedeke isn’t long or quite quick enough to play tackle at the next level. But I think a move to guard would be the best thing for him and he could excel there. He wouldn’t have to worry about losing the edge as much against speedy rushers and would be a terrific run-blocker, especially climbing on zone/combo blocks and as an effective puller on trap blocks. He’s still learning the game but shows refinement as a run blocker. Some teams will view him as a center too but I think he’s an interior guy all day.

I do have some worry about him staying healthy. He’s battled a lot of injuries in his career, even dating back to high school. I know this guy played a good deal of his career at tackle but I got Nick Kaczur vibes from Goedeke.