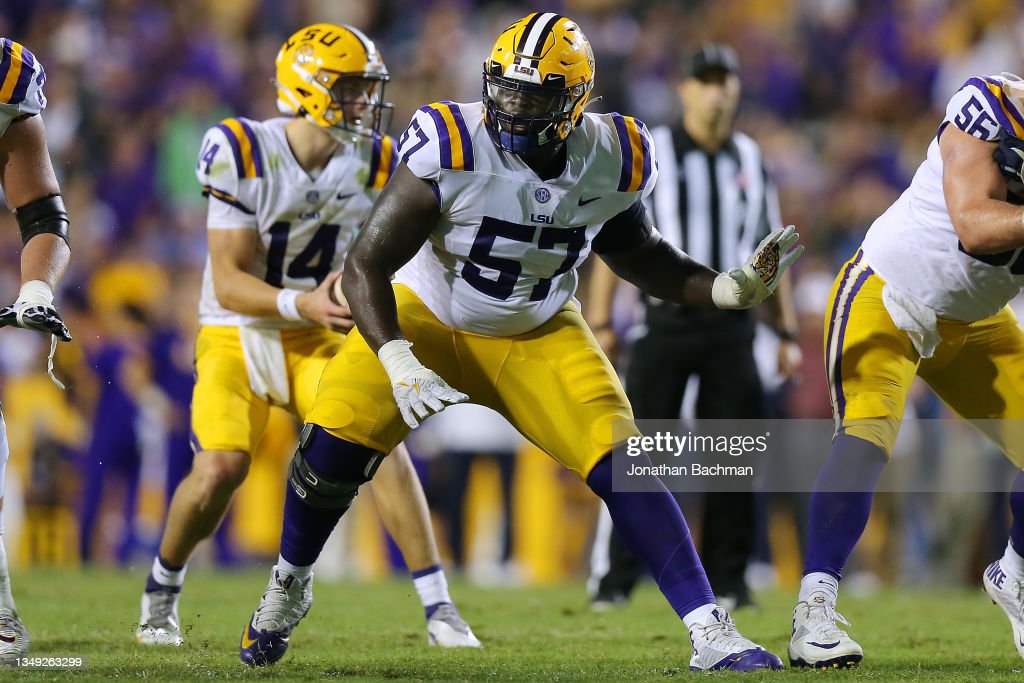 From now until the 2022 NFL Draft takes place, we hope to scout and create profiles for as many prospects as possible, examining their strengths, weaknesses, and what they can bring to an NFL franchise. These players could be potential top 10 picks, all the way down to Day 3 selections and priority undrafted free agents. Today, I’ll be profiling an interior offensive lineman from the SEC.

— Not a good fit for outside Zone scheme
— Consistent block sustain could be better
— Will get overaggressive and duck head at contact
— Lateral agility to mirror is marginal
— Gets on his heels in vertical sets hurting his balance
— Turned his body on stunts opening lane behind him
— When uncovered, will focus in one direction a little too long
— Weight was high in 2021. Can he maintain lower weight?

— 35 games, 17 starts
— Has 17 starts at RG, 1 at LG, Backed up center in his first two years
— Came to LSU as a defensive lineman
— Missed three games in 2020 to undisclosed injury late in the season
— Majoring in sports administration
— NFLPA Collegiate Bowl invitee
— Late addition to Senior Bowl roster

Chasen Hines cut his teeth in the SEC and reportedly met with the Steelers at the Combine. He has experience playing both guard positions and was the backup at center.  He has good size and length and has a thick lower half with a big bubble. Let’s see if he fits into the profile that new offensive line coach Pat Meyer likes.

As a run blocker, he best fits in a Power/Gap running scheme. He has good snap quickness and fires out with good pad level and aggressiveness. The placement of his hands is good and the grip strength is even better to lock on to defenders. On down/drive/base blocks he uses his strong lower half and leg drive to displace opponents. When pulling he uses solid quickness, good mental processing to identify his target and good pad level when engaging. He was solid on double team blocks and on combo blocks got a good push at the first level before climbing to the second level with solid timing and quickness. On any level, when he locks on with his hands he is difficult to get away from.

Here are some clips to look at Hines on the move.  He is blocking in space, on the short pull to the right, the long pull to the left and the wham block. Good mobility for the big man.

At Kentucky, Hines shows his ability to get push and drive defenders off the ball.

At Alabama, a couple more clips showing his pad level and leg drive to try to move defenders.

Here are a few clips of him climbing to the second level and blocking the linebacker.

One last clip run blocking at this is at the goal line. It’s nice to see him stay low and drive the defender into the end zone.

As a pass blocker, he has good quickness out of his stance and is most effective on quick/jump sets when he can engage quickly and use his hand strength and play strength. He has good punch timing and heavy hands to stun rushers and good strength to anchor and slow pass rushes. To counter defenders, he actively works his hands to keep his chest clean. Improvement was shown on stunts and twists and he looks to help teammates when uncovered. Currently he handles power rushers better than speed. LSU didn’t use a lot of screens but he was solid getting out in space and locating his target.

At UCLA, he will set inside to engage the defensive tackle, locks on with his hands and shuts down the power rush.

At Alabama, a couple clips in pass pro. The first shows nice use of his hands independently to keep the defender at a distance. The second is another lock on and control of the defender.

At Alabama, this is one of the rare screens to show his mobility and physicality to pick out a defender and clear the road.

His lateral agility is marginal and is not a good fit for an outside zone scheme. The timing to sustain blocks varies leaving him to disengage to early. On pull blocks and some base blocks, he can get overaggressive and lunge into the block diminishing effectiveness. Keeping his base under his pads would improve his balance. Lowering his head, when engaging a defender is occurring leading to missing blocks.

When vertical setting, he gets on his heels and this limits his ability to mirror with lateral agility. Improving his feet to mirror would allow him to sustain longer. On stunts early in the season he would carry the penetrator too far inside and turning his body leaving his gap open.

Vs Auburn, he will get on his heels and a bit upright, allows the hands to his chest and gets bulled back. This was not a common occurrence with his anchor.

At Alabama, the defender uses a lateral jump chop to get on the edge and Hines can’t recover.

Overall, Hines has good thickness, length and play strength. His best fit is in a Power/Gap running scheme to allow him to drive defenders and use his agility to pull/fold/wham block. In pass protection, he is best in jump/quick sets to allow him to engage, lock on and stop a rush before it gets started. Areas to improve include consistent block sustain, ducking his head and over aggressiveness on run blocks. Also, working on his vertical pass sets and ability to mirror in pass protection would be beneficial.

Hines was listed at 350 lbs. on the LSU roster and from what I have read that was way above normal. He weighed in 23 lbs. lighter at the Combine which is good but weight control may be something to monitor as well as the undisclosed injury causing him to miss three games.

Meyer likes offensive lineman with strength, length and aggressiveness so Hines would definitely fit into what he wants. The Steelers have been trying to improve the running game for the past couple years and adding people movers up front would help greatly. Hines has some work to do with technique but the core qualities are there. He would be a quality backup at guard with the potential to start in the near future and he would also likely get a look at center to at minimum be a backup.

Projections from other draft lists have him from the 150 range down into the 350+ range but for the right team he could go a little higher. For a player comp I’m going to go with a former LSU Tiger Damien Lewis. They have similar body types, measurables and playing styles.

Games Watched: 2021: At UCLA, vs Auburn, At Kentucky, At Alabama, Vs Kansas State