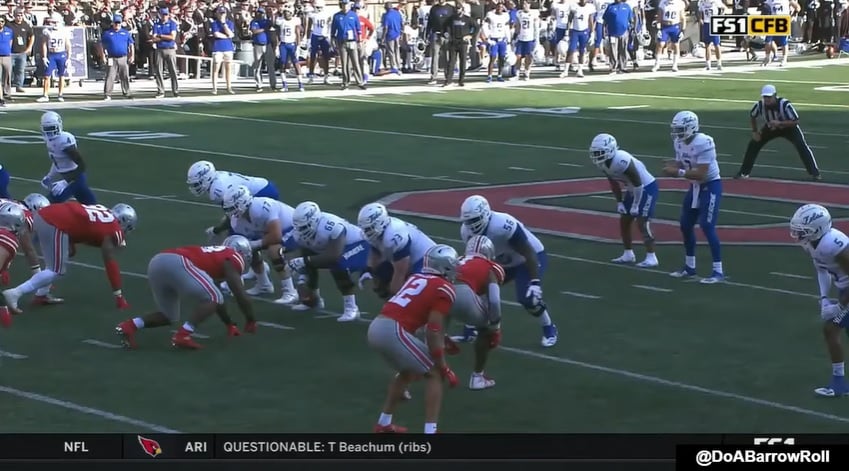 From now until the 2022 NFL Draft takes place, we hope to scout and create profiles for as many prospects as possible, examining their strengths, weaknesses, and what they can bring to an NFL franchise. These players could be potential top 10 picks, all the way down to Day 3 selections and priority undrafted free agents. Today, I’ll be profiling a defensive back prospect that starred at multiple spots in the secondary during his three years in college and could be a unique chess piece for defensive coordinators that deploy him correctly in their scheme at the next level.

— Has the size and frame you look for in an offensive tackle prospect
— Thick build made for moving people in the run game
— Has long arms and strong hands to latch onto his opposition
— Possesses a vice-like grip that neutralizes the rush when he gets his hands on defenders
— Extremely strong player that will overpower his opposition for pancake blocks
— Aggressive play demeanor that wants to finish defenders to the turf and stare them down afterwards
— Effective at down blocks and kick out blocks to create seals in the running game
— Able to absorb rushers on the bull rush and keep them from moving him backward
— Has the athleticism to get to the second level of the defense to pick up linebackers and safeties in the box
— Can quick set pass rushers and get his hands on them early to stall the rush
— Can make pass rushers run the arc, having decent recovery ability to keep the pocket clean if the QB steps up
— Doesn’t turn 21 years old until April, plenty of room to grow

— Doesn’t have that quick twitch out of his pass sets or upper-level athleticism on the move
— Vertical pass set needs work to gain more depth of the pocket
— Plays extremely high most of the time out of his stance, needing more hip and knee bend to properly anchor as well and move laterally in pass protection
— Hands remain down out of his stance, being slow to land his punch at times as he telegraphs it to his opposition
— Needs to be more accurate with his punch as he tends to strike high and outside the defender’s torso, leading to whiffs or holding calls
— Needs to do a better job sustaining his blocks
— Will allow defenders into his chest with inconsistent timely punch, allowing them to win the leverage game at times
— Footwork needs a lot of work working side-to-side to prevent defenders from crossing his face inside or allow pass rushers around the corner
— Lack of kick step on pass set leads to him losing often to speed rushers on the edge, causing him to panic and attempt to hold the defender
— Called for 16 penalties in 2021 alone

— Redshirt Sophomore prospect from Fort Worth, TX
— Born April 3, 2001 (Age 20)
— Former three-star offensive line prospect out of North Crowley High School in Fort Worth, Texas where he played guard and tackle in his career
— Redshirted in the 2019 season, but played in the final four games of the year and started two games at left tackle
— Played and started at left tackle in all nine games in 2020
— Played and started 13 games at LT in 2021
— 24 career starts, all at left tackle at Tulsa
— The one word he uses to best describe himself is “comedian” on his team bio page
— Freshman All-America selection in 2020

One name that has been picking up steam in the draft community that hasn’t garnered the same attention to the general public at the moment is Tulsa OT Tyler Smith. The 6’6, 332lb redshirt sophomore decided to declare at the eleventh hour, and many draftniks and analysts alike were overjoyed in his decision to do so. Smith is a big, powerful, and nasty mother who has often been referenced at the “Ickey Ekwonu” of the Group of Five level. The dude is a mauler upfront that likes to impose his will on smaller defenders across from him like we see in this three-play complication against Cincinnati this past season.

Smith is powerful at the point of attack, having the aggressiveness and leg drive to overpower his opposition in front of him. He is an effective down blocker as we see on this play against the Bearcats, winning the stalemate with the interior defender and pancakes to him into the turf. He takes him into the running lane of the back rather than kicking him out away from the play, but he still showcases his strength and power.

This next clip showcases Smith’s strength as a run blocker when asked to make the kick out block on the edge defender, fitting his hands inside the defender’s chest and runs him out of the play, chucking him to the ground for good measure at the end of the play.

Later in the same game, we see Smith do the exact same thing against another defender that lines up across from him, overpowering the edge rusher and tosses him away from the play.

When it comes to pass protection, Smith does a great job digging his feet into the ground to stall the rush against power rushers. He not only has the physical strength to displace defenders in the run game, but also anchor in against the pass rush like we see on this rep against Ohio State.

Here is another example against Houston of Smith digging his feet into the turf and using his vice grip hands to prevent the defender from disengaging the block to stall the rush. You notice Smith comes high out of his stance and gives ground initially and has his hands outside the defender’s shoulders, which raise concerns which will be detailed later, but it’s still an impressive feat of strength for Smith to neutralize the rush here on this play.

As mentioned above, Smith has the physical tools to be a dominant offensive lineman, but his technique needs a lot of refinement before being trusted with making the jump to the NFL. His hand placement and punch are erratic when making contact with defenders, often leaving his hands down by his side on the snap and telegraphs his punch. He also comes out nearly upright out of his stance in pass protection like we see here against the Buckeyes, standing straight up with poor hand placement on #11 Tyreke Smith who walks him back into the QB and nearly gets the sack if Smith doesn’t grab his outside shoulder and yank him down as the QB releases the ball.

Because of poor hand placement and inconsistent footwork, Smith often relies on grabbing outside the defender’s framework to try and keep the pocket clean, ultimately resulting in penalties. Smith was charged with 16 penalties in 2021 alone due to his inability to be in position to make or sustain blocks. Here is one example against Houston where Smith immediately gets beat off the ball against the edge rusher, causing him to jump out and grab his shoulder around the corner, getting the yellow hankie thrown at him as the defender runs the arc and forces the QB to scramble out of the pocket into the rest of the defense in pursuit.

Here’s another example from the same game against the Cougars where Smith gets a poor set out of pass protection, grabbing the defender’s inside shoulder and back and suplex him to the floor, yet receives another holding call for having his hands outside of the legal strike zone.

Smith’s inconsistent effort in the finite details is a cause for concern if he wants to play on the blindside at the next level as the technical flaws in his game are littered throughout his tape. Here is another instance against the Buckeyes and Tyreke Smith where Tyler Smith comes out of his stance with his hands down and standing straight up, causing him to be off-balance and susceptible to the long arm and counter inside across his face by the edge rusher, thus turning his shoulder to open the doorway to the QB as he latches onto cloth and hopes the passer gets rid of the ball.

Overall, Tyler Smith is a young, physically gifted player that has the makings to be a mean, nasty blocker in the league. He is best suited for a power/gap blocking scheme where he can impose his will on defenders and become a presence on the offensive line especially in the run game. However, Smith is extremely raw as a prospect and needs plenty of work on his overall technique and consistency as a pass protector to avoid becoming a turnstile at the next level and get his QB smacked around as a potential blindside protector. While he has the tools to play tackle, he will need some key refinement before being deployed confidently to keep his QB upright and avoid the penalty bug.

One pro comparison that immediately stuck out when watching Tyler Smith was another former offensive tackle that kicked inside to guard at Tennessee and made a home at the position in the league is Kansas City’s Trey Smith. Both Smiths share nearly identical size and frames, similar masher play styles as maulers in the run game, but also the questions of refinement with hands and footwork coming out of college. Trey Smith has been highly touted as a steal in the sixth round for the Chiefs this season, but he also has had struggles in pass protection, allowing four sacks and was called for nine penalties in his first season in the league according to Pro Football Focus.

For Tyler Smith to have success in the league, I personally would suggest a similar move that Trey made and kick Tyler inside to guard where he could operate in a phone booth and be a bull in a China shop, moving the man across from him in the run game and attempt to neutralize power rushers inside rather than go up against NFL-caliber pass rushers. Still, his base and hand placement need to improve regardless of his position in the league to be a consistent, reliable starter at the next level. The upside and traits are there for Smith to be a quality starter, but the bust potential is there as well for him to flame out if not properly developed.

Pittsburgh could use help at both tackle and guard in 2022, and while Smith is definitely a name to keep on the radar as a likely welcome addition in the run game, he will need time to develop before he can be counted on as a reliable starter which is something that plagued Pittsburgh for much of the season last year.