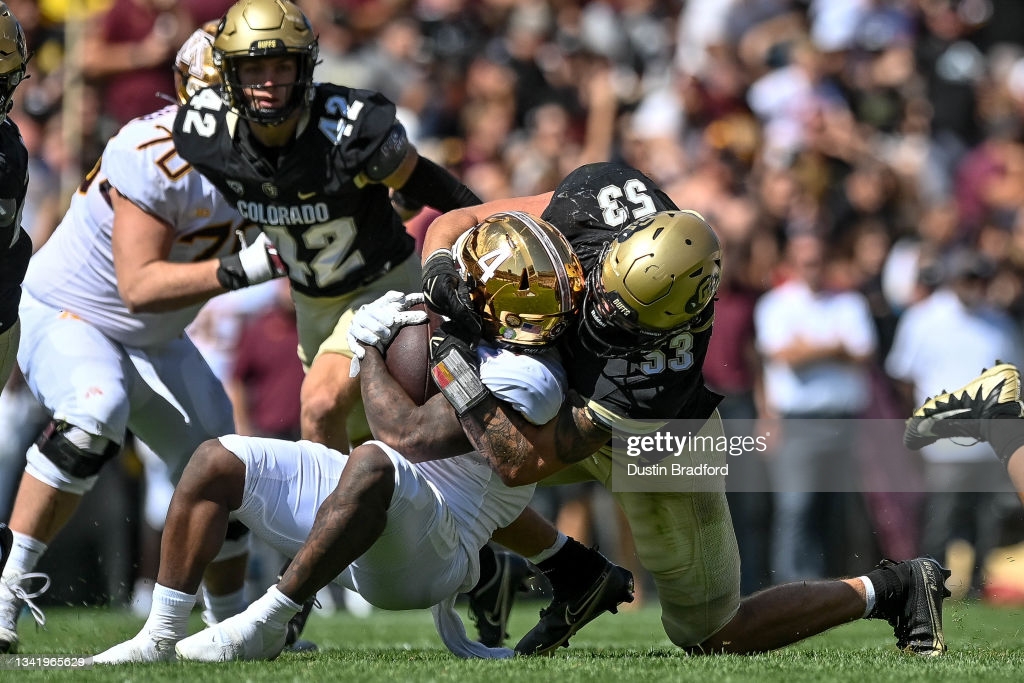 From now until the 2022 NFL Draft takes place, we hope to scout and create profiles for as many prospects as possible, examining their strengths, weaknesses, and what they can bring to an NFL franchise. These players could be potential top 10 picks, all the way down to Day 3 selections and priority undrafted free agents. Today I take a look at a tackling machine from the University of Colorado.

— Limited athletically; speed and change of direction are below average
— Inconsistent reading the mesh point on read option plays
— Struggled versus inside Zone/Gap runs where he needs to wait for the RB to cut first
— Pad level is high with difficulty getting off blocks on the second level
— Doesn’t recognize blocks coming from his sides
— Marginal lateral agility to match offensive player movements
— Lacks Man coverage ability

Landman was a highly productive linebacker in his collegiate career. He finished with nineteen games with double digit tackles. His final two seasons were cut short by injuries and he still finished nearly 350 tackles. He was an inside linebacker for the Buffaloes.

Against the run, he displayed very good mental processing against power run scheme plays and outside runs. He reads his keys quickly and has good short area acceleration to attack downhill and get into the gap. He shows solid ability to sift through traffic on plays in front of him. While attacking gaps he demonstrated good agility to duck under blocks to get to the ball or to take on pulling blocker to disrupt running lanes. He uses solid hand placement versus blocks on the second level. He reacts well to outside runs with eyes on the ball, his angles are good to the ball and makes strong, wrap-up tackles or will drive through on the ball carrier limiting yards after contact. He plays with good physicality and solid chase pursuit to the ball.

Vs Texas A&M, Landman (53) will read and attack the pulling blocker knocking him to the ground and making the quick tackle.

Vs Minnesota, here are a pair of physical tackles with one to the outside on the right and the other knifing into the backfield.

At California, he is able to slip the block of the center and make the quick tackle.

In coverage, he diagnoses pass vs run quickly and he possesses a solid understanding of his role in Zone coverage and will get solid depth in his drops. He plays with his eyes on the quarterback and stays in constant movement to try to get into his passing lanes and will get his hands up in an attempt to disrupt the play. He was occasionally used on Tampa 2 coverage in the deep middle of the field. In Man coverage, he was solid in the short area on solid tight ends and running backs. He was also used as a spy on third down with the options to rush. He showed solid timing on blitz and can get pressure with an open lane.

Vs Texas A&M, he will loop around the outside on the blitz to chase the QB out of the pocket but hustles back to the ball to make the tackle.

Vs Texas A&M, from the middle of the field he will read the QB, get into the passing lane and nearly make the interception.

Against inside Zone and Gap runs where he needs to react to the running back choosing a gap first he struggled due to adequate lateral agility to match the cut. When taking on blocks on these schemes, his pad level is high and is slow getting off the block. He was inconsistent reading the mesh point on read options often leaving him out of the play. On outside runs, he showed adequate spatial awareness to recognize blocks coming from the side and would get caught in traffic. His speed is just adequate to the outside and will overshoot gaps with quick diagnosing to try to make up for the lack of speed. He has marginal change of direction limiting his ability on cutbacks and in coverage. His movements were stiff in coverage and he lacks the speed to handle Man coverage consistently especially on the second and third levels.

At Arizona State, he has the running back wheel in coverage and gets hung up on the inside routes and can’t catch up to the RB who bailed him out by dropping the ball.

At Arizona State, he goes for the fake on this run instead of following the ball.

Landman is an old school linebacker who is best playing downhill and reading pulling offensive linemen. He attacks quickly, can slip blocks in front of him and takes good angles to the outside. He’s a strong tackler who will wrap up and limit yards after contact. He has a solid understanding of his role in Zone coverage and reads the quarterbacks eyes well. He his limited athletically when it comes to speed and change of direction and relies on his mental processing to make up for qualities he lacks. He will be a liability in coverage if he has to play every down.

He is one of those linebackers that were born in the wrong era. In previous times he would be that two down, run stopping linebacker on a good defense. In today’s NFL, he doesn’t have the speed teams need. He’s knowledgeable and processes well but his athletic limitations are going to keep curtail his potential in a league built on speed. Best case scenario, he could be an early down player but is more likely and back up who will struggle against the pass. I think there will be better options for the Steelers in this draft.

Games Watched: 2021 – Vs Texas A&M, Vs Minnesota, At Arizona State, vs USC, At California