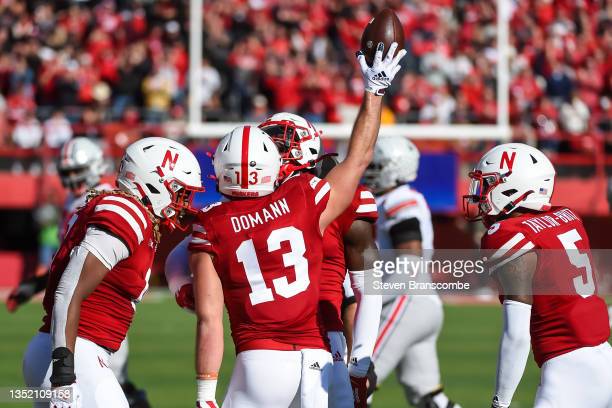 From now until the 2022 NFL Draft takes place, we hope to scout and create profiles for as many prospects as possible, examining their strengths, weaknesses, and what they can bring to an NFL franchise. These players could be potential top 10 picks, all the way down to Day 3 selections and priority undrafted free agents. Today, I’ll be profiling a linebacker prospect has a knack for making splash plays all over the field, yet carries a lengthy injury history with him to the league along with teams debating his best position fit.

— Closes ground quickly when playing as a run-and-chase defender
— Shows impressive tenacity and effort when in pursuit of the football
— Will throw his body into ballcarriers, chopping them down for big hits in open space
— More than comfortable playing in the slot as a nickel/dime backer in coverage
— Gets to his drops in zone coverage quickly, locating receivers crossing his space and keeps his eyes on the passer
— Has exceptional feel for zone coverage and can run with backs and tight ends in man coverage
— Can carry tight ends up the seam and will follow receivers on occasion in coverage from the slot
— Plays with a natural backpedal like a safety due to his DB background
— Sniffs out screen passes quickly near the LOS
— Has good ball skills for the position, having the hands and awareness to jump in front of passes for pass breakups and INTs
— Has a nose for the football when it comes to forcing the ball out or finding it on the ground
— Known as the emotional leader of the defense that leads both with his play as well as his communication

— Lack of size and length make it hard for him to disengage from blocks
— Will get engulfed by size when in the box as offensive linemen climb to the second level
— Was taken off the field at times on obvious run down situations
— More of a tweener build that is likely too small to be a full-time box defender but also not twitchy enough to be a full-time nickel/dime defender against slot receivers
— Will leave his feet often on open-field tackle attempts, leading to misses
— Lengthy injury history dating back to high school will likely plague his medical and turn several teams off entirely
— Is a sixth-year senior and will be 25 years old when the 2022 season starts

— Redshirt Senior prospect from Colorado Springs, CO
— Played running back, wide receiver, safety, and as a kicker/punter in HS, helping Pine Creek High School win two state titles
— Named to the Colorado academic all-state team in 2013, 2014 and 2015
— Came out as the #1 player in Colorado and a top-40 ranked Athlete recruit, named Colorado’s High School Gatorade Player of the year as a senior in 2015
— Saw action in every game, primarily on special teams coverage units as a true freshman and recorded eight total stops all on special teams while playing as a backup safety/linebacker
— Tore his ACL in spring practice in lead up to his sophomore year and ended up redshirting
— Was cleared for non-contact activities that November, but tore his ACL again in a pickup basketball game just days later, having surgery Nov. 6, 2017
— Saw action at both safety and outside linebacker in 2018, starting two games at outside linebacker in November and finished with 19 tackles (10 solo), one TFL, one sack, two forced fumbles, a fumble recovery, and two PBUs
— Made the full-time switch to outside linebacker as a junior, playing in 12 games and recorded 52 tackles (38 solo), 11 TFLs, 2.5 sacks, two forced fumbles, a fumble recovery, an INT, and six PBUs
— Started all eight games at outside linebacker in 2020 and recorded 58 tackles (35 solo), 6.5 tackles for loss, five pass breakups, two forced fumbles and one fumble recovery
— Exercised the COVID wavier to come back for a sixth year in Lincoln
— Played in the first 10 games of his final season before season-ending surgery forced him to miss the final two games and posted 72 tackles (44 solo) with 9.0 tackles for loss, 2.0 sacks, two forced fumbles, two interceptions and three pass breakups
— Injured a finger early in the Oct. 30 game against Purdue, costing him the rest of his final collegiate season
— Graduated with a degree in advertising and public relations while pursuing a career in broadcasting
—  Second-Team All-Big Ten and Second-Team All-American in 2021, Nebraska Defensive MVP in 2021, All-Big Ten Honorable Mention in 2020, 4-time member of the Nebraska Scholar-Athlete Honor Roll and Tom Osborne Citizenship Team

JoJo Domann was Mr. Everything during his time as a prep athlete, making waves on the gridiron in high school as a runner, receiver, run-and-chase tackler, coverage defender, and even as ace kicker and punter. The Colorado Gatorade Player of the Year decided to take his talents to Lincoln, Nebraska after yielding several offers from other Power Five schools, committing to play safety, but later converted over to outside linebacker.

When you plug in the tape on Domann, you can definitely see that versality and defensive back background show up in his play. The Cornhuskers listed him as a linebacker, but he primarily played many of his snaps detached from the LOS as an overhang defender or as a traditional nickel/dime backer in their scheme. He is smooth when asked to drop into coverage and maneuver in a backpedal, having a real feel for playing against the pass. Watch this pass breakup against Oklahoma where Domann drops back into the zone and reads #7 Spencer Rattler’s eyes, backpedaling nearly 20 yards to jump up and knock the pass down to his intended receiver.

He not only can run with backs and tight ends effectively in coverage, but he also has the instincts and ball skills to take the ball away. Watch this play against Ohio State where Domann picks up WR #11 Jaxon Smith-Njigba running the wheel route up the right sideline, staying with him stride-for-stride and breaks on the ball once thrown by #7 C.J. Stroud, leaping in-front of the pass, and tapping his toe on the green to get the INT on the highlight reel play.

Domann is an impressive athlete when it comes to his ability to click-and-close as a coverage defender and change direction, by flipping his hips when in a backpedal, or go from moving laterally to straight ahead. Here is a great example of Domann’s ability to react to what is happening in front of him on this pass to #32 TreVeyon Henderson in the flat, coming downhill after making his zone drop to close space. Domann does slip on the play but manages to get up almost instantly to wrap up Henderson in the backfield for the TFL.

Another key attribute that sticks out of Domann’s game is his effort in pursuit of the ball. The guy plays with his hair on fire at times both as a run defender as well as a pass rusher. Watch this play where Domann is aligned on the right side of the formation over the slot receiver and comes on the blitz on the snap of the ball. He closes ground on the back after the zone read, chasing him down from behind for minimal gain, making a play eerily like that of former Steelers and current Bengals DB Mike Hilton.

Here is a similar example of Domann coming on the blitz off the edge, this time as a pass rusher against Northwestern. He waits for the QB to turn his eyes away and then hits the jets, accelerating into the backfield and levels the passer into the turf for the sack.

When Domann plays chase to the ball, he gives complete effort. While he doesn’t manage to get the sack on this play, watch the ground Domann covers when he recognizes the double pass back to Rattler against the Sooners, closing ground on the QB in a hurry to pressure him as the releases the football, forcing the pass to fall a little short and for the receiver to stop his route, giving the defense to catch up and prevent the long TD.

While Domann is exceptional playing in space at the college level, there are several areas where that need to be addressed as he transitions to the league. He likes to leave his feet as a tackler routinely, causing him to lose leverage and base as a tackler which results in open-field misses. Here is one example where Domann avoids the block, but comes in hot, not breaking down and leaves his feet attempting to make the tackle as the receiver evades him to get additional yardage.

Another big problem with Domann’s game is his lack of size and ability to effectively stack and shed blocks against the run. Nebraska often deployed Domann detached from the LOS to utilize his range and pursuit, but also to prevent blockers from climbing to the second level and engulf him with sheer power and size. Watch here in the Senior Bowl game where #72 Abraham Lucas climbs to pick up Domann at the second level, running him backward until Domann works off the block to catch the runner just short of the goal line. It’s a good play by Domann in pursuit, but his lack of size and play strength will be a liability if asked to play as a traditional inside linebacker.

When I watch Domann, I see a player that has a multitude of skills, but also lacks in key physical areas that make his NFL projection tricky. He represents himself well in coverage, but the question remains whether he can consistently hold up as a nickel corner/strong safety type in the slot or as an overhang defender against NFL-caliber slot receivers. His size and lack of play strength at the point of attack also concern me about his prospects as an off-ball linebacker, likely being an asset when freed up to play chase but will struggle mightily against run-heavy offenses that implement power and come straight at him.

When watching Domann play, my mind when to other linebacker/safety hybrids and current Steelers S Miles Killebrew came to mind as good comparison due to the similar size profile, athletic traits, and ability to play in coverage at their size, as well as the tenacity both play with playing chase of the football. Killebrew came into the league as a safety but dabbled a little at both DB and LB and has found a home as a core special teamer and depth player. Domann has experienced the same position fluidity at Nebraska and will likely see a similar trend in the pros, likely having to cut his teeth as a special teams ace while proving to defensive coordinators he can have a role on defense.

Domann’s best projection to the league would be either as a WILL backer or a LB/S hybrid that can play in the box or detached from the LOS in the slot due to his prowess in coverage and lack of ideal size to shed blocks. In the case of Pittsburgh, the Steelers likely wouldn’t target Domann as a traditional off-ball linebacker in their system, but a player that could replace Killebrew or Marcus Allen’s role on the team on defense and special teams. Figuratively, Domann could potentially fit in that nickel role once occupied by Mike Hilton, but that transition could be tough in the league. Due to his injury history and lack of ideal fit, Domann could see himself go somewhere on Day Three.