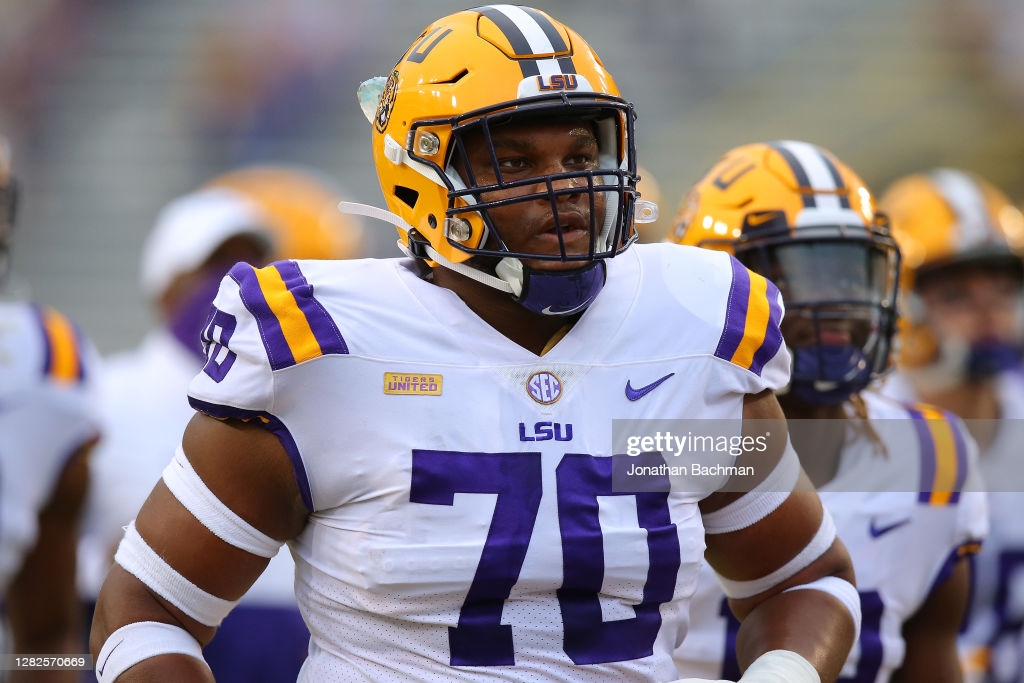 From now until the 2022 NFL Draft takes place, we hope to scout and create profiles for as many prospects as possible, examining their strengths, weaknesses, and what they can bring to an NFL franchise. These players could be potential top 10 picks, all the way down to Day 3 selections and priority undrafted free agents. Today, I’ll be profiling an offensive guard prospect that brings a ton of experience to the table as a potential plug-and-play option on the interior to the 2022 NFL Draft but has a background that needs to be checked out.

— Possesses good size on a well-built frame for the guard position
— Has functional athleticism when working to the second level or when asked to move laterally in pass protection
— Strong run blocker at the point of attack, having the ability to displace defenders off the LOS— Plays with an edge as a blocker, looking to finish his competition to the ground
— Effective when asked to square pull across the line or full pull out in space
— Has the awareness and recognition in pass protection to pick up stunts and blitzes
— Possesses a strong lower body to sit in and anchor against the pass rush
— Has the movement skills to play in a zone-based scheme as well as the play strength to play in a power/gap scheme
— Took snaps at center during Senior Bowl practices and held his own

— Occasionally pauses his feet in pass protection, resulting in him lunging forward and dropping his head on blocks
— Needs to be more consistent in syncing up his hands and feet in pass protection
— Mainly a guard-only prospect with little position versatility shown on college tape
— Legal issues stemming from 2018 case raise questions about character off the field

— Redshirt Senior prospect from DeSoto, TX
— Rated as a 4-star prospect by 247Sports, Rivals, and Scout
— Played in the prestigious 2017 Under Armour All-American Game
— Saw action in all 13 games, starting the final 12 contests of the season as a true freshman in 2017
— Was suspended after an arrest in Dallas for alleged aggravated sexual assault on Aug. 2, 2018, causing him to miss the entire 2018 season
— Ingram was subpoenaed to appear in court for trial at 9 a.m. on Sept. 16 in which case the charges were dismissed, and he was reinstated to the LSU program in the fall of 2019
— Played in 12 games with two starts at LG as a redshirt sophomore after sitting out the entire 2018 season
— Played in nine games with nine starts, missed the Missouri game with an injury
— Played and started 11 games, all at left guard as a senior
— Four-year starter on the offensive line for the Tigers; appeared in 45 games, starting 34 times at left guard (22) and right guard (12)
— 2021 Second-Team All-SEC
— 2021 LSU graduate in May of 2021 with a degree in Sports Administration

Ed Ingram arrived in Baton Rouge as one of the top offensive guard recruits in the nation from Texas in 2017 and has since become a fixture for the Tigers offensive line during his tenure in Death Valley. The redshirt senior has played in 45 games with 34 starts in his college career, getting experience at both guard spots in the SEC. When watching Ingram, you see a powerful, aggressive run blocker with the strength and punch to move defenders off their spot to clear big running lanes. On this play against Florida, Ingram takes the defensive tackle and walks him backward while turning his shoulders to create a big hole the runner explodes through for a chuck play on the ground.

Ingram also is great when asked to get out in front as a puller on counter runs in a power-based scheme. Watch here in the same game where he pulls from the LG spot to kick out the stand-up edge defender, completely de-cleating him as the runner sees daylight up the middle and scores the walk-in TD.

Here is another example of Ingram as a puller against the Crimson Tide, picking up #31 Will Anderson at LE and makes contact with him at the LOS while turning and steering him inside to free up the runner to run off his back hip. His hands latch onto the defender’s frame, and he runs his feet to take him clear out of the play. Anderson is widely recognized as the best defender in college football and Ingram handles him with ease on this rep, although the play itself isn’t successful with the rest of the defense rallying to the football.

Ingram is also effective out on the move whether if he is asked to climb to the second level or get out in front of a screen pass. A perfect example of the latter here against Vanderbilt where Ingram get in front of the receiver catching the screen pass and chucks the defender to the floor, clearing the way for his teammate to get into the end zone.

When it comes to pass protection, Ingram’s play remains steady as he excels at neutralizing the pass rush. Ingram led the SEC in Pass Blocking Grade in 2021 (82.6) via Pro Football Focus due to his ability to keep the passer clean. His aggressiveness as a run blocker can come out in pass protection as well as we see in this clip where Ingram pile drives a defender attempting to tip the pass at the LOS.

He has quick feet that can mirror rushers from side-to-side as well as has the grip strength to lock onto a defender’s torso and completely neutralize the rush. We see a good example of both here in a rep at Senior Bowl practices where Ingram lines up at center and gets the best of Alabama’s Phildarian Mathis, latching onto his chest and syncing up his hands and feet to win the rep. Ingram was named American Team O-Lineman of the week for his play during practices due to his consistent play in pass protection.

Ingram also is a very aware pass protector, recognizing twists and stunts and having the wherewithal to adjust to pick up the blitz. Here against Texas A&M, we see Ingram pass off the left-side A-gap defender to the center to pick up the other defensive lineman looping around, keeping to pocket clean as the QB locates the receiver over the middle for the completion.

On bad habit Ingram tends to show on tape is his overaggressive style at times to play with his shoulders over his center of gravity, lunging forward on his blocks without having his feet follow. This leads to whiffed blocks like we see from this example against the Gators where Ingram whiffs badly and eats it on the turf as the QB chucks it up into the end zone where the receiver manages to catch it over the shoulder for the score.

The same occurs occasionally in pass protection where Ingram ducks his head and stalls his feet, allowing rushers to get around his outside shoulder on the rush and hunt down the QB like this sack by Oklahoma’s Perrion Winfrey in the Senior Bowl game. Ingram’s feet stall as Winfrey knocks his hands down, getting around him quickly for the blindside hit on QB Baily Zappe.

When watching Ingram play, I see an athletic guard prospect that can excel in multiple running schemes in the league as well as provides steady pass protection with a good base and anchor when he doesn’t allow his feet to stall and limits his tendency to lunge forward. From a pro comparison standpoint, an easy name to point to is another former LSU Tiger and current Pittsburgh Steeler prior to free agency Trai Turner. This is comparing Ingram to Turner coming out of college, who shared nearly identical measurables as well as impressive athleticism (4.84 40) who made some big plays on the move for the Carolina Panthers back in his early years in the league.

Turner ended up going in the third round of the 2014 NFL Draft, and I could see Ingram going in a similar range this spring. As a blocker, there are very few holes in his game and has the experience at both guard spots to come in and contend for a starting gig early in his NFL career, being a fit in nearly any blocking scheme. However, there are some tendencies that he needs to clean up going forward, as well as the previous legal issue on his ledger that he will have to vet with NFL teams at the Combine to prove those issues are a thing of the past.

Should his character check out, Ingram figures to be a potential value pick somewhere on Day Tow or even really Day Three of the draft that can make an immediate impact for the team that selects him. Should Pittsburgh decide not to re-sign Turner this offseason, they could turn to his alma mater for his potential replacement that could fill in at guard sooner rather than later as a starter in the league.