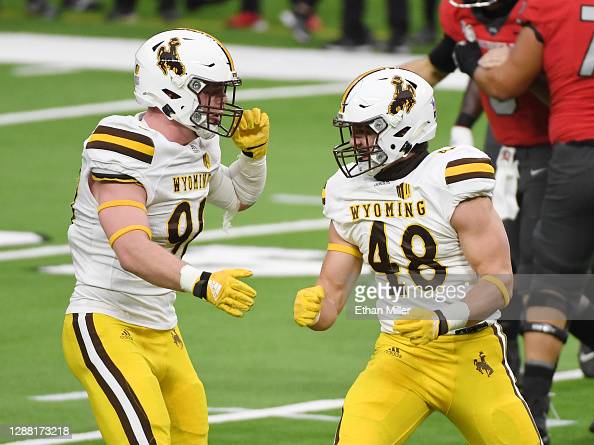 From now until the 2022 NFL Draft takes place, we hope to scout and create profiles for as many prospects as possible, examining their strengths, weaknesses, and what they can bring to an NFL franchise. These players could be potential top 10 picks, all the way down to Day 3 selections and priority undrafted free agents. Today, I’ll be profiling Wyoming LB Chad Muma.

— Well-built frame and looks the part, appears to have length and enough size
— Well-rounded skillset with no significant weaknesses in his game
— Plays run well, sifts through trash, stays clean and finds the football
— Willing and able to take on blocks, easily discards TEs in run game and able to hold ground against offensive linemen, shows hand use and ability to stay clean
— Reliable tackler when taking proper angle to ball, drives feet and finishes play
— Functional athlete, can run with running backs in man coverage and able to get depth in middle/hook zones
— Experience rushing the QB
— Good effort and runs hard to the football
— Special teams experience and value
— Highly productive senior season

— Lacking standout, ‘A’ quality trait, not biggest/strongest/fastest
— Occasional inconsistency with angles, can be too sharp and cause him to miss coming downhill or only provide low arm tackle in hopes of tripping up runner
— Will see him misdiagnosis and put himself out of position in run game
— Technical player but not fluid isn’t an easy mover when flowing laterally, looks a bit robotic flowing down the line
— Not a natural pass rusher off the edge who won off of scheme but shows ability to beat RBs one on one up the middle
— Did not play against elite competition
— Average starting experience

— Three-year starter for Cowboys (21 total starts), played only six games in 2020 due to COVID-shortened season
— Career: 266 tackles (19 TFL) 5.5 sacks, 3 INTs, 2 TDs (INTs/TDs all came in 2021)
— 2021: 142 tackles in 13 games (8 TFL) 1.5 sacks 3 INTs, 2 TDs, also recorded a blocked kick
— Played MIKE/SAM linebacker in tape watched
— Played DB through junior year at high school, switched to LB senior season, added 100 pounds throughout football career
— Mechanical engineer major, received offer from Columbia, teammates called him “Computer” for unwavering demeanor
— Two-star recruit out of high school
— Teammates praise his work ethic, one teammate said he had second-best effort ever seen only behind Logan Wilson, plays hard in practice and went through five chinstraps beginning of one year because of his power
— Father played football (safety) for Wyoming in early 90s
— Diabetic, checks blood pressure between quarters but says he’s had a handle on it since high school

Wyoming linebacker Chad Muma is my first 2022 NFL Draft player profile of the year. An intriguing senior at a position of potential and really, likely, need, Muma had a highly productive senior season. On tape, Muma is a well-rounded player with no obvious or significant weakness in the run or pass game. What I really like on his tape is his vision and ability to stay clean in the run game. He’s able to sift through the trash, find the ball, and make the tackle, and he made a lot of them this season. Some examples.

He’s able to fill against the run and plays with an overall physical, downhill nature, not at an elite level but at a very good one. He’s especially able to shed tight ends who climb to him in the run game while being able to hold the point of attack against offensive linemen, especially on combo blocks. Defeats the block of #70 in the first clip, gets off #3 in the second clip, and the tight end in the third clip.

On the negative side, he’s far from a bad athlete but he’s not an easy, fluid-mover. He’s a technical mover, if that makes sense who lacks elite foot speed but can run with slower running backs in man coverage and get depth in zone. While he is a reliable tackler when showing good form and the proper angle, he did sometimes take too sharp of an angle running downhill, perhaps showing a little bit of tightness in his change-of-direction and his lack of great athleticism.

Everything I’ve read on Muma the person has been glowing. Salt of the earth, a third-generation Cowboys. Incredibly smart, as evident by his mechanical engineer and offer from Columbia. A hard-worker, great player in practice, and someone who is clearly maximizing every ounce of his ability.

Muma is a lot of the things the Steelers are looking for, trying to thread that needle as a do-it-all linebacker. The challenge in Pittsburgh’s scheme is they ask so much of those guys. It starts with run defense and Pittsburgh needs a bully against the run. Muma isn’t quite to that level but his run defense is good and he’s a technical player and able to stay clean in the run game, something the Steelers’ linebackers weren’t good at this season.

From a comparison standpoint, he’ll receive plenty to Wyoming alum Logan Wilson, who excelled at the Senior Bowl a few years ago. Wilson is the better athlete and prospect than Muma. My NFL comp for Muma is the Packers/Giants Blake Martinez, a durable, tackling machine but never someone who was a marquee NFL off-ball linebacker. Muma, like Martinez, is a high IQ player (Martinez attended Stanford and had a 3.8 GPA as an engineering major).

Muma is a solid linebacker to play the MIKE or SAM spot at the next level. But I’m not jumping on the table for him to be the answer the Steelers are looking for.