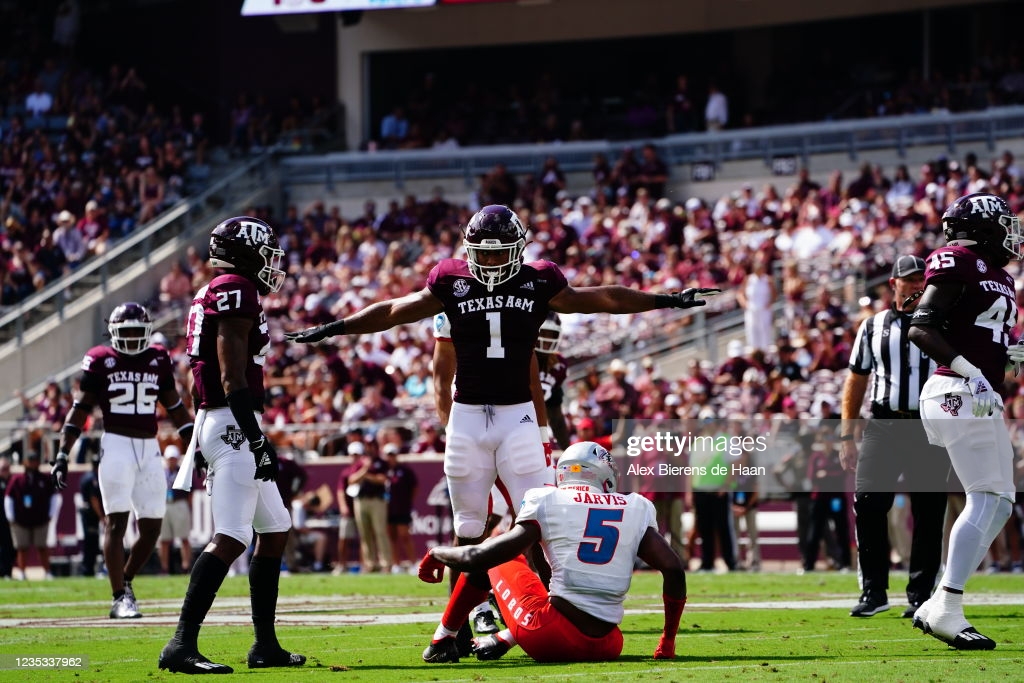 From now until the 2022 NFL Draft takes place, we hope to scout and create profiles for as many prospects as possible, examining their strengths, weaknesses, and what they can bring to an NFL franchise. These players could be potential top 10 picks, all the way down to Day 3 selections and priority undrafted free agents. Today I’ll be profiling a linebacker who began his collegiate career on the other side of the ball.

The combination of size and speed was an element missing from the linebacker group this year and Hansford is another player who fills those requirements. He aligned primarily to the strong side in the Aggies 4-2-5 alignment and earned an invitation to the Senior Bowl.

As a run defender, he displays good acceleration to get downhill quickly and is willing to fill gaps and take on blockers aggressively. He is solid scraping down the line and working through traffic and shows good speed to the outside. Reading the mesh point, he plays with eyes in the backfield and can find gaps within the line to get to the ball. Against blockers, he has solid use of hands and pad level when taking on blockers coming out to the second level along with good play strength to withstand and agility to avoid offensive linemen. He is a strong tackler within the tackles and near the line of scrimmage. On goal line situations he was used on the edge and showed sold play strength setting the edge and quickness and bend from the backside.

Vs Alabama, Hansford (1) starts to head into the wrong gap but corrects and makes a tackle behind the line of scrimmage.

At Missouri, he will scrape to his left, used good play strength and hand placement taking on the blocker and will get off to make the tackle near the line of scrimmage.

Vs Auburn, he works his way through traffic and a possible hold to make the tackle.

Against the pass, in Zone coverage he gets solid depth and has solid awareness of receivers going through his area. The athleticism is apparent and he has solid change of direction and good acceleration to the ball. While playing Man coverage, he was tasked with covering running back and tight ends and has the speed to carry them on deeper routes and length and agility to be disruptive in the short/intermediate areas. He was consistent trying to get his hands into passing lanes and has solid ball skills. Against screen plays as the overhang player he uses his speed and good hand placement to aggressively take on blockers on the outside.

At Missouri, he is on the far hash and will pick up the number two receiver coming from the top. He accelerates downhill and gets the pass break up.

Vs Auburn, lined up in the near slot he’ll work through the rub routes to the flat route and put a good hit on the receiver

Hansford’s mental processing is improving but he will commit too soon to the wrong gap. Improvement is needed on his angles to the outside and needs to stay inside the runner. When the plays moved downfield he doesn’t seem to be chasing at full speed. He’s tackling is inconsistent the farther the play gets from the line of scrimmage and doesn’t always wrap up. I was hoping to see more aggressiveness in his play overall. In Zone pass coverage, he needs to be more active moving with the quarterback’s eyes. When playing Man coverage, he looked unsure of who to cover when routes were crossing over each other. Though he rushed from the edge he didn’t have success there lacking a plan and just winging it. He did not aggressively take on running backs in pass protection.

Vs Arkansas, he is over the slot receiver and the coverage looks like Man. He changes directions three or four times covering no one and then after hustling downfield makes a poor effort to make the tackle.

Vs Alabama, he will scrape to his left to the correct gap but gets to wide allowing the running back to cut behind him for a big gain.

At Ole Miss, he plays the run first and the pass is thrown behind him. He turns and makes a weak effort to punch the ball out rather than make a tackle. Not the lack of physicality you want to see.

Overall, Hansford has good athleticism and size and fills gaps well. He plays with eyes on the ball and can find his way through traffic. The speed is there to chase down players to the sideline as well as cover tight ends and running backs. I like the potential to be an effective blitzer and he is strong tackler near the line of scrimmage. Improvement is need in choosing the right gaps, his angles to the outside and technique in Zone coverage.

The Steelers will look to improve and add to the linebacker group. Hansford needs some seasoning to be an effective inside linebacker but has the potential to be a three down linebacker. The athleticism is there to play the WILL linebacker in an even front and let him chase and make tackles. For Pittsburgh, he would definitely add speed to the group and could be a strong special team player initially while honing his skills as a future BUCK linebacker. Demario Davis is a good comparison based on size and length.

Games Watched: 2021 vs Arkansas, Vs Alabama, At Missouri, Vs Auburn, At Mississippi