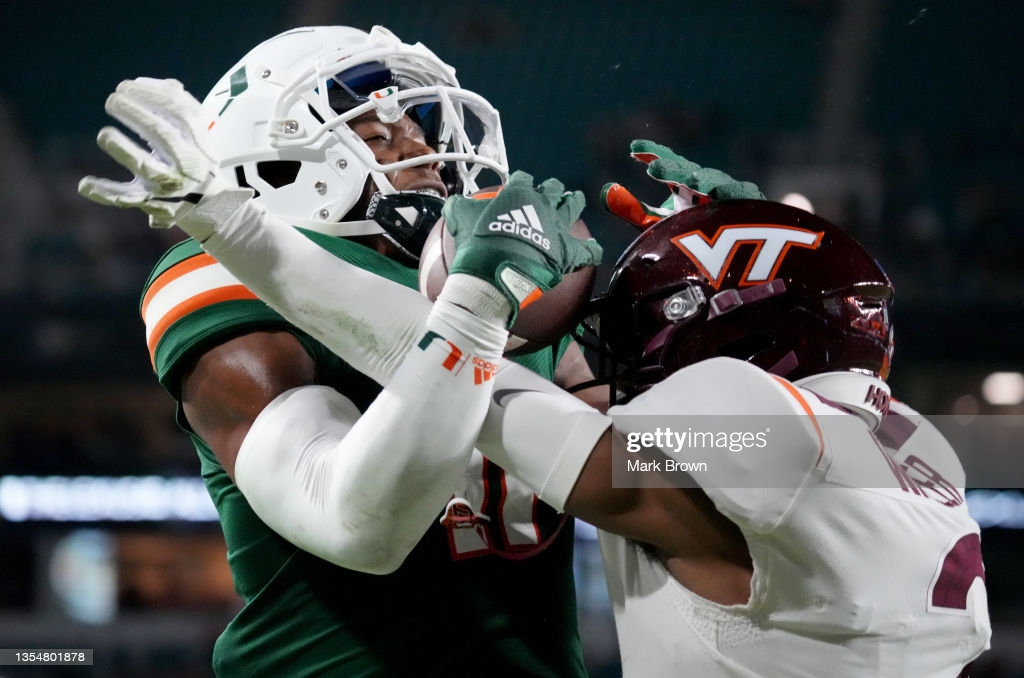 From now until the 2022 NFL Draft takes place, we hope to scout and create profiles for as many prospects as possible, examining their strengths, weaknesses, and what they can bring to an NFL franchise. These players could be potential top 10 picks, all the way down to Day 3 selections and priority undrafted free agents. Today, I’ll be profiling a wide receiver prospect that had his ups-and-downs with the Sooners but remade himself as a more well-rounded prospect in his lone season in South Beach.

— Has decent height and length for the receiver position
— Has more rolling speed as a long strider that can open up downfield when he gets rolling
— Does a great job creating separation out his routes over the middle of the field and can get on top of coverage as a vertical threat
— Sneaky elusive after the catch by often make the first defender miss in space
— Route tree expanded in final season in Miami, being utilized in all quadrants of the field
— Has been used on quick hitters and WR screens
— Does a good job getting inside separation on slants and deep over routes by eating the cushion and getting on the toes of the defender before going into his break
— Was more consistent catch the football this season, holding onto the ball when taking hits over the middle
— Has great play demeanor with the competitive toughness to win one-on-one scenarios
— Lauded for his humility as a football player and the desire to continue improving at his craft
— Wins fairly consistently down the field and tracks the ball well over the shoulder on deep passes
— Can win on inside and outside releases when working vertically
— Has a feel for finding the soft spots in zone coverages and will sit down to provide his QB a target

— Plays with a thin frame and isn’t overly dynamic or twitchy
— Doesn’t seem possess great long speed down the field and can get caught from behind
— Had a history of dropping the football at Oklahoma that has since improved, but still can use some work as he likes to body catch
— Needs to be more deliberate at coming back to the football on curl/comeback routes
— Has a ball security issue where defenders can jar the ball loose resulting in incompletions or fumbles due to his thin frame
— Can be a willing blocker, but doesn’t provide much in run game support or in the screen game in terms of getting a body on a defender
— Needs more functional play strength to win more combative catch situations as well as contribute more as a blocker on the outside
— Primarily lined up on the right-side boundary in 2021 without much usage anywhere else

— Redshirt Junior prospect from Cedar Hill, TX
— Recognized as a four-star recruit by ESPN, Rivals and Scout
— Named to 2016 AP Class 6A All-State Second Team after catching 87 passes for 1,590 yards and 25 touchdowns
— Was used sparingly as a true freshman at Oklahoma who totaled eight receptions for 125 yards (15.6 YPR) and a score in five games played
— Started all 14 games as a sophomore, totaling 43 receptions, 743 receiving yards (17.3 YPR) and five receiving touchdowns along with three kick returns for 71 yards (23.7 YPR) and three special teams tackles
— Started all 10 games in which he played in 2020 and caught 25 passes for 312 yards (12.5 YPR) and three TDs along with ten kickoff returns for 255 yards (25.5 YPR) and a single punt return attempt
— Chose to enter the transfer portal and enroll at Miami after role on offense decreased his junior season
— Set the Miami single-season receptions record in his lone season with the Hurricanes, hauling in 79 receptions for 1,172 yards (14.8 YPR) and seven touchdowns
— Second team All-ACC in 2021

Charleston Rambo spent the first three seasons of his college career at Oklahoma where there were flashes of NFL-caliber play, but he was plagued by inconsistency and his role in the offense went backwards as a junior. Rambo transferred to Miami for the 2021 season and remade himself as a draft prospect, becoming more of a well-rounded wide receiver rather than primarily a deep threat. Rambo became more nuanced as a route runner in 2021, being more intentional at attacking the cushion by defensive backs and coming out of his route clean like we see on this curl against Michigan State where he breaks back to the football and gets up field for some YAC.

While Rambo primarily lined up on the right-side boundary in the Hurricane offense, we got to see him diversify his route tree from his days in Norman, working all quadrants of the field. Here in the same game, we watch Rambo go over the middle and find the soft spot in the zone to get the chains to a third-and-short situation.

While he diversified his skill set as a route runner, Rambo still was utilized on other “gadget” plays like WR screens and quick hitters. Here is an example of Rambo running the tunnel screen much like Pittsburgh likes to run, getting to the sideline and picking up the first down.

While Rambo primarily ran on the right side, he had some exposure to the left as well like on this catch and run against the Panthers. Watch Rambo catch the ball in the middle of the field and then run in open space, evading one tackle and gets brought down inside the five.

As you can see in the clip above, Rambo doesn’t have that second gear in the open field once the ball is in his hands. He has fairly good burst, but the long speed isn’t there compared to other burners in the league. Here is another example of Rambo being chased down from behind, ultimately having the ball knocked out of his hands that the defense recovers. Being 180lb, Rambo’s frame is pretty frail and can be susceptible to coughing up the ball like we see on this long catch and run.

Rambo is competitive at the catch point, but his size will make it difficult to win in close quarters with physical defensive backs at the next level who force him to play through contact. The defender may arrive a little early here on this play, but Rambo struggles to bring the ball in when attempting to catch the ball with his body, having the pass fall incomplete.

While saying this, Rambo has shown flashes of making the tough grabs through contact compared to hearing footsteps as a receiver earlier in his college career. Shortly after that previous drop, we see Rambo haul in a touchdown in the end zone while getting sandwiched in-between two defenders which included an unnecessary roughness penalty by the safety leading with his head.

Here’s another example in the Pittsburgh game where Rambo gets a step of separation on the slant pattern, catching the pass an immediately gets decked by the CB from behind, but manages to hang onto the football.

Rambo’s ball tracking ability down the field aids in his ability to win on vertical patterns but also when making contested catches near the red zone. Here against NC State, watch as Rambo tracks the ball in the air while blanketed in coverage, hauling in the pass in the end zone for the score on the fade route as he plays through the defender in tight coverage.

His focus on the catch has drastically improved since last season, and you see his attention to detail when getting on the defender’s toes in coverage before coming out of his break. Both occur on this second TD of the game against the Wolfpack where Rambo gets right on top of the corner and breaks inside, gaining separation for the QB to hum it in there and Rambo to make the catch with arms outstretched.

While he may not run a 4.3 40, Rambo has the still set to win vertically down the field thanks to his competitiveness and understanding of how to generate separation as mentioned earlier. Here we watch Rambo win on the skinny post, getting behind the defense after effectively breaking inside and reels in the long bomb that he takes deep into Wolfpack territory.

Members of the Steelers Depot crew got to see Rambo’s ability to win vertically this past week at the Shrine Bowl where he likely made the most impressive catch of the week, effectively stacking the outside corner and dives forward to reach out and bring in the deep pass for the touchdown with the corner and safety trailing behind.

All this being said, the upside is limited for Rambo based on his athletic profile. He isn’t physically imposing, and his frame will limit his effectiveness as not only a receiver as mentioned earlier, but also his ability to contribute as a blocker. Here is one example where Rambo initially shows intent to block but gives the defender a little shove and lets him get off the block as he attempts to make the tackle.

Rambo also needs to be more consistent in working his way back to the football on his routes. He has showed improvement in this area compared to his days at Oklahoma, but improvement needs to be made on a play-to-play basis. A perfect example here against the Spartans where Rambo breaks out of his route looking for the football but sits in his spot and allows the defender to work back to the ball, jumping the pass and picking it off at the end of the game to seal the victory. QB D’Eriq King may have been late on his delivery, but Rambo must be more mindful to prevent the defender from stepping in front of him.

Overall, Rambo is a player that I had my eye on since his sophomore season in Norman and have wonder whether he would develop into an NFL-caliber wide receiver prospect based on the flashes you saw on tape. Rambo has done that with his play in South Beach this season as well as his maturation process as a young man, being a player of high character that constantly stays humble and is committed to improving his game every day.

Rambo is coming off an impressive week of practices at the Shrine Bowl, and hopefully will get the opportunity to showcase his athleticism and improved technique at the NFL Combine later in March. As far as pro comparisons go, fellow former Oklahoma Sooner Dede Westbrook came to mind as another thin deep threat that played in a similar system and showcased the ability to win down the field as well as the ability to create a little after the catch. The two have nearly identical measurables, although Westbrook likely is a tad faster in terms of straight-line speed.

The team that drafts Rambo will likely be getting someone who will start out his career as a depth player that can play outside but might dabble a little bit in the slot as well. Should he be able to return kicks or contribute on special teams, he could get a helmet early on in his rookie season. Expect Rambo to carve out a role as a good #3-4 option in a receiver core that can be a spot starter or good backup with the chance to carve out more of a role for himself with continual improved consistency.