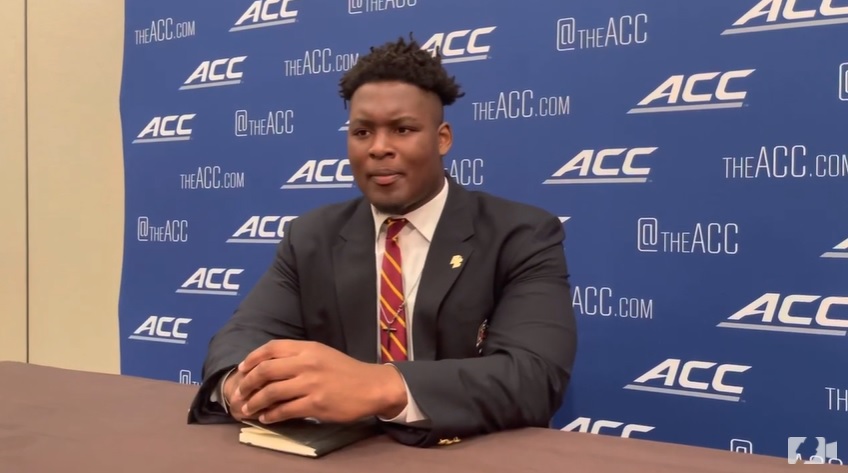 From now until the 2022 NFL Draft takes place, we hope to scout and create profiles for as many prospects as possible, examining their strengths, weaknesses, and what they can bring to an NFL franchise. These players could be potential top 10 picks, all the way down to Day 3 selections and priority undrafted free agents. Today, I’ll be profiling Boston College OG Zion Johnson.

— Thickly built, large calves and certainly looks the part, impressive length relative to height
— Physical run blocker, best in a man scheme on base and down blocks, throws his weight around and creates consistent push in run game steering and moving defenders out of the game
— Good burst and quick off the line of scrimmage, torquey with heavy hands, able to unlock hips and create power on contact when he shows a consistent base
— Able to reach and cutoff on the backside of runs
— Capable of sliding and sealing the edge when playing offensive tackle, functional athlete whose punch is able to stun pass rushers
— Strong base and able to stall out bull rushes
— Plays with an edge and looks to finish blocks, runs his feet
— Fairly coordinated and stays on his feet, good balance
— Versatile, experience at tackle and guard
— Fair amount of D-1 starting experience and regarded as a leader on his team

— Inconsistent in pass pro and home is likely at guard
— Good feet but will stop when beat, tendency to lunge and lean
— Drops eyes too often and has more trouble with speed and finesse rushes, top-heavy and can double-over
— Needs to show more consistency in identifying and picking up stunts, misses too often and occasionally screws up assignments
— Willing to throw his body around but can be more aggressive in pass protection when uncovered to find work and help out
— Shows a stiff, high/upright stance, especially when playing guard, appeared to be less of an issue at tackle

— Three-year starter for the Golden Eagles (30+ career starts)
— 22 years old, turns 23 in November
— Started seven games at LG in 2019, 11 at LT in 2020, played both in 2021
— First-team AP All-American and All-ACC in 2021
— Named team captain in 2020 (believe BC moved to per-game captain system in 2021)
— Spent two years at Davidson (who ran triple-option offense), making 19 starts before transferring to Boston College
— Didn’t begin playing football until senior year of high school, zero-star recruit out of high school
— Played golf in high school from eighth grade until junior season before joining football team

Zion Johnson is a name I’ve had in my head for awhile now, even though I’m (currently) pretty green with the 2022 NFL Draft class. A road-grading guard is Johnson’s game and something the Steelers are looking for. To Johnson’s tape, he’s a thickly-built offensive lineman who gets after it in the run game. Best traits are his strength and ability to drive and steer defenders on base and downblocks.

One of the first clips I watched came against Pitt earlier this year. Johnson the left guard displaces the defensive tackle and to create the lane for the back to run through. Johnson is a lane creator in the run game.

He shows good leg drive and finish in the run game with some nastiness in his game. Good attitude for an offensive lineman who wants to mix things up and put guys on the ground, both in the run and pass game.

In pass pro, his size and strength allows him to anchor and rebuff bull rushes. Those are tough to stop and the goal against those isn’t to make it look pretty but to make it work but Johnson does both pretty well. He’s a tough guy to push around with a big lower half and strong anchor.

His versatility is also a plus. Though he’s short at a listed 6’3″, he reportedly has 34-inch arms, giving him NFL tackle length. It helps him to seal the edge in pass protection. Overall though, he is a better run-blocker than pass protector. He can give up the edge against more athletic edge rushers with good hand use. More critically, he tends to lean and not slide his feet as he tries to mirror and match in pass pro. It causes him to lean and lunge and whiff on blocks.

I’m no stance expert and it’s important to note there is no “correct” stance. It’s usually based off a players comfort level, what works and feels best for him. But I noticed his stance at guard is stiff and tall, not showing much knee and hip bend. Still, it doesn’t seem to impact him too much firing off the ball. And he did show more bend at tackle, for what it’s worth. 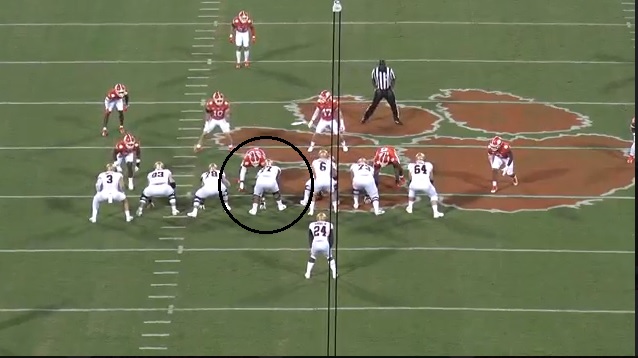 He’ll also have to work on his stunt pickup and recognition. That’s caused him problems when he’s been forced to process or work uncovered and find work, or wait for work to find him with loopers and crashers.

Overall, Johnson is a plus run blocker who should do well in a man-blocking scheme. But he has enough athleticism to play in zone schemes too. His pass protection isn’t ideal but it’s fixable with improvements to his technique. Important to remember the guy got a late start to his football career and his best is ahead of him.

My comparison ranges between Laken Tomlinson and Trai Turner (more of the Pro Bowl type of Trai Turner as opposed to the Steelers’ 2021 version). A very good prospect the Steelers need to consider.