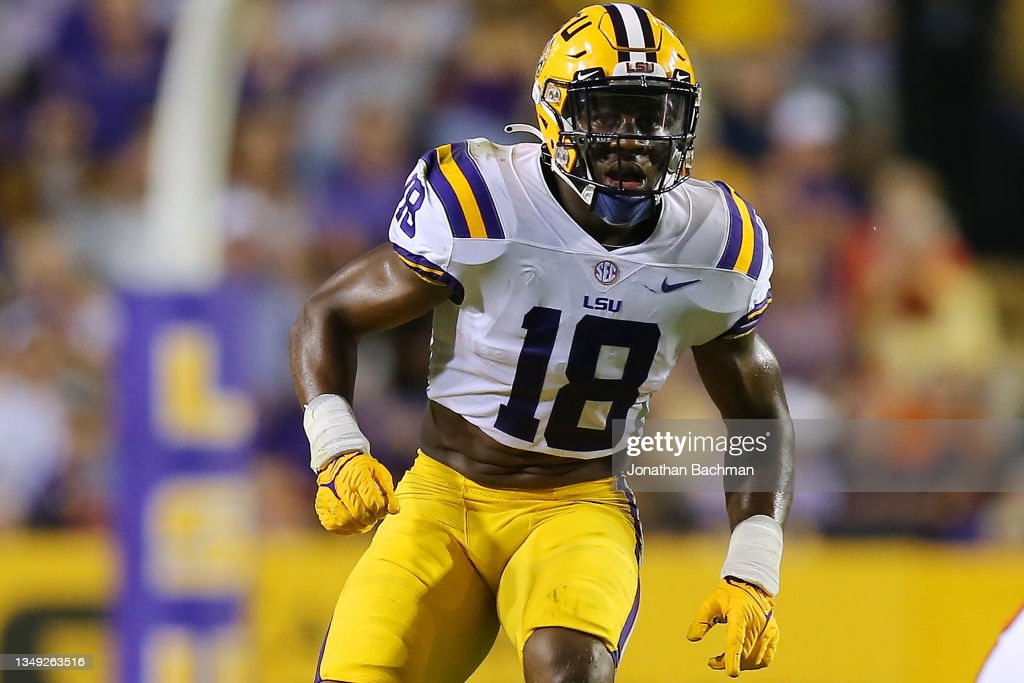 From now until the 2022 NFL Draft takes place, we hope to scout and create profiles for as many prospects as possible, examining their strengths, weaknesses, and what they can bring to an NFL franchise. These players could be potential top 10 picks, all the way down to Day 3 selections and priority undrafted free agents. Today, I’ll be profiling a linebacker prospect who took college football by storm this season, combining vocal leadership and impressive athleticism into a tantalizing option Pittsburgh may consider early in the 2022 NFL Draft .

— Fantastic size and length for the position
— Has the closing speed and burst you desire in a run-and-chase linebacker
— Plays with an aggressive demeanor paired with the explosiveness to pursue the football the football as a run defender as well as a pass rusher
— Does a great job working downhill and filling gaps in the box
—Takes good angles of pursuit to the football, closing the distance between he and the ballcarrier quickly
— Has experience playing on the edge, being capable to set the edge against the run
— Length and size aid in his ability to stack and shed to get off blocks
— Does a good job changing direction and working laterally down the LOS
— Has the twitch and quickness to adjust in short areas to make plays on the football when not in ideal position
— Has shown to be an effective pass rusher off the edge as well as from the box
— Has the backpedal and movement skills to be an effective zone dropper in coverage
— Possesses the athleticism and length to matchup up with tight ends on vertical concepts as well as running backs coming out of the backfield

— Can be a tad slow to diagnose the play at times as his eyes can get stuck in the backfield
— His eyes can get him in trouble on misdirection plays where he bites on the first thing he sees
— Can over pursue the ballcarrier at times, causing him to be out of position
— Will allow blockers into his chest when stacking against the run, causing inconsistencies at his ability to shed blocks
— Can struggle staying in position with receivers in man coverage, needing to limit separation and YAC
— Can be quicker to react to the ball being thrown when in zone coverage to have a chance at impacting the pass
— Needs to use his arms more as a pass rusher to disengage blocks

— Senior prospect from Baton Rouge, LA
— Originally from New Orleans, his family relocated to Baton Rouge when he was five years old due to Hurricane Katrina
— Rated as a four-star prospect by 247Sports and Rivals, participated in the Army All-American Bowl Game
— Played in 12 games with no starts, recording one tackle playing mainly special teams
— Played in all 15 games, starting three times and recorded 50 total tackles (17 solo), four TFLs and 3.5 sacks
— Played in all ten games as a junior and started five, racking up 63 total stops (26 solo), four TFLs, a sack, and a PBU
— Broke out in his senior season by starting 12 games and made 135 total tackles which ranked second in the nation (77 solo), 15 TFLs, 5.5 sacks, two forced fumbles, a fumble recovery, three PBUs, and an INT
—  Wore the coveted No. 18 jersey for LSU in 2020 and 2021, team captain
—Graduated in December of 2021 with a degree in sports administration
— 2021 Dick Butkus Award Finalist, 2021 Second-Team All-SEC, 2021 Walter Camp Second-Team All-American

Damone Clark had to wait his turn before getting a full-time role for the LSU Tigers, but from the home-grown Baton Rouge native, the experience was well worth the wait. Clark overcame adversity on several occasions, being displaced as a child in New Orleans from Hurricane Katrina and later a hurricane that hit his new home in Baton Rouge in 2016. Add this to the fact he found himself sitting behind the likes of Devin White and Patrick Queen to start his college career, Clark learned to trust the process and put in the work knowing things would look up for him when his number was called.

Over the last two seasons, Clark has become the vocal leader of the Tiger defense and so respected by his peers that he received the right to don the famous #18 that epitomizes what an LSU Tiger is supposed to be. His leadership qualities combined with a stellar athletic build to produce a playmaker in the middle of the Tigers defense. Clark is the prototypical linebacker prospect NFL teams are looking for, standing 6’3, 240lb with impressive speed and burst in the open field. He does a great job coming downhill against the run like we see on this rep against Alabama, being quick to trigger and bring down #4 Brian Robinson in the backfield.

Clark’s open field speed and range are impressive for an off-ball linebacker as he can accelerate quickly and close ground on ballcarriers attempting to get the corner. Check out this play against Ole Miss where Clark recognizes #2 Matt Corral scrambling to the sideline and hits the gas to cut him off, bringing him down in the backfield for a loss.

Not only is Clark effective at chasing sideline-to-sideline and coming downhill; he also has deceptive short area quickness. Clark has the ability to redirect in short spaces, combining his movement skills with his length to make play on the ball even when he isn’t properly squared up. We see that here on the goal line where Clark shoots the gap, looking to wrap up #24 Snoop Conner, but sees Corral keep the ball, quickly redirecting to wrap up Corral’s legs as the rest of the defense converges to make the play.

Here is another example of Clark’s redirection ability against the crimson Tide, shooting through the A-gap and reads the option give, breaking on #9 Bryce Young when he decides to keep after faking the handoff of Robinson. Clark takes on the contact on Robinson and wraps up Young for a loss in the backfield.

So, Clark can shoot gaps effectively, but can he stack and shed blocks? The answer is yes. Clark has experience playing off-ball as well as at the LOS on the edge, routinely taking on TEs who attempt to blow him back and handles them with his strength and length like we see on this rep against Auburn.

When it comes to coverage, Clark has the athletic profile and the movement skills to run with backs and tight ends in man coverage as well as be an effective zone dropper. We see the former on this play against Texas A&M where Clark picks up TE #85 Jalen Wydermyer running up the seam, getting sticky on his back hip and follows him through the entire route.

Here in the same game, we see Clark effectively cover the flats as Wydermyer breaks to the sideline. Clark quickly diagnoses the rollout pass and breaks for Wydermyer, closing ground quickly and gets right on top of the tight end as he attempts to catch the ball. Clark could have undercut the route here with better execution, but he manages to contest the pass and bring the receiver down short of the chains to force fourth down.

Clark’s range really comes into play as a pass rusher/QB spy that can be extremely valuable in today’s game with so many mobile quarterbacks being able to escape the pocket and create with their legs. Here is the final two-play sequence against the Aggies where Clark racks up back-to-back sacks, being assigned the tailback in the backfield, but commits to the rush when the back stays home to pass protect. In both instances, we see Clark’s closing speed come up big to bring the QB down as he starts to escape the pocket, preventing the Texas A&M comeback.

If I had to point out a couple of flaws on Clark’s game, over pursuit of the football and consistent use of hands to shed blocks are the issues that stick out the most. His angles to the football can be cleaner at times, and while he has the strength and athleticism to shed blocks by offensive linemen, he doesn’t always use his hands to get the job done. Watch this example against the Aggies as Clark engages the LT climbing up to the second level and gets him off-balance, but fails to rip off the block, resulting in a stalemate.

Here is another example where Clark is working laterally on the inside zone run but keeps his eyes in the backfield too long instead of getting to his landmark, allowing #55 Kenyon Green to pick him up at the second level. Clark is in position to get his hat across Green’s outside shoulder but waits too long to see the give to the back on the option, resulting in Green getting him blocked and the runner to get a nice chuck gain on the ground.

Overall, Clark may not have had a quick rise to prominence like other prospects who make immediate impact as starters out of the gate, but he has bided his time behind current NFL starters and looks poised to become one himself in short order. He has the physical tools you desire in an off-ball linebacker, having that range in pursuit as well as the ability to rush the passer that opposing offenses must account for. Clark also has shown growth in terms of making his reads and playing more consistent in coverage during the 2021 campaign, suggesting he still has room to grow as a potential three-down defender at the next level with more reps under his belt.

In terms of pro comparisons, I couldn’t help but see a little Leighton Vander Esch in Clark’s game as the two linebackers are large physical specimens (albeit LVE has him by 10-15lb) that can run, hit, and are effective in coverage. Their movement skills are eerily similar in terms of their straight-line speed as well as the ability to redirect in space, but they also share tendencies of over pursuing the football as times and inconsistent hand usage when it comes to stacking and shedding blocks.

Damone Clark’s name picked up steam as the 2021 season went on, and now has placed himself squarely in that Day Two conversation heading into the pre-draft process. Should he show improvement in his reads and coverage at the Senior Bowl as well as test to the level of athleticism he flashes on tape, Clark could vault himself amongst the top names at the inside linebacker position come April. Given the inconsistent play at linebacker in Pittsburgh the past few seasons and the need for a large, athletic linebacker who can shore up the run defense, Clark has the measurables, pedigree, and leadership qualities the Steelers should find enticing as they go through the pre-draft process.