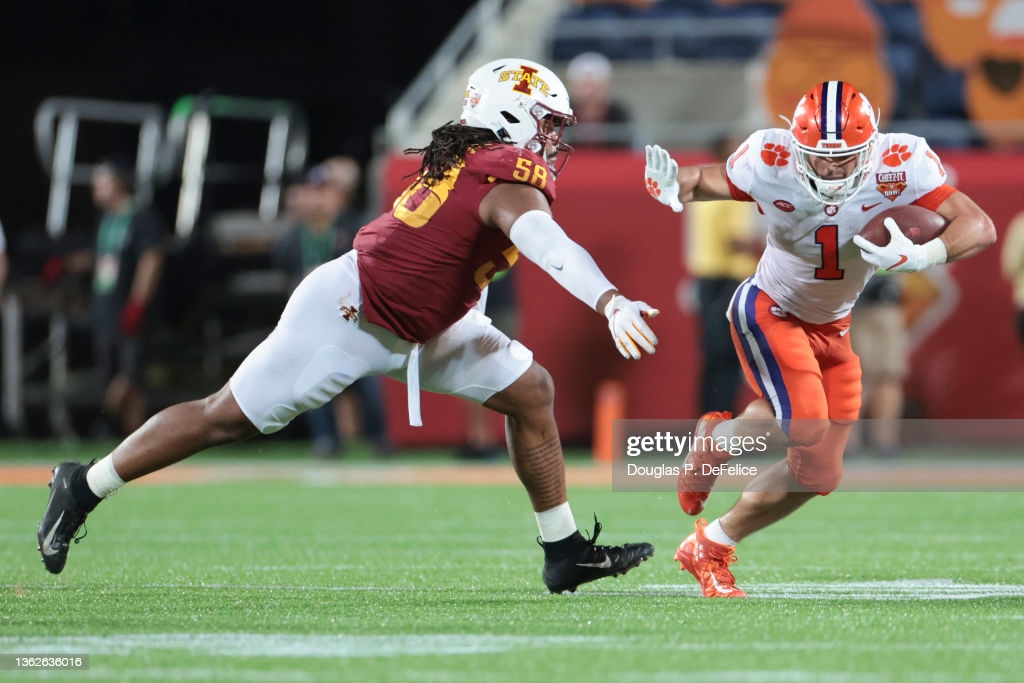 From now until the 2022 NFL Draft takes place, we hope to scout and create profiles for as many prospects as possible, examining their strengths, weaknesses, and what they can bring to an NFL franchise. These players could be potential top 10 picks, all the way down to Day 3 selections and priority undrafted free agents. The Steelers are always on the lookout for defensive lineman who fit their defensive end requirements. This player measures up well.

Versatility and length are major assets for Uwazurike. His frame and arm length fit the “wants” for the Steelers when looking for defensive ends to play the 4i/5 technique. Additionally, at Iowa State he was used up and down the defensive line from playing the nose tackle all the way out to rushing the passer on the edge.

Against the run, he displays solid snap quickness, good hand placement and a strong anchor. He has the play strength to hold his ground versus double team blocks. Using his length and strength he can handle playing in a two gap scheme and set the edge. He has good play strength to reset the line of scrimmage pushing blockers into running lanes. He has good balance and solid lateral agility to scrape down the line from the backside using his length to cut of cutback lanes. He displays solid quickness to shoot into gaps and rip under the block to disrupt running lanes. He is a strong tackler quickly bringing down ball carriers.

At Baylor, Uwazurike (58) is lined up over the center and will quickly swim over him to make the stop in the backfield.

Vs Texas, he’ll take on a double team block from the right guard and tackle, holds his ground and then splits through them to make the tackle.

At Oklahoma, he scrapes well from the back side and makes the quick stop.

As a pass rusher, he has solid snap quickness and uses long strides to get depth with his eyes up on the quarterback. He played mostly from a three point stance but I did see him in a two point as well. He has solid hand placement and leg drive on bull rushes inside and uses his length to push off of tackles. He executes a nice stab move as well as a rip/swim to apply pressure. He makes an effort to get his hands up in passing lanes when the rush isn’t getting home. He has solid quickness as a looper on stunts and good flexibility to dip under blockers. There is good potential to his pass rush.

Vs Iowa, he is lined up right over the center and uses good pad level, hand placement and play strength to bull the center into the pocket.

Vs Iowa, against the left tackle he will use a nice club/swim move to get the pressure.

Vs Oklahoma State, against the left guard he will jab to the inside before rushing to the outside ripping through the block to get the sack.

His mental processing to identify run versus pass is adequate. Against the run, he’ll dip his head at contact losing sight of the runner. In an effort to get to the ball on outside runs he will get turned sideways or even with his back to the blocker rendering him ineffective. He has adequate change of direction and marginal burst when chasing the ball across the field. He must improve his quickness and aggressiveness when shedding blocks as well as aggressiveness when taking on pullers and lead blocks. When rushing the passer, he pops up rather than forward. His pass rush plan was limited and seem indecisive at times of how to attack. He has adequate core strength and gets twisted up top.

Vs Texas, he makes good effort to beat the right tackle to the inside but he doesn’t stay square to the LOS gets his back turned to the ball and loses sight of the runner.

At Oklahoma, he’s a tick slow at the snap and doesn’t get the outside leverage vs the left guard. You’d ideally like to see him stay square while engaged, scraping to the right and then shed the block and make that tackle.

Overall, Uwazurike has very good play strength and length along with versatility along the defensive line. He has scheme versatility capable of shooting gaps and can hold his ground against double team blocks. He has some success with power rushes (bull/stab) and also has shown a club/swim enabling him to get to the passer. Adding some core strength and improving his technique to scrape while engaged staying square to the line of scrimmage will improve his run defense. Quickening his ability to disengage from block and adding to the pass rush plan could make him a valuable defender.

For the Steelers, the defensive line has some questions on who will be back next year. The run defense must improve and a player with his versatility adds value. Being able to play over the center or as a defensive end will give the next defensive coordinator the able to move guys around to keep the offense guessing. For a player comparison, I’ll give you Foley Fatukasi who has a similar build and had a versatile skill set coming out of college with Uwazurike have a better chance to develop as a pass rusher.

Games Watched: 2021 – vs Iowa, At Baylor, vs Oklahoma State, Vs Texas, At Oklahoma