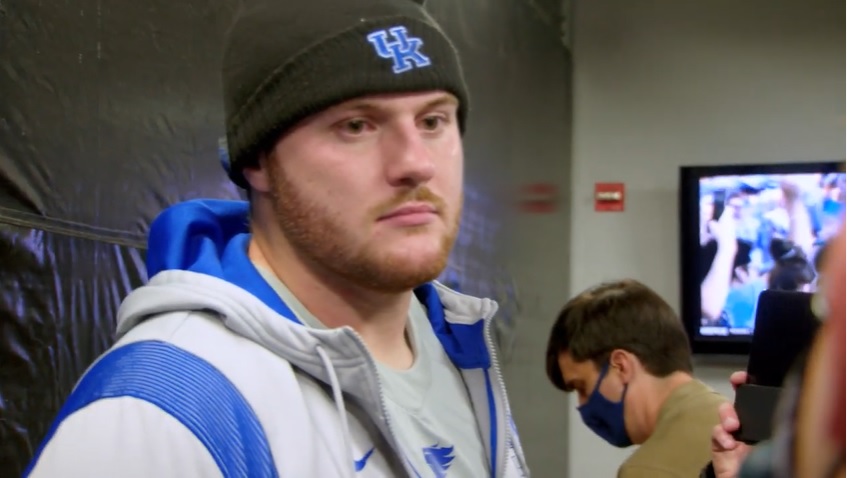 From now until the 2022 NFL Draft takes place, we hope to scout and create profiles for as many prospects as possible, examining their strengths, weaknesses, and what they can bring to an NFL franchise. These players could be potential top 10 picks, all the way down to Day 3 selections and priority undrafted free agents. In this profile I’ll be looking at the man in the middle of a group known as “The Big Blue Wall”.

— Games 55, 36 consecutive starts
— Played center and both guard spots
— 2021 Second team ALL-SEC
— 2021 Second team CoSIDA Academic All-American
— 2020, 2021 semifinalist for William V. Campbell Trophy semifinalist (best combination of academics, community service, and on-field performance)
— Five-time member of the SEC Academic Honor Roll
— Graduated in December of 2019 with a degree in mechanical engineering
— Completed his master’s degree requirements in mechanical engineering and will officially graduate in May of 2022
— Began working on a second master’s degree in business administration in June of 2021 and is also on track to graduate with a MBA in the spring of 2022
— 2021 Team captain
— Also played basketball in high school

Fortner brings some positional flexibility and plenty of experience to the next level. Kentucky was 25th in the nation in rushing yards at 2,594 and they averaged over 5.2 yards per carry. He spent the last two years playing guard and moved over to the pivot this season.

As a run blocker, he displays good snap quickness and gets his hands up quickly. He plays with good pad level and very strong hand strength able to lock on to defenders and sustain blocks while absorbing their initial punch with good core strength. He has solid lateral agility on gap blocks and has a solid hip flip to get around and wall off defenders. He gets a good push inside on down/base blocks to displace defensive tackles and good push on double team blocks. He has solid quickness to the second level and the play strength to control linebackers. He is solid squaring up blockers when pulling to the outside from the guard position.

Vs Missouri, Fortner (79) facing off one-on-one is able to displace the defensive tackle opening the hole to the end zone.

At Georgia, he uses good play level and leg drive to move the defender out of the play.

Vs Tennessee, he’ll chip and move to the second level and locks up the linebacker helping to open a big hole.

As a pass blocker, he shows good quickness and pad level when getting into his pass sets. He has good agility to slide with protection or to mirror inside rushers and uses his length well to keep defenders at an arm’s length. When uncovered he plays with good aggressiveness to help out his teammates. On screen plays, he uses an effective slingshot block to remove the rusher and is effective hinging back inside to cut off second level pursuit. He displays good patience and play strength taking on and nullifying blitzers. He has a good anchor and is able to prevent consistent push in the pocket.

Vs Missouri, he grabs and tosses the defender on this screen before getting to the edge and hinging back to make a block.

At Georgia, here he has a rep versus Jordan Davis (99) and he works well refitting his hands and holding his ground.

I don’t see him as a fit for and outside Zone running scheme. When he loses the pad level battle he can be driven back into the backfield. When climbing to the second level on combo blocks he’s a little quick when leaving the first level blocks. He can get over his toes when too aggressive diminishing his balance. When he feels he has control of the block he will drop one hand and just try to hold them off with one arm. He has adequate foot quickness when pulling to the outside and decelerates into the block. Loses focus at times stopping his feet and turning his head to see what is happening behind him rather than finishing the block. His hand timing is inconsistent in pass pro and will get outside the rushers frame. He is adequate getting out in front of screens to lead downfield. He was adequate recognizing stunts and twists.

Vs Missouri, the defensive line will run a stunt on this play and frankly none of them play it well and with Fortner not feeling the player coming from his right and they give up the pressure.

At Georgia, he has good position on the defender but confidently drops his right hand, using just his left to try to hold of the defender, allowing him to get back inside to help on the stop.

Overall, Fortner has good play strength, very good hand strength and length. He is effective as a blocker on the inside in Zone and Gap/Power schemes. He has plays with good snap quickness and pad level. He uses his length well and has a good anchor in pass protection. I do not see Fortner as a fit in an outside Zone running scheme and is adequate getting out in front on screens. He can tighten up some little things as a blocker in the run game and work on his hands and stunt recognition in the passing game.

The positional flexibility is a plus and while he could play either guard spot I see him as a better fit as a center in a Gap/Power running scheme with some Inside Zone thrown in there. The Steelers will be on the lookout for interior offensive linemen and will get a good look at him at the Senior Bowl.