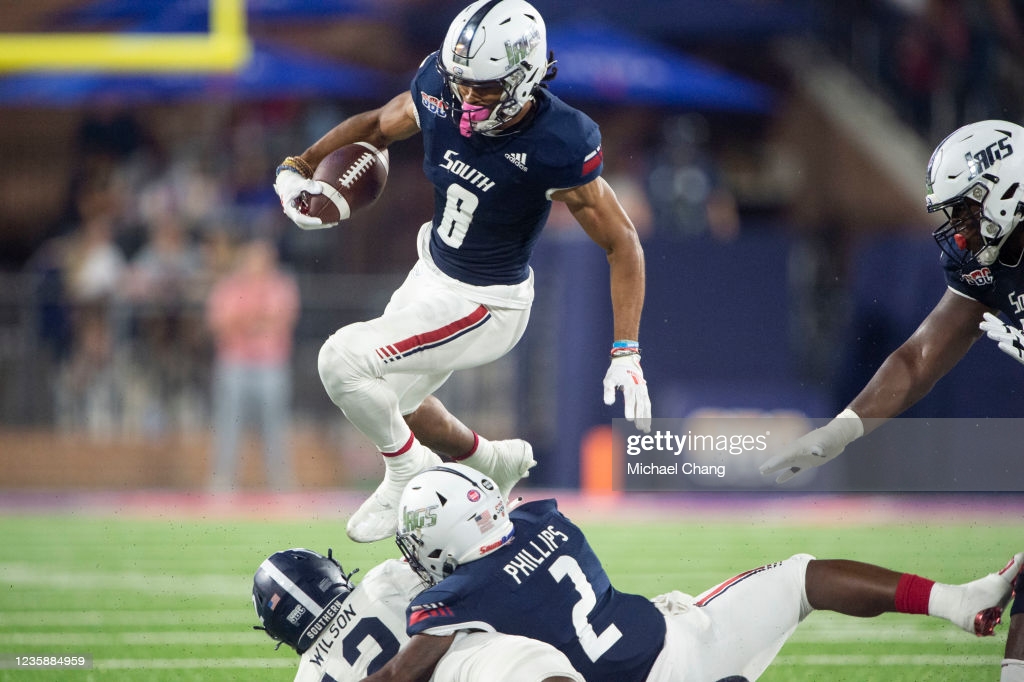 From now until the 2022 NFL Draft takes place, we hope to scout and create profiles for as many prospects as possible, examining their strengths, weaknesses, and what they can bring to an NFL franchise. These players could be potential top 10 picks, all the way down to Day 3 selections and priority undrafted free agents. Today, I’m profiling South Alabama WR Jalen Tolbert.

— Respectable frame with good length and solid hand size, not an overwhelmingly impressive body type but certainly not small
— Downfield threat with good open field speed, big-play capable and a long-strider
— Finds and adjusts well to the ball in the air, able to contort body to make the grab
— Able to catch away from his frame and plucks ball out of air, makes catches in traffic
— Physical player able to beat press and run through contact, able to stack vertically on deep routes
— Stems routes well at top to create separation on vertical concepts
— Good release package to beat press
— Doesn’t stack bad plays and rebounds from mistakes
— Productive and impactful player despite seeing plenty of attention from defenses, gameplanned against and still won
— Consistently a big-play threat throughout his college career, not a flash in the pan
— Volume player and not just a feast-or-famine guy

— Came in fairly shorter than listed (6’3″ vs 6012)
— May lack elite timed speed
— Didn’t run terribly nuanced route tree, mostly vertical game, posts and go-balls, and curls on sight adjustments against off/two-high coverage
— Bit of a straight-line player who isn’t incredibly dynamic after the catch, isn’t twitchy and speed is by far his best asset, though he does run with some power against smaller DBs
— Did not play against top-flight competition
— Most work came on outside as #1 WR
— Despite speed, lacks return value and wasn’t used in run game

Jalen Tolbert is considered one of the top deep threats in his class. There’s no argument he’s been a burner throughout his football career, ever since his senior season of high school. Everyone knew it, no one could stop it. Tolbert won vertically again and again.

So it’s only right that we start this profile highlighting some of that big-play ability. Here’s a couple of examples.

In this All-22 clip, watch him beat the bracket coverage and run past the flat-footed safety.

But Tolbert isn’t just a guy who can fly. Speed isn’t ultra-rare. Tolbert has a decently-built frame and good play strength to fight through contact too, separating him for your conventional burners. I also like his ability to find and adjust to the ball in mid-air.

Tolbert’s mental makeup is also commendable. Great example of it. Drops this pass against Tennessee but comes back the next drive to make this wicked one-handed grab. Receivers drop passes, it sucks but it happens, but I like his response here to put that negative moment away and move onto the next play.

Now, Tolbert is a fairly raw route runner who didn’t run an advanced route tree in school. He knew how to win and he won routinely. They moved him around a little bit, some bubble/RPO game as #3, but he was and fits mostly as an outside receiver, a Z-type of burner in the NFL. I don’t want to fall back on the classic “one-trick pony” thing because he offers more than just pure speed. Last year, a guy like Anthony Schwartz felt like that type of guy (though he was/is faster than Tolbert, for the record). Tolbert is bigger, functionally stronger, with a good pair of hands.

Had a little trouble for the NFL comp and I don’t think Tolbert isn’t quite as “springy” but my comp is Jerome Simpson, a similar small-ish school guy who made big plays in college. Best in a line, a little straight line-ish too but carved out a NFL niche with some wow type of plays. A more modern comp he’ll probably get a lot is Darius Slayton.

Pittsburgh is looking for big-play ability and Tolbert’s track-record suggests he can fill that role though I see him as a #3 than a true, #1 receiver in any offense or even a #2. But Tolbert is a good Z-receiver in 11 personnel.