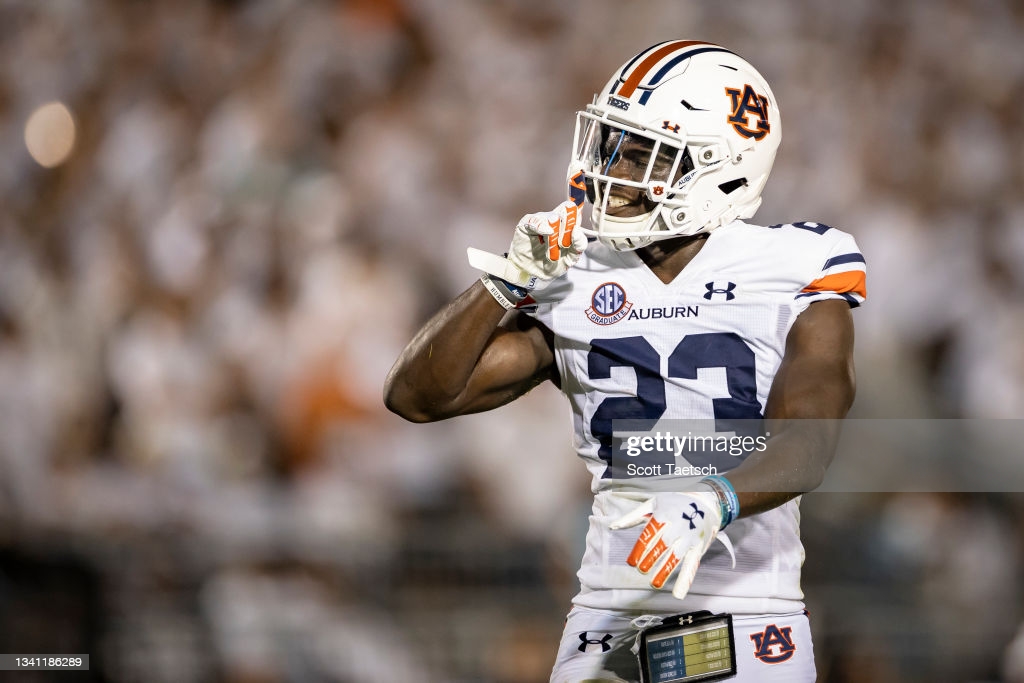 From now until the 2022 NFL Draft takes place, we hope to scout and create profiles for as many prospects as possible, examining their strengths, weaknesses, and what they can bring to an NFL franchise. These players could be potential top 10 picks, all the way down to Day 3 selections and priority undrafted free agents. Today, I’ll be profiling Auburn CB Roger McCreary.

— Impressive man-coverage ability, sticky man coverage and doesn’t allow much separation
— Alpha-dog mentality who went up against college football’s best and didn’t back down from challenges
— Patient and comfortable in press coverage, gets his hips open, fluid turn and doesn’t show stiffness or pop up as he flips his hips, changes directions well in coverage
— Takes good angles to the catch-point to make up for a lack of elite-level athleticism and average/below average size, competitive to fight for the ball and plays well to upfield shoulder
— Smart player and not fooled by double-moves or more nuanced routes
— Versatile, logged extensive time at both outside spots and saw some work in the slot
— Willing tackler with moderate hit power especially for his frame
— Able to bounce back from negative plays, shows short memory on the field
— Highly-productive player in college football’s top conference, good ball skills and INT production
— Quarterbacks seemed to intentionally threw away from him

— Lacks size and bulk, smaller outside corner with poor length for his frame and the position (29 1/4 inch arms), also has small hands (8 7/8 inches)
— Lack of length can hurt him at catch point and cause him to lose out on potential pass deflections
— More likely to knock the ball out before the receiver catches it as opposed to being able to play through hands or rip ball out once its secured
— Can get overwhelmed in run game against stalk blocks by bigger WRs, works hard to fight off blocks and willing against the run but prone to getting swallowed up
— Is not overly physical for switch to slot
— Questions about overall strength to consistently jam or press against larger receivers on the outside
— Will be grabby in man-coverage and could be prone to penalties
— Tends to be overaggressive and can be late to open hips to cover deep routes
— A good athlete but may lack top-end, elite speed and overall athleticism
— Rawer zone corner who didn’t play much of it until 2021

If you’re looking for a man cover corner, Auburn’s Roger McCreary is your guy. Some will question his size but it didn’t stop him from consistently winning against college football’s best. I’m early in my draft process but there won’t be too many better corners in man coverage than McCreary is, especially knowing he wasn’t blessed with elite size or physical traits like some of the corners above him in this year’s class.

Put on the Alabama tape from this year and while he wasn’t perfect, he was very good. Couple examples of him winning in man coverage from that game or others.

And there aren’t too many who picked off Joe Burrow throwing to Ja’Marr Chase. McCreary took his lumps earlier in that game, something he talked to me about when I interviewed him at the Senior Bowl, but he put those plays behind him and made the next one.

Watch him defend these double-moves too. McCreary is a good IQ player who doesn’t often take the cheese and get beat deep.

Overall, he’s a fluid, patient corner who takes good angles to the football and is able to finish most of the time. He’s also a decent tackler with good hit power for his frame and didn’t allow much YAC. He didn’t have gaudy interception numbers but racked up the pass deflections, 14 of them in 2021 to lead the SEC and rank fourth most in the NCAA. Overall, McCreary was a consistent cover corner despite facing difficult matchups on a near-weekly basis.

I didn’t see a ton of negatives in his game. The biggest is obvious – his lack of size. He’s on the lighter side at 189 pounds and his length, well under 30-inch arms, is going to put him in a low percentile, especially for an outside corner. He saw some work in the slot in college and teams may project him inside but he showed the ability to cover on the outside in the SEC. I think he can do it in the NFL, too. That lack of length can hurt him at the catch point. Here, he misses his swipe and can’t break up the pass against LSU.

McCreary is likely to be one of my favorite corners in this years class, especially because he doesn’t wow with incredible traits. He’s a smooth, technically sound player and also, to be fair, a plus athlete. In some sense, he reminds me a bit of Cam Sutton but a better version, a little more athletic than Sutton was coming out. During the Senior Bowl, the NFL Network made a solid comparison to Steven Nelson and I’ll throw in a Patrick Robinson comp for those who want to go a little further back.

Overall, I’m a fan of McCreary’s game and he would be in a good fit in Pittsburgh though assuming they re-sign one of Joe Haden or Ahkello Witherspoon, McCreary will be off the board by the time the Steelers consider the position.