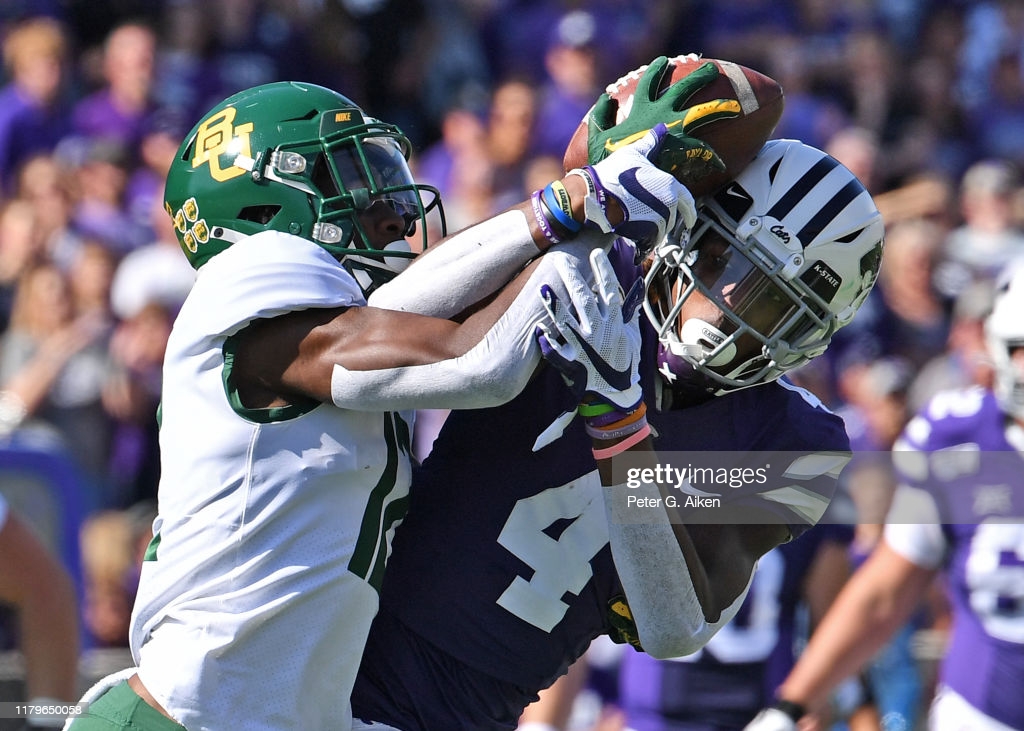 From now until the 2022 NFL Draft takes place, we hope to scout and create profiles for as many prospects as possible, examining their strengths, weaknesses, and what they can bring to an NFL franchise. These players could be potential top 10 picks, all the way down to Day 3 selections and priority undrafted free agents. Today, I’ll be profiling Baylor CB Kalon Barnes.

— Appears to have a natural feel in press bail
— Has shown great range in Cover 3, can cover the sideline to the near hash quickly and efficiently
— Is quick and efficient in his transition from a crossover run to breaking downhill
— Uses mirror press/inch tech well in press coverage/forces receivers off their path with his feet before squeezing to the sideline, leaning, and locating the football
— Does well re-routing and sinking as a flat defender in Cover 2, helps take away intermediate throwing windows and force checkdowns to the flat
— Has the speed and frame to carry receivers vertically downfield, rarely allows downfield separation/explosive play opportunities
—Predominantly played the field cornerback position at Baylor, making his transition to defending NFL hashes much easier/smoother
— Has experience playing both left and right, as well as field and boundary corner, once again making it easier for him to transition to the next level
— Stays calm and does a good job of locating the football and playing the pocket when arriving from trail position/out of phase
— Does a great job playing the fade ball/back shoulder in the red zone, gets chest to chest and uses length to play the catch point
— Has solid, if not phenomenal hip mobility, which, combined with his world class long speed, allows him to transition to carry receivers downfield effectively
— Overall, extremely solid athlete at the position, his movement skills will likely test very well and impress scouts at the upcoming NFL combine

— Has a tendency to over pursue and lose outside contain as a run defender
— Needs to improve his ability to defeat stalk blocks, too often gets taken out of the play by receiver’s on bubble screens and runs to the perimeter
— Must work to get hands on in press coverage/needs to mix up his press looks, solely relies on mirror press
— Needs to do a better job of protecting his inside leverage in the red zone, is much better at defending out breaking routes than in breakings near the goal line
— Did not play full games despite starting status, was in a four man rotation at cornerback in Baylor’s defense
— Not an overly physical player, will tackle, but doesn’t look to stick his face in the fan regularly/similarly struggles with physical receivers downfield

When I traveled to Las Vegas for this year’s East-West Shrine Bowl, I had a simple goal: identify the standouts at the defensive back and wide receiver positions. After four days of observing 1v1 drills, as well as 7v7 and full team sessions, it was abundantly clear that Kalon Barnes was the standout defensive back on the West roster. Throughout the week, Barnes showed his ability to thrive in zone coverage assignments during team sessions, as well as proving to be the only defensive back capable of matching Oklahoma State’s Tay Martin and his former Baylor teammate Tyquan Thornton in WR/DB 1v1 drills.

In terms of raw straight line speed, there may not be another cornerback in this year’s class who can run with Kalon Barnes, who set the Texas High School 100 meter dash record in 2017, clocking at 10.22. While his world class speed doesn’t exactly jump off the screen on tape, he rarely allowed any vertical separation throughout his collegiate career, with the couple downfield receptions he allowed coming in contested catch situations.

On the rep below, from the Big-12 Championship game this past season, Barnes aligns in press coverage, using a mirror press before opening to carry Tay Martin vertically. Downfield, Barnes is able to use his speed to stay on top of Martin, squeeze him into the sideline, lean into his body, turn to locate the football, and fight through plenty of offensive contact to play through the hands and secure an impressive downfield pass breakup.

Although he’ll certainly need to diversify his press game before heading to the next level, Barnes athleticism and trust of his long speed makes him extremely effective when using a mirror press. Particularly in the red zone, Barnes’ use of the mirror press allows him to stay on top of receivers, get chest to chest, and play the football, where many other cornerbacks are susceptible to the fade due to their overly aggressive press techniques which put them into trailing position. On the clip below, a red zone rep from his sophomore season at Oklahoma State, Barnes aligns at 2.5 yards depth pre snap, working to match the receivers release with inside leverage before running to the fade, getting chest to chest, turning to locate the football, and skying to pick the fade ball, showing some burst to get a healthy return afterwards.

On another red zone rep, this time working against the talented Tay Martin in this past season’s Big-12 Championship game, Barnes once again deploys his patented mirror press. This time Barnes aligns closer to the line at about 1 yard depth, matching Martin’s outside release with inside leverage before getting chest to chest to eliminate back shoulder and squeeze the receiver into the sideline, turning to locate the football, and disengaging to violently swipe through the receivers hand and dislodge the football for a timely PBU.

One area where Barnes stood out to me at the Shrine Bowl was in his ability to occupy flat zones in a Cover 2 scheme, where he is able to reroute receivers and bait quarterbacks into taking hole shots before closing intermediate throwing windows up with his speed. On this rep below against Kansas this past season, Barnes squats at six yards depth, forcing the receiver wide down the sideline before turning and squeezing the receiver into the sideline, giving the quarterback no window to put the football.

Similarly, when using a press bail technique as the deep 1/3 defender in a Cover 3 zone, Barnes is able to use his athleticism to cover plenty of ground. Below against Kansas, Barnes aligns in press coverage before opening into a crossover run at the snap, working to stay on top of the receiver, eliminating threats deep down the sideline and up the seam. As the receiver breaks off on a hitch route, Barnes is able to quickly flip his hips and drive the throw, closing ground efficiently and arriving to contest the catch point. Cover 3 is a staple defense in the Steelers single high scheme, and as I noted repeatedly in Ahkello Witherspoon’s film, cornerbacks who can stay patient and contest quick game concepts while serving as deep 1/3 defenders are a rarity and luxury to defensive coordinators at all levels.

While it is no longer the necessity that it was under legendary defensive coordinator Dick Lebeau, a cornerbacks ability to tackle in the Pittsburgh Steelers defense, as well as others across the league, still holds value. While Kalon Barnes will never be confused as an elite run defender and does not appear to offer much within the box, he regularly made open field tackles when called upon. On the rep below from this past season against Oklahoma, Barnes steps up and makes a nice form tackle, wrapping around the waist and running his feet on contact to prevent a Sooners explosive play on the double reverse.

Generally speaking, Barnes overall lack of physicality is his biggest negative trait, and the one which he will need to focus on improving in his transition to the next level. This is not to say it can’t be done, see Tre Norwood’s college to NFL transition for a recent example, but is a red flag on his collegiate tape regardless.

On the rep below from this year’s Big-12 Championship game, Barnes identifies the bubble screen, but comes downhill tentatively and is driven back five yards on contact by Tay Martin, creating an easy lane for the ball carrier to scamper along the sideline on first down. While a cornerbacks job on bubble screens is traditionally to force the ball back inside, rather than make the tackle, getting washed out of the frame by a receiver is unacceptable, and does little to force the ball carrier inside to the oncoming help defenders.

Similarly, Barnes lack of physicality and functional strength shows up on his reps jostling with receivers for positioning downfield when he is working to squeeze and locate the football. Below on a rep from this past season against BYU, Barnes effectively squeezes the receiver into the sideline and has perfect positioning on top of the route, but ultimately loses his footing on a subtle throwby from the receiver, ultimately allowing a contested reception on the deep ball.

Overall, Kalon Barnes sits atop the 2022 cornerback class in terms of pure raw traits, with the prototypical size, speed, and short range quickness to thrive at the NFL level. That being said, he will need to show improvement in the physicality department and undergo some refinement of his technique before he is ready to contribute on defense at the next level. From what I was able to witness at the Shrine Bowl, as well as what is on his collegiate tape, Barnes likely fits best into a zone scheme, which predominantly features him as a flat defender in Cover 2 and a deep ⅓ defender in Cover 3.

Barnes has promise to develop into an elite press coverage defender at the next level with his unique combination of speed and length, but until he learns how to utilize his hands at the line of scrimmage and add nuance to his press game, he will continue to struggle containing inside breaking routes. Both in his frame and top tier speed for the position, Barnes reminds me of former Baltimore Raven and Oakland Raider Fabian Washington, who put together a successful, yet short lived NFL career, with 221 tackles, 6 picks, and 57 passes defended over his five year career.

If Ahkello Witherspoon is retained, and the Steelers enter the draft with two NFL caliber starters on the boundary in Witherspoon and Cam Sutton, Barnes could be a perfect mid to late round pick, who could learn the ropes while likely serving as an elite gunner on special teams. Ultimately, if he is able to add nuance to his toolbox in press coverage, add strength, and become a more willing and physical tackler at the NFL level, Barnes could carve out a lengthy and successful career as a starting caliber cornerback, regardless of where he is selected this spring.