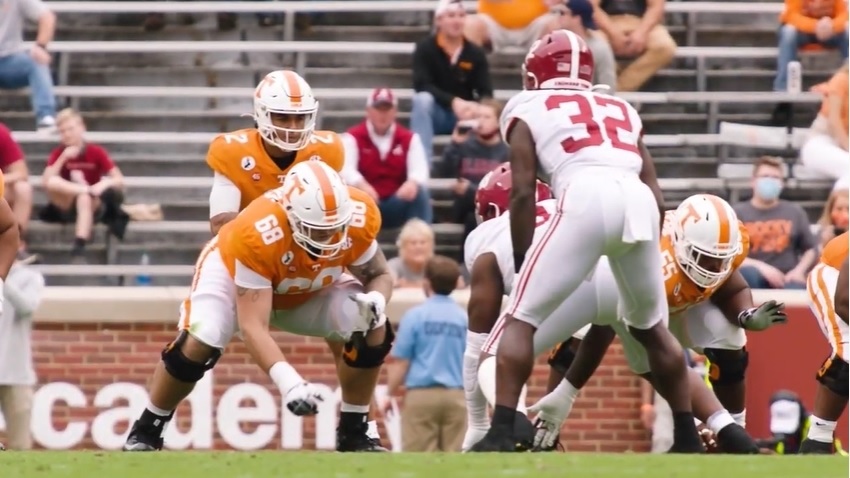 From now until the 2022 NFL Draft takes place, we hope to scout and create profiles for as many prospects as possible, examining their strengths, weaknesses, and what they can bring to an NFL franchise. These players could be potential top 10 picks, all the way down to Day 3 selections and priority undrafted free agents. Today, I’ll be profiling versatile Tennessee offensive lineman Cade Mays.

— Well-built, fills out frame and carries weight well with extremely long arms and big hands
— Plus run blocker especially at the first level on base/drive blocks and down blocks, creates movement at the point of attack with strength and lower half leg drive
— Sets hips well in run game and understands angles
— Nasty demeanor, desires to finish blocks and capable of pancaking smaller or defenders who don’t match his intensity
— Able to anchor and stall out bull rushes in pass protection, real functional strength in run and pass game
— Shows good burst off the ball in the run game and has experience and competency as a puller at tackle and guard
— Versatile with experience playing all over the offensive line, work at tackle, guard, and center
— Experience with a varied pass sets, effective quick/jump setter with good grip strength to latch on and control block in pass pro when he wins early
— Flexible and gets good bend in his stance, looks comfortable with his hand in the ground and doesn’t sit high/tall
— Excellent starting experience and played against top-level competition
— Good football bloodlines

— Limited athlete who struggles most with speed and outside rushes
— Plays with too much forward body lean when trying to defend the edge, causing him to lunge, lose power, and stop his feet
— On the ground more than you’d like to see and needs to improve balance and footwork
— Shows burst but struggles out in space on screens to throw blocks for the back
— Better in man and gap schemes, has trouble flowing down the line on wide zone runs, will fall off too quickly to the frontside
— Likely to fit better along the interior than tackle, hurting his versatility card
— Struggled the most against elite SEC defenses (Georgia game)

— Four-year starter, 35 throughout his career
— 18 starts at RG, 13 starts at RT, 2 at LT, 2 at LG, also saw emergency, mid-game work at center while receiving reps there at the Senior Bowl
— Began career at Georgia, played two seasons there before transferring to Tennessee
— Left UGA after his father lost a finger in an accident at the school during a 2017 recruiting event (finger got caught in a folding chair), Mays transferred when his father sued the school in late 2019-early 2020
— Received transfer waiver and didn’t have to sit out a year
— Five-star recruit out of high school, #19 prospect in the country and third best OT, chose Georgia over Alabama, Florida State, Clemson, Ohio State and many other schools
— Had 75 pancakes and two rushing TDs his senior season
— Father played guard and was a captain for the Tennessee football team, brother currently plays center for the Volunteers

On the clear positive end of things, Mays is an impressive run blocker, especially in a phone booth. He’s got great size and length to match with rare 34+ inch arms for a guy with just average height. Mays plays with a nasty disposition and is an effective first-level run blocker who can create movement there. I like his finish and effort through the whistle, too. Overall, he’s a very good run blocker.

Mays, #68, is the right tackle in all of the clips of this article.

Mays’ strength carries over in the pass game. Mays has a big lower half and able to sit and anchor in pass protection, stalling out opposing bull rushes. Defending the bull rush is difficult and often doesn’t look pretty but Mays makes it look easy.

I especially loved this clip against Pitt. Watch the grip strength and ability to control this block the entire length of the play. Maybe the RDE was containing a bit but still, Mays mirrors and locks on from start to finish. Really impressive.

On the negative, Mays is a limited athlete who struggled to defend the edge. He especially had a tough time against Georgia’s elite defense, the best reflection of what the NFL has in store for him. Mays tends to lunge and fall off the more he works in space in pass pro and in the run/screen game. Couple of examples.

His versatility and experience playing literally every spot along the offensive line is a plus. Not only does that improve football IQ, Mays probably has as good an understanding of how a line works as a unit as anyone in this class, that versatility will help get him a hat early in his career.

It’s a bit tricky determining his NFL comp because you’re looking with some for his kind of versatility. I’d put his career arc between Adam Snyder (Mays is a little bigger/longer) and Matt Slauson (Mays is a little less athletic) but overall, a serviceable starter and quality backup. I view Mays best home to come at guard at the NFL-level while filling in at right tackle if injuries strike a line.