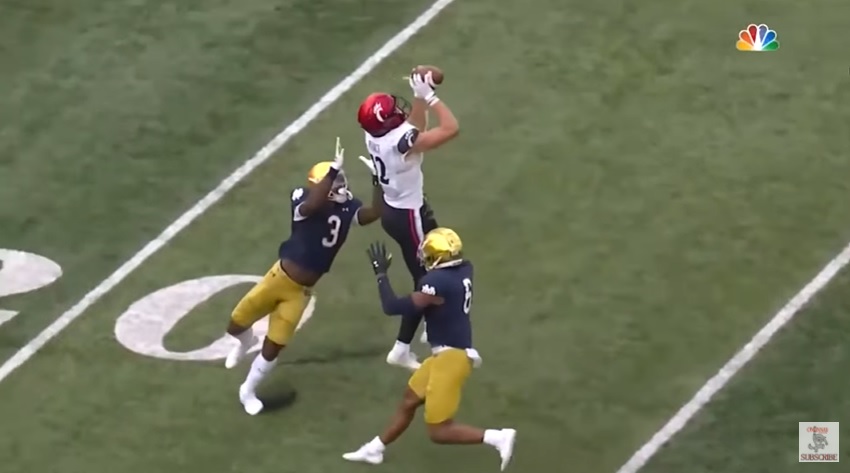 From now until the 2022 NFL Draft takes place, we hope to scout and create profiles for as many prospects as possible, examining their strengths, weaknesses, and what they can bring to an NFL franchise. These players could be potential top 10 picks, all the way down to Day 3 selections and priority undrafted free agents. Today I’ll be profiling a height/weight/speed prospect at the receiver position.

— Height/Weight/Speed combo, estimated speed will be the low 4.4’s
— Capable of playing all three WR’s spots
— Uses his hands and feet well to defeat Press
— Creates space with physicality, quickness and speed
— Consistently was able to stack defenders and win over the top
— Soft hands and very good body control
— Red Zone monster with big time vertical
— Team player willing to run block at the LOS or downfield for teammates
— Birthday May 2, 2000 (age 21 years)

Being mentioned on Bruce Feldman’s Freaks List will always draw attention and get you noticed. Pierce was big part of the successful season had by the University of Cincinnati. He has all the measurables you want to see and on the field he showcased them. He played inside and outside and is a playmaker with very good athleticism.

Let’s start with his route tree. He was used on all three levels playing on the outside and in the slot and showed improvement in his route running. Playing against off coverage he shows good acceleration and drops his hips well on at the break point. Against press, he displayed good foot quickness, varied his release timing and used his hands well to chop and swipe to avoid jams. He has good mental processing versus Zone coverage to find the soft spot and turning quickly to give the quarterback a good target.

At Notre Dame, Pierce (12) at the bottom of the screen doesn’t get the ball here but he is able to drop his hips and accelerate at the top of the route to create separation.

Vs SMU, at the bottom of the screen he’ll use a jab to the outside, get vertical to the inside and physicality at the top of the route to create separation. A little bobble but he secures it for the score.

Vs Alabama, another example of him being able to create space one on one in the red zone. Unfortunately this ball was defected at the line of scrimmage.

To create separation he used a variety of styles. He effectively uses his physicality to press on the defender or use subtle nudges the top of routes and also can use quickness and acceleration to create space as well. The ability to change direction was good shaking defenders on whip routes. He consistently was able to stack defenders and win the deep routes with speed and acceleration. Balls thrown his way are plucked away from his body and he shows very good body control and ability to adjust all around his frame tracking the ball very well. Winning 50/50 balls is a big part of his game and his rumored vertical is said to be around forty inches. With his size and speed he is a very good red zone target capable of going up and over defenders.

At Notre Dame, here are a couple examples him winning to the outside at the line of scrimmage and showing his acceleration to open up space. The first at the top he finishes by high pointing the ball. The second from the bottom he tracks it nicely over his shoulder.

Vs Tulsa, from the top of the screen he will run a slant, hit the brakes and reverse field. Nice display of his change of direction.

Vs SMU, at the top of the screen he’ll show his body control and ability to adjust on this touchdown catch.

Vs Houston, at the bottom he’ll use a jab and swipe the hands to get inside of the DB. As he is getting vertical he will press to the outside to get defender off balance and then he tracks the ball very well to make a terrific catch.

Being a team player was a big part of his game. Whether it was running a rub to set up a wheel route or blocking for a teammate downfield he was doing his part. In the running game, he was a willing blocker when blocking down on the edge, mirroring the corner on the outside or seeking the safety on the second level. He showed good effort to breakdown and use his size and length.

Vs Houston, he will sell his route at the top and when he sees the RB break free he races to get inside his defender to cut off his lane. Good effort and execution.

Vs Alabama, from the tight slot he executes this block well on the safety keeping him out of the play.

There was a small false stem on his release lifting up his back foot and putting it down before release. I didn’t see many out-breaking routes on the intermediate level and no screens on the short level. That may not be on him and may just be scheme. There is room for improvement on his comeback/hitch routes to work back more quickly to create space. I did see a couple drops (hitch and post) and a bobble (slant). He didn’t create a lot after the catch in games watched and didn’t break tackles. When blocking he need to improve his sustain to not let defenders slip off him.

At Notre Dame, at the top the defender is in off coverage and he can’t get around him. Also saw this on comeback routes. Something for him to work on.

Overall, Pierce is very athletic, can play inside or in the slot and can be used throughout the route tree. He can beat Press with quickness and hand usage and can win consistently on deep routes. The ability to create space is good, he adjusts well around his frame and can sky above defenders. Continuing to improve his route running as well as his ability to create after the catch would really round out his game.

The Steelers wide receiver group has a chance to look quite different this coming season. The lack of speed and the ability to separate were severely lacking on the offense. Pierce has both of those traits and the ability to play all three wide receiver spots. He is best on the intermediate and deep levels and has the “my ball” mentality to win the contested catches. Pierce could play the big slot or Z receiver spot as a starter right away and back up the X as well. His combination of size and speed are a fun combination. For a comp I’ll go with Tee Higgins for his ability to play multiple spots and win above the rim.