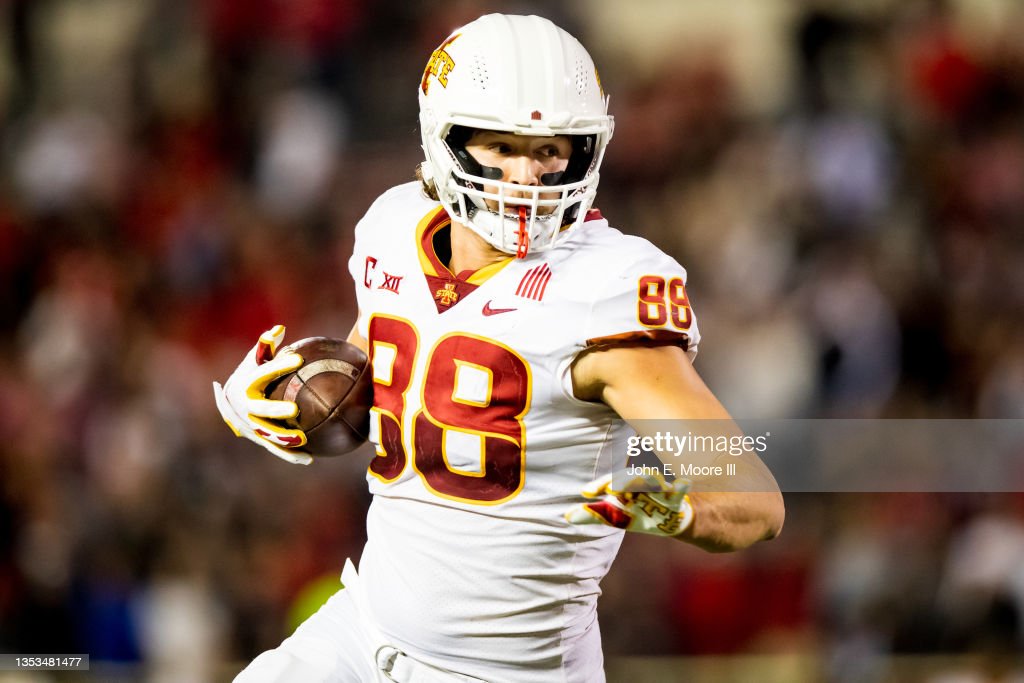 From now until the 2022 NFL Draft takes place, we hope to scout and create profiles for as many prospects as possible, examining their strengths, weaknesses, and what they can bring to an NFL franchise. These players could be potential top 10 picks, all the way down to Day 3 selections and priority undrafted free agents. Today, I’ll be profiling a tight end prospect that has improved his game each season at the tight end position and looks to be a potential value in a deep TE class this spring.

— Great size and the frame you desire in a traditional tight end prospect
— Has deceptive rolling speed as he gets moving down field rather than WR/TE hybrid speed
— Height and leaping ability make him a viable red zone, 50/50 ball target
— Has lined up in-line, split out wide, in the slot, and in the H-Back position
— Natural hands catcher that can make catches outside of his frame at different levels
— Size and strength allow him to work off the jam at the LOS relatively easily
— Smooth route runner that knows how to create separation at the top of his route
— Gets into the defender to break out of his route to use his size and strength to his advantage in his breaks
— Used very well on the over route, shallow crossers, TE/slot wheels, post/corners, and up the seam
— Finds the soft spots in the zone coverage to give his QB an easy target
— Dangerous up the seam from the slot or in-line since he can outrun backers and out-physical safeties
— King at the catch point by high pointing the football in the air and attacking the catch with strong hands
— Can post up defensive backs well and box them up for the lob downfield
— Has the catch radius to climb the ladder and go get balls the QB throws up there, trusting him to come down with
— Has good body control when attempting to make catches in the end zone or along the sideline
— Can play through contact at the catch point and make the difficult catch while getting hit
— More than willing as a blocker in the run game whether in-line or split out
— Will stay on his blocks and drive his feet to create running lanes

— Good athleticism for his size, but won’t wow you with his speed or explosiveness
— Not the most elusive runner after the catch or has the lateral movement skills to create ample separation as a route runner
— Can stand to add more functional strength to have a stronger base at the point of attack in the run game.
— Willing blocker, but doesn’t produce the push off the LOS in the run game or when asked to cut defenders off on the backside
— Occasionally misses blocks at the second level, needing to be more consistent at locating and engaging his assignment

Charlie Kolar grew up a die-hard Sooners fan in the town of Norman hoping one day to play for his hometown team. Oklahoma wasn’t interested in offering him out of high school, but Kolar’s decision to attend Iowa State and play for Matt Campbell proved to be a great one for the tight end. Kolar has become a force for the Cyclones after four seasons, owning many career records at the tight end position in Ames, IA. He may not be the ultra-athletic prospect we have seen with some prospects as of late, but by no means is he lacking in this area.

Kolar possesses great play strength and deceptive speed that builds as he gets going. Here we see he height and athletic profile come into play against Oklahoma as he aligns in the slot on the left side of the formation. He runs up the seam and manages to get the defender on his backside at #15 Brock Purdy puts the ball up in the air. He locates the ball and high points it over the middle of the field while elevating into the air with the defender in coverage, coming down with the contested catch to move the chains.

His size and leaping ability make him a mismatch in the red zone and in jump ball situations against most defenders he will face. Here against Iowa, we see Kolar use his body well by keeping the defender on his back hip and is able to make the catch while contested on slant pattern, getting a step of separation out of his break and holds onto the ball while the defender attempts to deflect the pass and knock the ball out.

Here is another great example here of Kolar’s contested catch ability against #8 Jalen Pitre in tight contested coverage on a one-on-one drill where Kolar runs the whip route and makes the snag laying out for the football over Pitre’s outstretched arm which he ended up getting penalized for pass interference.

Kolar’s size and leaping ability make him legitimate red zone weapon, having the height and long arms to go up and get 50/50 balls regularly. Here we see Kolar’s jump ball ability against Texas Tech where he comes off the line the fade route up the right sideline, getting right up on the defender in coverage and turns around to box out the defender like a power forward and come down with the back shoulder fade in-bounds for the score.

If you want to see a glimpse of Kolar’s body control and ability to come down with circus catches, take a look at this grab against Kansas where Kolar runs the scramble drill to the back corner of the end zone for Purdy to try and throw it up to him. Kolar goes up into the air and snags the ball that is high and outside, having the awareness to stick his left toe into the ground as he twirls into the air to come down with the score on the wild catch.

While being a jump ball specialist with a basketball background, Kolar is a well-rounded receiver with soft, sure hands and can make a variety of catches from different platforms. In this clip against Oklahoma, we see Kolar work the middle of the field on the over route and manages to get overtop the defender in coverage and makes the grab along the left sideline, diving and reeling in the catch while adjusting to the ball that is thrown low to the ground.

Kolar is also a good route runner, being able to create enough separation to get open considering his 6’6, 256lb frame. Here against the Sooners, Kolar comes in-motion from right to left into the slot, attacking the cushion by the nickel defender on the snap of the football and breaks out to the left sideline on the out route, getting ample separation from coverage and catches the ball in-stride as his momentum and the defender trailing from behind take him out of bounds.

Here’s another example against the Hawkeyes where Kolar aligns detached from the LOS on the left side immediately getting into DB #4 Dane Belton tasked with covering him but breaks back to the football on the comeback route, turning up field and evades Belton’s tackle attempt before getting chopped down by another defender after he picks up the first down.

Kolar is also a willing blocker that to play his part in the run and impose his will when the opportunity presents itself. He runs his feet well on contact and will try to maintain his blocks to and through the whistle. Down at the Senior Bowl, we got to see Kolar in run blocking situations but also stay at home in pass protection. He represented himself well there for most of the week like we see on this rep against #20 Kyron Johnson, getting a good punch inside his pads and plays with a strong base, sitting his hips down in pass protection to stall the rush and win the rep.

Still, Kolar could stand to add more functional strength to his frame to enable a stronger base and punch to displace defenders in the run game. Here we see Kolar have a problem in cutting off #97 Zach Van Valkenburg, allowing him to cross his face as he falls off his block and the defender gets into the play from behind.

Overall, Kolar is a well-rounded prospect that can impact the game in all levels. He can line up anywhere on the formation and present mismatches for defensive backs and linebackers with his size/athleticism combination. He would fit in well in nearly any scheme proving to be a great asset in run heavy systems that utilize play action or spread systems to get the mismatch you want. He will need to continue getting stronger to be more reliable and consistent as an in-line blocker, and adding some additional mass to his long frame could go a long way and helping that facet of his game.

His play style reminds me a lot of long-time Viking and current Giants TE Kyle Rudolph who also isn’t a freak athlete but is a quality blocker and red zone/jump ball specialist with great size who can be a great security blanket for his QB. While his athletic upside may be capped from a speed/explosiveness perspective, he should look to contribute early at the next level and grow into his own as a legitimate playmaker after a season or two.

In the case of Pittsburgh, TE may not be high on their list of needs, but given the expected loss of Eric Ebron and how they view Zach Gentry as their TE2, the sheer depth of the position in the draft and the value Kolar may present if he gets pushed down the board could present the team with good value. Given his production, skill set, and football character, Kolar could be a player on their radar later this spring.