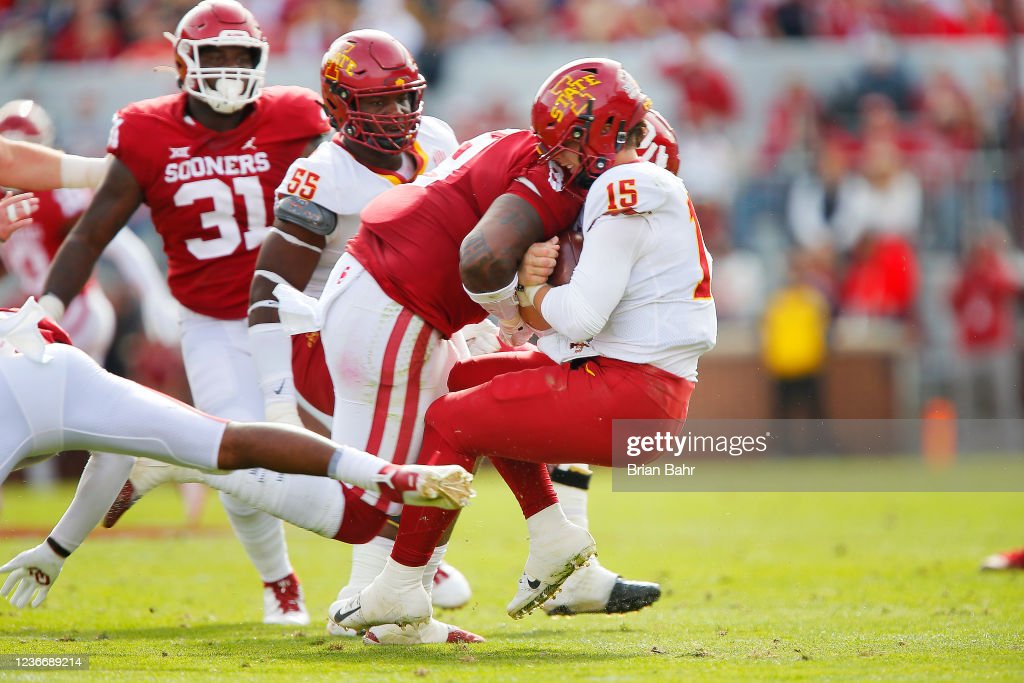 From now until the 2022 NFL Draft takes place, we hope to scout and create profiles for as many prospects as possible, examining their strengths, weaknesses, and what they can bring to an NFL franchise. These players could be potential top 10 picks, all the way down to Day 3 selections and priority undrafted free agents. Today, I’ll be profiling a defensive lineman that had up-and-down play during his college career, but is coming off a standout Senior Bowl performance that may send his draft stock soaring.

— Has the prototypical size and length you look for in a interior defensive line prospect
— Possesses long arms to engage blocks quickly to keep them off his frame
— Long arms and wingspan aid in his ability to impact passing lanes and deflect throws near the LOS
— Has played 0-technique head-up on the center all the out to 5-technique
— Explosive out of his stance when engaging blockers on the snap of the football
— Has good burst and pursuit of the football as a pass rusher, pairing strength and explosiveness to penetrate gaps
— Well-utilized on twists and stunts upfront to allow him to shoot gaps
— Uses a swim move or hard rip move as a pass rusher to get through blockers
— Motor runs hot from the snap of the football to the echo of the whistle playing with all-out effort
— Was a vocal leader down in Mobile, having his words and play positively energize his teammates on the defensive side of the football
— Production/disruptiveness at the Senior Bowl suggest that he was playing out of position while at Oklahoma with a ceiling to be a better pro player

— Appears stiff as a runner in the open field and when asked to quickly change direction
— Will get upright when engaging blockers, needing to play with more consistent pad level
— High pad level and inconsistent base leads to balance issues, causing him to end up on the ground
— Can be erratic at times in his movement, causing him to take himself out of a play
— Has played nose tackle with the Sooners, but not likely his best fit at the next level
— Still is rather raw at the position given his two years at the JUCO level and modest production at Oklahoma
— More disruptive than productive when it comes to recording tackles, sacks, and TFLs
— Will struggle when asked to drop anchor and take on double team blocks against the run, being susceptible to losing ground and leaning into the block
— Shows hand usage, but needs to be more consistent at shedding blocks and having a counter move when initial rush fails
— Tends to jump on the pre-snap clap or in anticipation of the snap, potentially leading to offsides calls

— Senior prospect from Maywood, IL
— Rated a three-star prospect, but was not heavily recruited due to failing to meet academic requirements
— Began his college career at Iowa Western Community College at the recommendation of coaches at Iowa State
— Recorded 55 tackles with 23 tackles for loss and 9.5 sacks in two seasons at the JUCO level
— Rated the best Junior College prospect in the nation and chose Oklahoma over Alabama, Baylor, LSU, and Texas
— Enrolled at OU in January 2020 majoring in communications
— Played in 11 games with eight starts in 2020 and totaled 19 tackles (nine solo) with six tackles for loss and three pass breakups
— Started all 12 games in which he played at defensive tackle and totaled 23 tackles (12 solo), 11.0 tackles for loss, 5.5 sacks, two QB hurries and one forced fumble
— Opted out of the 2021 Alamo Bowl to prepare for the NFL Draft
— Second-team All-Big 12 in 2020 and 2021, Senior Bowl MVP

Perrion Winfrey had to take the unconventional route to become an NFL prospect after having a successful high school career but didn’t have the grades for admittance into the top FBS programs that were looking to recruit him. He ended up at Iowa Western Community College in my backyard and played well there before earning a scholarship with the Sooners. In two seasons in Norman, Winfrey displayed positional versatility as well as a motor that runs hot on nearly every snap. The Sooners had him line up all over the defensive line, ranging from nose tackle to 5-tech in the B-gap of the guard and tackle.

When watching Winfrey on tape, the first thing that sticks out is his first step quickness off the snap of the ball. He has good burst out of his stance and excels at shooting gaps and being a penetrating force along the defensive line. Watch this play from Senior Bowl practice where Winfrey sneaks through the A-gap between the center and RG and blows up the play in the backfield for a loss.

He does a great job penetrating gaps and keeps his legs running on contact to work through blocks in attempt to make plays. Here is another example of Winfrey penetrating the LOS against Texas where he works through the block of the LG and shoots into the backfield to wrap up the running back behind the line for a loss on the play.

Winfrey’s motor pops on film as the guy runs around like his hair is on fire on every snap. This aids in his ability to shoots gaps and cause havoc upfront like we see on this play against West Virginia where Winfrey works off the block by the center but ends up on the turf after tripping. He still attempts to wrap up the passer’s legs, forcing him to get rid of the football which ends up being an intentional grounding penalty.

His first step quickness and strength at the point of attack with his long arms allow him to push the pocket against single blockers and have a chance to pressure the quarterback, if not get home. Here against the Longhorns, we see Winfrey engage the LG on the twist and locks him out with his feet running frantically, walking him back into the lap of the QB who attempts to escape but gets entangled by Winfrey who gets off the block and brings him down for the sack.

During the Senior Bowl, we saw improved play from Winfrey in nearly every facet of his game. The one area that stood out though compared to his game tape was his hand usage to shed blocks against the run as well as a pass rusher. Here against ED Ingram of LSU in the game, we see Winfrey hit the two-hand swipe move to get around the guard and blindside #17 Baily Zappe from behind for the big sack.

However, when watching a majority of Winfrey’s work as a pass rusher, plenty of his production comes via “coverage sacks” or on cleanup work rather than executing great technique as a pass rusher to shed blocks. Here later in the exhibition game, we see Winfrey initially fail at getting off the block by #54 Justin Shaffer but manages to back up off the block and locate #14 Sam Howell scrambling to his left out of the pocket and proceeds to run him down and get him to the ground on the diving tackle attempt for another sack.

When going back through Winfrey’s game tape this season, it appears that it was a tale of two players as there were glimpses of the player we saw in Mobile, but there was far more inconsistency littered throughout his tape. While Winfrey’s effort and motor are commendable, sometimes he seems a little too frantic in his movement rather than effectively executing his assignment and using his hands to stack and shed blocks. Here against the Mountaineers, we see Winfrey neutralized by the RT as he runs his feet and flails his arms but doesn’t actually do anything to get off the block.

His first step quickness can come back to bite him at times as well as he tends to try and anticipate the snap, leading to offsides penalties. Winfrey pursues with good effort but seems tight in terms of his ability to change direction and adjust in open space. He also plays upright a little more than you’d like to see for a defensive lineman as we see both tendencies here where Winfrey gets in position facing the QB but rounds the corner as the QB gets outside of him rather than moving laterally to keep outside contain, allowing the passer to get around him and pick up yards with his legs.

Winfrey is effective at shooting gaps but can struggle when asked to anchor at the point of attack against the run. He just doesn’t have to lower body strength and mass to hold his own against powerful run blockers or double team blocks up the middle. Watch this run play against West Virginia where Winfrey gets blown off the ball against the double team block, failing to sit down as he gets tall and lunges into the block, allowing the offensive line to surge forward for the first down.

Here is another example versus Texas where Winfrey initially does a good job at getting into the guard but gets high and upright as the lineman turns his shoulders away from the play like a turnstile, opening up a wide running lane at #5 Bijan Robinson exploits for an explosive run.

Perrion Winfrey is an interesting case study as a tweener since he has played nose tackle but lacks the size and anchor and has played as a 3-4/4-3 DE that isn’t freakishly tall and has some tightness to him as an athlete. His best fit in the league is as a gap penetrator where he can shoot gap and slant into offensive linemen, using his first step quickness and effort to his advantage.

A pro comparison that came to mind when watching Winfrey is current Houston Texans DL Ross Blacklock. Both defenders are a tad undersized for traditional DT prospects coming out and excel with their motor and quickness as gap penetrators. Blacklock also was a more disruptive than productive player coming out of TCU in the Big 12, showing flashes on tape, but lacked consistency at shedding blocks and holding his own against the run. I think Blacklock is a more limber athlete than Winfrey, and Winfrey may be a tad stronger at the point of attack, but I see both players similar in terms of having enticing traits, but need some seasoning to be effective starters at the next level.

Pittsburgh has allowed their defensive linemen to get more up field in recent seasons compared to back in the LeBeau days where they were asked to occupy blocks for the linebackers to run free and make plays. However, Winfrey profiles more as a 3-4 DE or as a 4-i in Pittsburgh’s scheme rather than as a traditional 0-tech, and his lack of anchor against the run could be a little concerning for a team needing to desperately improve in that area. Winfrey is likely better suited for more of an attacking 4-3 defense like San Francisco where their defensive lineman are allowed to pin their ears back and penetrate the LOS.

Winfrey did a great job improving his draft stock during Senior Bowl week, but still is a little raw to be expected to come in Day One as a heavy snap contributor on the interior. It will take a specific scheme fit for Winfrey to really shine and capitalize on his physical traits, but his effort and way he impacts his teammates will intrigue teams picking on Day Two.