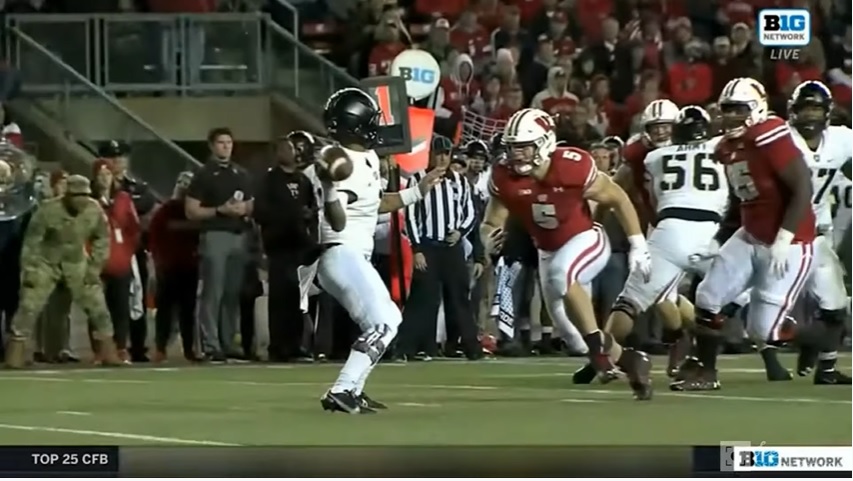 From now until the 2022 NFL Draft takes place, we hope to scout and create profiles for as many prospects as possible, examining their strengths, weaknesses, and what they can bring to an NFL franchise. These players could be potential top 10 picks, all the way down to Day 3 selections and priority undrafted free agents. Today I’ll be profiling a Big Ten linebacker with physicality and a nose for getting in the backfield.

— Size and physicality of an old school linebacker
— Attacking, downhill playing style
— Good mental processing on most run plays
— Very good tackler in gaps and in space
— Finds his way through gaps and traffic well
— Lots of plays behind the line of scrimmage
— Good blitzer and production rushing the passer

Against the run, he displays very good mental processing against power running schemes reading his keys and showing good burst to get downhill. He takes on blockers with the proper shoulder to constrict running lands and plays with very good physicality to clog the hole. On blockers coming out to him, he shows good play strength and hand placement to engage and did a solid job to disengage. He reads runs to the outside well and works well through traffic to make his way to the ball. On inside runs he has a knack for wedging himself in between blockers to get through gaps. He’s a very good tackler stopping backs in gaps with a thump or wrapping up on runners on the outside.

Vs Michigan, Chenal (5) quickly reads the pulling blockers finds a gap and gets into the backfield for a stop.

Vs Iowa, he takes an aggressive angle on the run to the outside cutting behind the left guard to make the tackle for a loss.

Vs Iowa, he is up in the A gap and will bounce off the attempted block of the right guard and makes the quick stop

At Minnesota, he remains patient, reacts quickly to fill the gap and stuffs the runner.

Against the pass, he was primarily used in Zone coverage. He displayed solid awareness on routes in front of them and coming through his areas and focuses on following the eyes of the quarterback. Good awareness and solid with his angles and positioning taking the tight end down the center of the field. He was good diagnosing screens and took good angles to the ball. As a blitzer, he was very strong particularly as a green dog making his way to the quarterback after identifying he doesn’t have coverage responsibilities. He shows good acceleration, can get through smallish gaps and finishes well. On twists and cross dog blitzes he doesn’t go through the motions aggressively trying to open up space as a penetrator and coming off the tail of his teammate as a looper.

At Purdue, here are two of his 3.5 sacks. The first he is mugging the A gap and will slip between two blockers. The second he attacks after reading his man will stay into block and gets through the TE for the sack.

On power runs his aggressiveness to the hole sometimes led to leaving the backside gap open. Against read option plays he was marginal often losing sight of the ball and chasing the fake. Attempts to go under blocks on outside runs left him clogged inside. His speed is adequate overall and will have some struggles outside the tackles. Running in space his form is upright and looks to be a bit duck footed. While dropping in Zone coverage he was limited when getting depth and lacks the closing speed to put him in position to make plays on the ball. He was better on throws in front of him than behind him. In Man coverage, he would be a liability lacking the change of direction, agility and acceleration to mirror and hang with RB/TE’s. They tried to use him as a spy against Arizona State and it didn’t go well for him.

Vs Michigan, this is one of a very few Man coverage plays and he will have the running back out of the slot and the RB easily gets separation.

At Purdue, he reads the blockers and loses sight of the ball at the mesh point chasing the play to the right when the QB still has it.

Vs Iowa, he tries to cut under a block instead of getting over the top of the tackle and they end up with two LB’s in the same hole allowing the runner to get outside.

Overall, Chenal is a physical linebacker who diagnoses well. He has good acceleration to gaps and works through traffic well to find the ball. A strong tackler with the play strength and balance to bounce off of bigger blockers and makes a lot of plays in the backfield. His timing and acceleration is good as a blitzer and has the physicality to be the penetrator on twists.

There is room for improvement when reading the mesh point and making the effort to hit the right gaps. In coverage I feel he is athletically limited with agility and change of direction and will struggle in Man and Zone.

If you like your linebackers with strength and physicality Chenal is your guy. He fits the profile of an old school Buck linebacker and there is a clip out there of him benching 225 lbs. forty times. Chenal would have to come off the field on passing downs. Pittsburgh needs more athleticism at the linebacker spot and I would hope they could find someone that can be a three down linebacker and can cover. If they miss out on the earlier more athletic linebackers I wouldn’t be shocked to see him considered. For a player comp I’ll give you Preston Brown who played primarily with Buffalo.

Games Watched: 2021 Vs Michigan, At Purdue, Vs Iowa, At Minnesota, Vs Arizona State