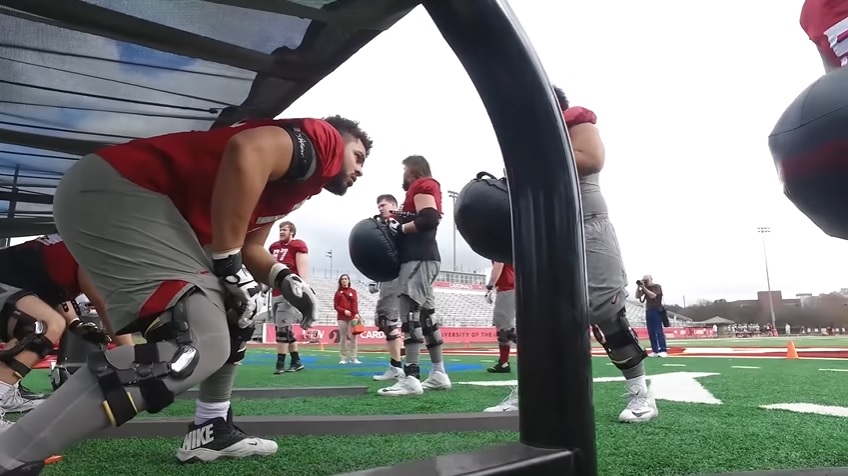 From now until the 2022 NFL Draft takes place, we hope to scout and create profiles for as many prospects as possible, examining their strengths, weaknesses, and what they can bring to an NFL franchise. These players could be potential top 10 picks, all the way down to Day 3 selections and priority undrafted free agents. Today I’ll be profiling a four-year starter at right tackle.

— Very good size and length
— Patient in his pass sets; doesn’t overreact
— Good timing placement in his punch
— Agility to slide up the arc and anchor to handle power rushers
— Good mental processing on stunts and twists
— Used in a variety of running schemes
— Good push on down/double/combo blocks; good timing to second level
— Enough agility to pull and get out on screens
— Very good hand strength to lock on to defenders
— Tons of starting experience

In a game full of imposing figures Abraham Lucas is one that stands out. He is not the biggest of the bunch but if you were to build the prototypical offensive tackle it would probably look like him. He is tall and wide with a thick lower half. Add in very good arm length and hand size and your build-a-player is complete.

As a pass blocker, he mixed up his pass sets with vertical and quick sets. In the quick set, he showed good balance and hand placement along with good short area lateral agility to mirror the defender. When using a vertical set, he displays good balance in his kick slide and did a good job to maintain a half man relationship with the rusher. He shows very good patience with his hands to not fire them too soon or reach providing good timing and strength on his punches. On rushes up the edge he uses his length and agility to ride them up the arc.

Versus inside counters he uses good mental processing, play strength and agility to cut off most moves. When he gets his hands on defenders he has very good strength and hand placement inside to lock on and control them. He is very calm in pass protection, seemingly never rattled, and reads stunts and twists well. Against power rushers he does a good job to reset his feet and hands to shut down the rush. He displays good awareness on screens and does a good job breaking down to get at least a hand on the defender which is usually enough. When helping teammates he gets a very good push on defenders to get them off balance.

At Utah, the defender gets some initial push and Lucas (72) resets his feet to drop anchor and stops the rush.

Vs California, the defense will run a twist and he gets powerful shove on the first defenders to pass him off and seamlessly picks up the looping defender.

Vs California, on a screen play he’ll fling the player to the outside and work down the seam under control to get a block for the receiver.

At Oregon, facing Kayvon Thibodeaux (5) he shows a smooth slide and good hands to mirror the rush.

As a run blocker, he was used in various running schemes. On the front side of outside runs he had solid hand placement and got a decent push. On the back side as well he uses his length and strength to push and open cutback lanes. He got solid push on down and double team blocks and showed good timing to the second level on combo blocks. Breaking down in a timely manner gave him a good chance to get his hands on linebackers.

Vs Arizona, he will chip to the inside and then pick up the linebacker and escort him to the sideline.

At Oregon, backed up in their own zone he gets a good push on the defender with some help from the right guard.

On inside runs, he displayed good strength and body positioning to open the B gap. Pull blocks were not used often but he did a nice job to locate and kick out the man on the end of the line of scrimmage. He has very good play strength at the point of attack and defenders rarely slip off of him.

At Utah, he’ll pull to the left and square up the defender on this kick out block to open up a big hole.

At Washington, he’ll lock on to the defender showing his hand and play strength to turn him to the inside and wall him off from the play.

Speed-to-power rushers have had some success getting hands into his chest and winning the leverage battle. His pass set is naturally high and he doesn’t have a lot of bend. Quick dip moves into the B gap can give him trouble. Speed in his movement is not his game. He’s more of a glider. Change of direction is marginal and could use some improvement in recognizing the most dangerous player. On one-on-one blocks you would like to see more leg drive and aggressiveness. I don’t think he would be a great fit on team that uses a lot of outside Zone runs.

At Oregon, the defender will use a quick step outside and then dip in the B gap to get in the backfield and make a stop.

At Oregon, here is a speed to power rep that will push him back to the quarterback. A rare occurrence but needs to be worked on.

Overall, Lucas has very good size and length and is a pure right tackle prospect. A combination of very good patience, hand usage, anchor and mental processing as a pass protector allow him to handle speed and power rushers well. He has experience in multiple run blocking schemes and uses his play strength, hand strength and footwork to position himself to clear running lanes. Agility and mobility are evident when pulling, climbing to the second level or getting out on screens.

Areas for improvement include handling speed to power rushers and dips into the B gap. Speed and change of direction are marginal and his aggressiveness to move defenders on base blocks could be a benefit.

If you look at the last few Steelers right tackles (Chukwuma Okorafor, Matt Feiler and Marcus Gilbert) they are all built similarly. All were around 6’6” and 320+ lbs. with two of the three having arm length at least 33 1/2 inches. It would seem they have a type. Lucas most resembles Gilbert. Okorafor is a free agent and Zach Banner is still and unknown at this point.

Lucas has a lot of starting experience and has seen just about everything. I like his poise, patience and unfazed demeanor. His best fit would be in a Gap/Power scheme with some inside Zone mixed in. With a little fine tuning I think he could be cornerstone on an offensive line. He looks ready to come in and possibly be a starter from day one.

Games Watched: 2021 – At Utah, Vs California, Vs Arizona, At Oregon, At Washington