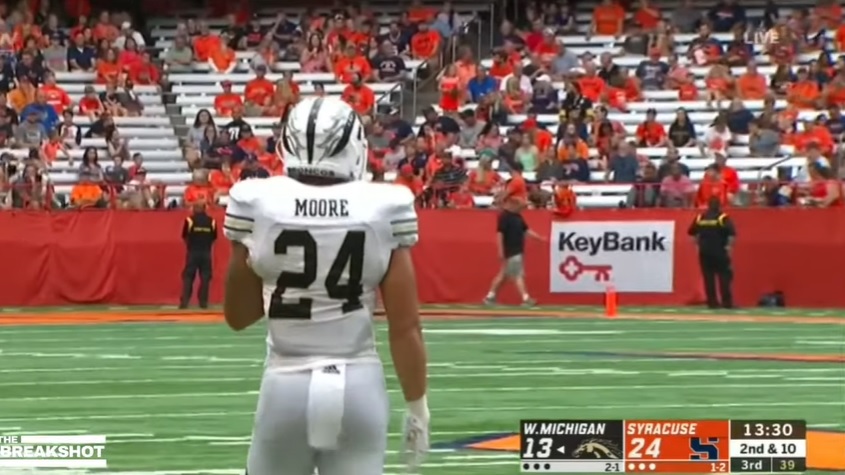 From now until the 2022 NFL Draft takes place, we hope to scout and create profiles for as many prospects as possible, examining their strengths, weaknesses, and what they can bring to an NFL franchise. These players could be potential top 10 picks, all the way down to Day 3 selections and priority undrafted free agents. Today, I’ll be profiling a wide receiver prospect that never played the position prior to college, but made his mark in just three seasons as one of more dynamic playmakers at the position with room to grow more as he heads to the pros.

— Has experience lining up in the slot as well as out on the boundary
— Explodes off the LOS on the snap of the ball, eating the defender’s cushion immediately
— Has the speed and acceleration to pull away from defenders in the open field and stack corners when going deep
— Is a smooth runner, not appearing to be running as fast as his is
— Extremely quick and twitchy when coming out of his breaks and when changing direction
— Does a good job evade press at the LOS with his quickness and my slapping the defender’s hands down
— Effective when running slant and crossing routes because of his ability to slip pass defenders when creating separation
— Is a legit weapon after the catch in space with his speed and ability to make defenders miss
— Has the ability to control his body and high-point the football for a smaller frame
— Has the contact balance to bounce off body shots and fight for extra yards after the catch
— Has experience being used on jet sweeps and pop passes
— Converted to WR only three years ago, suggesting he has more room to grow
— Fiery competitor that plays with passion and high effort on every snap
— Is a willing blocker that has no problem sticking his face in the fan

— Undersized for the position when compared to other typical boundary receivers
— Can struggle to get off press when long, physical corners get a hand on him
— Can be more consistent stacking corners vertically down the field on deep shots
— Doesn’t have the ideal length and catch radius to bring in difficult passes outside of his frame or through contact
— May be willing, but won’t be much of an asset as a run blocker on the outside due to lack of size and strength
— Has the skill set, but minimal production as a kick/punt returner

— Redshirt Sophomore prospect from New Kensington, PA
— Born September 10, 2000 (Age 21)
—  3-star recruit out of Shady Side Academy in Pittsburgh, Pennsylvania
— Played defensive back and quarterback in high school, being named Allegheny Conference Offensive Player of the Yea twice, and was also named Defensive Player of the Year
— Also played basketball, earning all section honors as a point guard junior and senior years
— First team All-MAC selection as a true freshman while he played in all 13 games and started the final 12 and caught 51 passes for 802 yards (15.7 YPR) and three TDs with one carry for two yards and a score
— Played in five of six games during the pandemic-shortened season in 2020 and finished the year with 25 catches for 388 yards (15.5 YPR) and three TDs
— Enjoyed a breakout campaign in 2021, playing and starting in 12 games and recorded 94 receptions for 1,283 yards (13.6 YPR) and ten TDs along with one carry for ten yards
— Business major
— First team All-MAC in 2019 and 2021

Skyy Moore came to Western Michigan as a CB recruit after starring at Shady Side Academy just outside of Pittsburgh, playing QB and DB while being recognized as one of the best players in the area. However, when he got to Kalamazoo, he never saw the defensive side of the field and instead moved to wide receiver for the first time in his football career.

The move proved to be the right one as Moore immediately became a dynamic playmaker for the Bronco offense, earning an All-MAC selection as a true freshman before breaking out all over the place in 2021, prompting him to declare for the 2022 NFL Draft. When you watch Moore, you see a quick, twitchy athlete that generates separation with ease against defensive backs. He has great footwork and can get defenders on their toes, and he comes out of his breaks. Watch this TD catch against Northern Illinois where Moore hits the hard jab step right before quickly coming back inside on the slant, turning the defender around for the easy walk-in score.

Moore explodes off the line once the ball is snapped, immediately eating the cushion of the defender tasked with covering him, thus putting him in a panic. Moore understands how to use leverage in his routes and to use the defender’s body and weight transfer against him like we see on this long catch-and-run score against the Panthers. Moore gives the defender a shoulder shimmy after an outside jab step, getting to corner to turn his shoulder as he breaks inside and works through the contact, noticing the defender is trying to use him to stay upright for balance and turns back to the ball, resulting in the defender falling on his face and Moore getting green grass for the long TD run.

Watch this play with Moore in the slot at the bottom of your screen and his burst off the LOS on the snap, freezing the defender’s feet in anticipation as he breaks inside catching the ball and immediately taking contact by the safety and corner trailing from behind, holding onto the ball and moving the chains for the first down.

Moore doesn’t appear to be moving too fast when running down the field, yet he seems to always be pulling away from coverage or defenders in pursuit. Watch this slot fade where Moore successfully stacks the defender and pulls away from him in coverage, getting several steps of separation and catches the pass with outstretched arms to the walk-in score.

For being a smaller receiver, Moore does a fantastic job of working off press man coverage when on the LOS. Here against the Huskies, we see Moore line up outside and manages to hand fight the corner tasked with covering him, shedding the jam attempt and gets an inside release for the easy completion over the middle that Moore catches and turns up field for an explosive play before the defender drags him down from behind.

Here is another example from the same game just a couple plays later where the offense goes back to Moore on a similar concept, quickly breaking inside while swiping down the defender’s hands, catching the ball in-stride with the defender leaping in attempt to deflect the pass and proceeds to run the rest of the way to pay dirt.

Moore not only wins on in-breaking routes and vertically down the field, but he also can win outside on comebacks and quick out routes. He may not seem physically imposing but he is a legit YAC threat both as an elusive runner as well as playing through contact. Watch this catch where Moore comes back to the ball by dropping his shoulders and hips, catching it manages to stay upright as one defender tries to drag him down and continues to run up the sideline until another defender shoves him out of bounds.

His physical stature also prevents him from being a dominant blocker in the run game, but Moore plays with the want-to and desire to put a hat on a defender to help out his teammates. Watch this example where Moore recognizes the draw give to the back and engages the defender with knees bent and hands inside his chest, holding his block and gets the defender on the ground to spring the runner for a successful run.

Despite Moore’s lack of ideal size and length to be a jump ball specialist, he does win a fair amount when having to catch through contact. Watch Moore on this slot fade on the right side of the formation where he gets a step on the defender in coverage but has to work back to the ball that is thrown a little low and outside. He maintains focus on the ball and battles through contact as he catches the pass while falling to the ground, securing the grab for the impressive TD in tight coverage.

Still, as I mentioned earlier, Moore isn’t a guy that is going to consistently win the jump ball against long, athletic corners at the next level due to a lack of size and length like we see on this missed jump ball attempt against Northern Illinois.

Initially when I watch Moore, Seahawks WR Tyler Lockett came to mind as a slightly undersized WR with a similar skill set. However, after watching more tape and having a friend recommend another potential comp, I fell on Golden Tate as a near-identical pro comparison for Moore. Moore and Tate have near identical size and measurables and are fast, explosive receivers that excel at crating separation and getting YAC. I would argue Tate is a tad more physical than Moore, but Moore makes up for it by being a little better at separating in his breaks that Tate coming out. Both players have a fiery personality as a competitor and play bigger and more physical than their listed size suggests.

Tate ended up getting drafted at the end of the second round back in 2010, and I honestly think Moore deserves consideration at the Round 2-3 turn. He is extremely dynamic both before and after the catch, being a nightmare for CBs to cover as he attacks their toes and creates separation so easily over the middle. He may not be a “contested catch guy”, but Moore wins his fair share of catches when a defender is on him whether that be in tight coverage or going up and getting the ball in the air. His speed/quickness combination make him a legit weapon both in the slot as well as on the outside being so difficult for defenders to jam at the LOS.

Pittsburgh is looking for a receiver that can stretch the field vertically as well as a potential replacement in the slot should they eventually lose JuJu Smith-Schuster to free agency. In the case of Moore, you get a receiver that can play both roles in an offense that can scheme up matchups for him inside, outside, and even on jet sweeps and pop passes which he showed he can do at Western Michigan. Being a Pittsburgh native and a MAC receiver, you must imagine the Steelers will at least give him a long look this spring given his traits and upside for continued growth as a pro.

If I were a betting man, I’d wager Moore will be a player Pittsburgh will have circled on their draft board in the middle rounds come the 2022 NFL Draft.