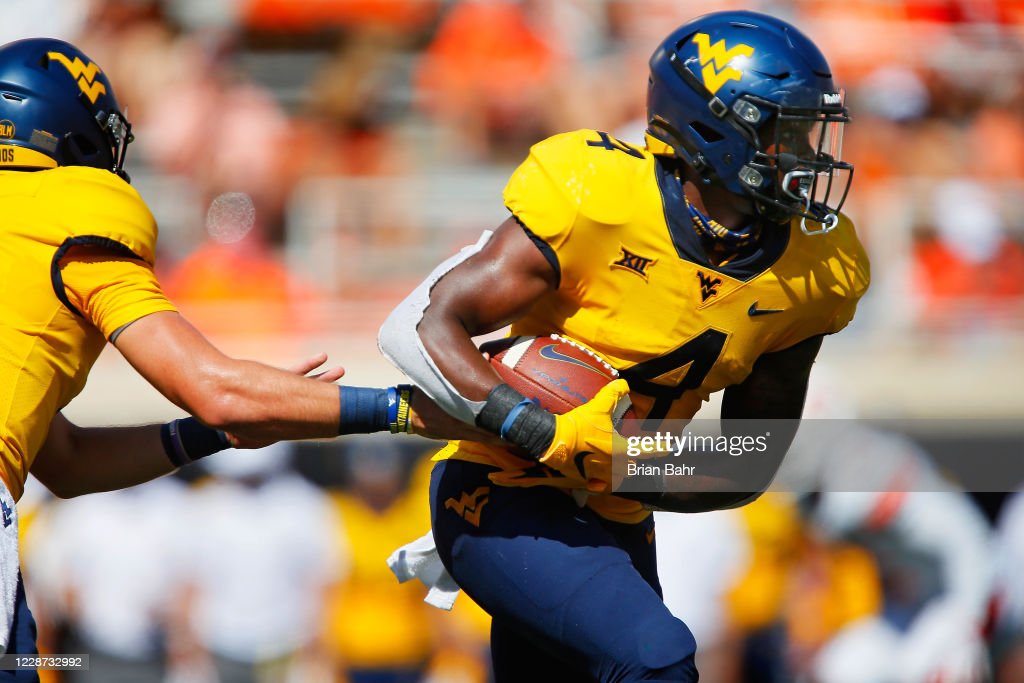 From now until the 2022 NFL Draft takes place, we hope to scout and create profiles for as many prospects as possible, examining their strengths, weaknesses, and what they can bring to an NFL franchise. These players could be potential top 10 picks, all the way down to Day 3 selections and priority undrafted free agents. Today, I’ll be profiling West Virginia RB Leddie Brown.

— Plus size, a bit high-cut but fills out frame well, big back who looks like he can carry the load with good hand size
— No-nonsense runner, plays to his style, runs North/South and doesn’t dance around
— Good sense for where the marker/end zone is, does well in short-yardage situations
— Shows lower body strength and ability to run through low arm tackles
— Finishes runs with leg drive and adequate power
— Runs with good pad level and doesn’t play too tall despite his unusual height
— Shows decent lateral agility to cut down a gap
— Soft hands, plucks the ball away from his body and an asset in the pass game for checkdowns/screens
— Willing to square up in pass pro with good size to anchor
— Productive runner who put up solid numbers the last two seasons

— Not a dynamic runner who doesn’t have much wiggle
— Average speed, not slow but lacks great burst or second gear in open field
— Runs through and not around, able to run through contact but slows him down
— Able to move pile and run through low tackles but doesn’t have elite contact balance to stay on feet once he loses his balance
— Stiff runner overall with tight hips/ankles
— Isn’t a nuanced route runner, occasionally split out but ran a basic route tree who lacks burst or change-of-direction
— May be scheme-limited at NFL level to man/gap run schemes as opposed to zone
— Pedestrian career YPC average relative to college game, senior season wasn’t dramatically better than his junior year and arguably was worse

Brown was the final pick in my initial Steelers’ mock draft, so it was worth dedicating a full report to him. He’s a good-sized running back. Don’t see many guys 6’0+, 200+ pounds in a draft class. And Brown plays to his, a strong downhill runner who isn’t a bruiser but doesn’t dance and can push the pile forward. Here’s a great example of that leg drive and finish.

Brown’s size also helps in more open-field settings. He’s able to break low arm tackles with ease thanks to his bigger legs and power he runs with.

I also like his well-roundedness. He’s caught nearly 70 passes the last two years with West Virginia and it shows up on tape. He plucks the ball naturally and away from his body and will be an asset as an underneath checkdown.

The negatives on his tape are a little harder to show. Some of it is simply what I don’t see. In the pass game, he isn’t a nuanced or great route runner despite his solid pair of hands. And Brown isn’t very dynamic. He runs through tackles, not around, and lacks great burst to the corner or great agility to shake defenders in the open field. His speed is average to a tick above, he did have a nice 80-yard TD against Virginia Tech this year and ran away from the final DB the last 30 yards, but I would not call Brown an explosive runner.

He’s stiff overall. Even check that last catch along the right sideline against Maryland in the above GIF. Nice hands catch but he can’t turn upfield and loses his balance before regaining his feet, unable to maximize his YAC.

Brown is solid, sturdy, with some power and hands but isn’t a “wow” runner. Which, to be fair, isn’t the worst thing. Not every back has to be the next Barry Sanders.

Overall, Brown is a fine NFL prospect. That lack of big-play ability will hurt his upside, but I think he has staying power in the league. He, similar to Benny Snell, will need to have to cut his teeth on special teams and make an impact there but his frame should give him a chance to go run down kicks. My NFL comp is something along the lines of a Jay Ajayi with the upside of a third-down back like Chester Taylor.