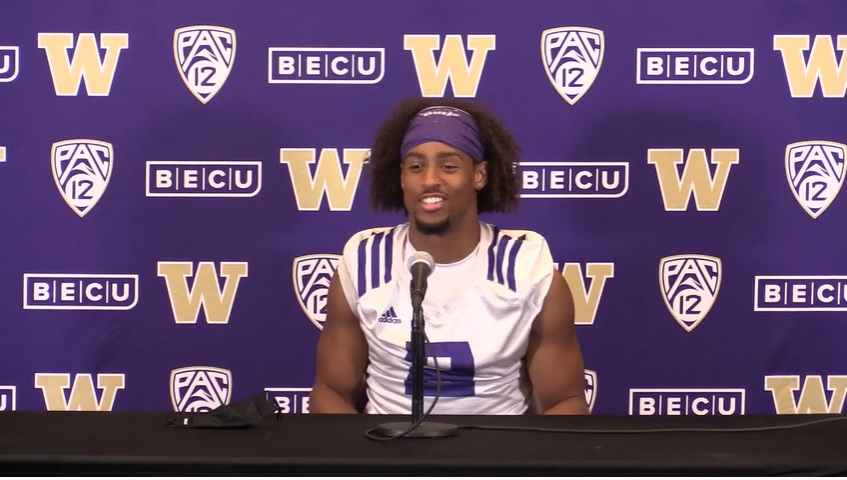 From now until the 2022 NFL Draft takes place, we hope to scout and create profiles for as many prospects as possible, examining their strengths, weaknesses, and what they can bring to an NFL franchise. These players could be potential top 10 picks, all the way down to Day 3 selections and priority undrafted free agents. Today, I’ll be profiling Washington CB Kyler Gordon.

— Does a good job of working to stay square at the line of scrimmage in press coverage, consistently forces disrupted wide releases
— Solid frame for the position, very similar in frame to longtime Steeler Joe Haden
— Excelled on special teams at Washington, suggests that he could produce immediately in that facet
— Extremely willing as a run defender/effective blitzer off the edge
— Has some of the quickest feet in the draft, mirrors receivers effortlessly in press coverage, allowing him to stay on the upfield shoulder
— Extremely effective working in press bail
— Positional versatility: has experience both on boundary and in slot at Washington
— Extremely effective as an open field tackler, closes space, approaches ball carriers under control, engages with proper technique and desired physicality
— Has plenty of experience guarding tight ends at the collegiate level, should help him transition to the next level where tight ends align all over the formation
— Appears to play faster than his 40 time on tape, has hawked multiple running backs coming from the boundary to prevent explosive play touchdowns
— Has flexible hips/is able to open and transition fluidly and efficiently
— Can effectively press both slot receivers and tight ends on the inside, helping his transition toward becoming an inside/outside capable cornerback at the next level(much like Cam Sutton in that respect)

— Just average long speed(4.52 40 time), not bad, just not elite for his size
— Only one season of full, 12 game starting experience
—Will occasionally struggle combating subtle push offs by wide receivers at the top of their routes, allowing separation at the catch point
— Will occasionally take a false step when opening to break on in breaking routes
— Will occasionally open hips early in off coverage, allowing receivers to generate separation coming across his face
— Will take too many steps getting out of his breaks at times, worst best when able to plant and change direction efficiently

In the ongoing debate of which school can truly claim the “DBU” mantra, few FBS schools can rival the recent production of the University of Washington at the cornerback and safety positions. Since just 2015, the Huskies program has produced Pro-Bowl defensive backs in Marcus Peters and Budda Baker, along with talented draft picks in Kevin King, Sidney Jones, Byron Murphy, Taylor Rapp, and Jordan Miller.

After producing a third round pick in Elijah Molden and a fifth round pick in Keith Taylor in the 2021 NFL Draft, the Huskies once again field a pair of talented cornerback prospects in the 2022 draft crop in Trent McDuffie and Kyler Gordon. While McDuffie has notably garnered first round buzz from many in the media, Kyler Gordon quietly accumulated career highs in both interceptions and pass breakups, with two and seven respectively this past season. Moreover, along with his teammate in McDuffie, Gordon helped form the most physical cornerback tandem in the nation, finishing this past season as a First Team All Pac-12 recipient at the position.

With some of the quickest feet in the draft, Kyler Gordon is able to stay square with ease and challenge impede receivers at the line of scrimmage with an unmatched mirror press, forcing receivers off their path without needing to shoot his hands. Below, in a 2019 matchup against Cal, Gordon aligns in press coverage to the field side, patiently giving ground off the snap while staying square. Once the receiver breaks in on the slant, Gordon closes to contact the upfield shoulder, flattening the receivers route with physicality, and ultimately working to undercut the route and securing a pass breakup on the overthrown pass.

Below, from a 2020 matchup against Utah, Gordon is once again aligned in press coverage to the field side, once again patiently giving ground while working to stay square and mirror the receivers inside release before, closing to the near hip and staying in phase with the receiver downfield.

As the receiver begins to settle on the hashes, Gordon throttles down and changes direction effortlessly to stay in phase, break downhill, and play through the pocket to break up the curl route. His quick feet and change of direction ability are his two best coverage traits, and allow him to suffocate receivers in press coverage despite possessing average long speed.

If Joe Haden is not retained this offseason, the Steelers will undoubtedly need to replace his physicality in the run game. At Washington, Kyler Gordon proved not only to be an elite open field tackler, but also an effective defender within the box, with the Huskies blitzing him off the edge both from the boundary and the Nickel position. Below, aligned on the line of scrimmage, outside of the tight end in the boundary. At the snap, Gordon works to gain width laterally before diagnosing the jet sweep and triggering downhill.

After closing ground downhill, Gordon meets the ball carrier behind the line of scrimmage, shooting low and getting his head on the nose of the football, jarring the ball free and creating a timely turnover for the Huskies. Where most cornerbacks are content to make this tackle for a gain of two or three yards, Gordon’s downhill mentality to close space and stick the ball carrier before he could cut upfield is notable here.

After posting an average 4.52 time in the 40 yard dash, I was surprised to find that Gordon’s game speed appears much faster than his test time. On the rep below, from this past season against Oregon, Gordon accelerates from a dead stop to hawk the Oregon running back short of the end zone, delivering a physical stick at the point of contact.

Gordon’s awareness, short area quickness, and anticipation skills largely make his lack of top level long speed a non issue. Moreover, as shown in this clip, he is inarguably one of the best open field tackler’s at his position in the 2022 draft.

I have often referenced the importance of a Cover 3 cornerbacks ability to slow down their tempo in their bail technique to contest both intermediate routes and short access routes, intended to hit the soft spots of the coverage. While his press man work is extremely impressive, Gordon’s ability to transition seamlessly into press bail technique allows him to effectively disguise his assignment pre snap, and complicate opposing quarterbacks post snap reads.

Aligned in press coverage against a stack formation to the field side, at the snap Gordon opens into a crossover run, dropping to the deep 1/3, before settling at seven yards depth, diagnosing a quick game throw and triggering to the flat. Upon arrival, Gordon shoots low with proper leverage to stop the back in his tracks, limiting the catch to a short gain and allowing no room for yards after the catch. Note, Gordon’s ability to quickly gain the proper depth in his press bail allowed him to settle, diagnose the action in front of him, and come downhill to make the stop before the back could turn the corner and fight for yards after the catch.

As I had previously touched upon, I tend not to believe that Gordon’s average long speed will present issues in the league as his superior technique prevents him from getting into straight line foot races with opposing receivers. Below, in a 2019 matchup against Cal, Gordon aligns in press man coverage with the receiver in a cut split inside the numbers. At the snap, Gordon forces the receiver wide with a two handed jam before working to recover from a trailing position.

Throughout the rep, Gordon works to frustrate the receiver with some hand fighting, preventing the receiver from stacking him and ultimately squeezing the receiver well outside of the numbers and toward the sideline. Subtle veteran technical tricks allow players like Kyler Gordon to compensate when they are outmatched against a speedy receiver by taking the receiver off of their path and forcing the quarterback to make a perfect throw. Regardless of their speed, no good cornerback is going to win by engaging in foot races with opposing receivers on a consistent basis.

Other than the lack of a top level ceiling like the draft’s top prospects in Sauce Gardner and Derek Stingley, it is extremely tough to find warts in Kyler Gordon’s game, as he is such a well rounded and technically refined player. The one subtle flaw I was able to uncover was that despite his borderline elite change of direction skills, Gordon will occasionally take too many short, choppy steps coming when breaking out of a crossover run, limiting his ability to immediately close ground downfield. That being said, this is a minor issue that can easily be refined at the next level with some hands-on work with NFL level coaching staffs ahead of his rookie campaign.

Overall, I came away from evaluation of Kyler Gordon extremely intrigued with his ability to be an instant impact starter at the next level. While he is more than capable working in both press man coverage and press bail in Cover 3 zone assignments on the boundary, his experience in covering tight ends and slot receivers on the inside effectively makes him arguably the most versatile cornerback in the class. Finally, Gordon is undoubtedly one of the best open field tacklers at the position, and his ability and willingness to get involved in the run game and blitz off the edge could make him a perfect fit in Pittsburgh, where he could play on the boundary in base and help fill the Mike Hilton void in sub packages.

If selected in Pittsburgh, depending on how the cornerback room shapes up after free agency, Gordon could compete for Week 1 snaps in the slot before assuming a larger role as the season progresses. Immediately, he would make their defense far more versatile both in their ability to match talented receivers across the formation, as well as allowing the team to effectively defend the run against teams who operate primarily out of 11 personnel, namely the reigning division champs in Cincinnati. In watching Gordon’s tape, I couldn’t help but see shades of a younger Joe Haden, both in his ability to stay square and challenge receivers in press coverage due to superior foot quickness, as well as his willingness and effectiveness both as an open field tackler and ability to defend the run in the box.

Beyond his defensive contributions, Gordon was twice named special teams player of the year by the Huskies staff, and could immediately come in and contribute effectively on multiple units. If he lands in Pittsburgh, Gordon could immediately provide the Steelers with another effective man coverage defender, as well as a capable blitzer off the edge, allowing the team to rediscover the 2020 and 2019 successes of their single high centric scheme. Regardless of where he lands, Kyler Gordon provides the coveted versatility that NFL defensive coordinators are clamoring over, and has a chance to become an impact player as early as his first season.