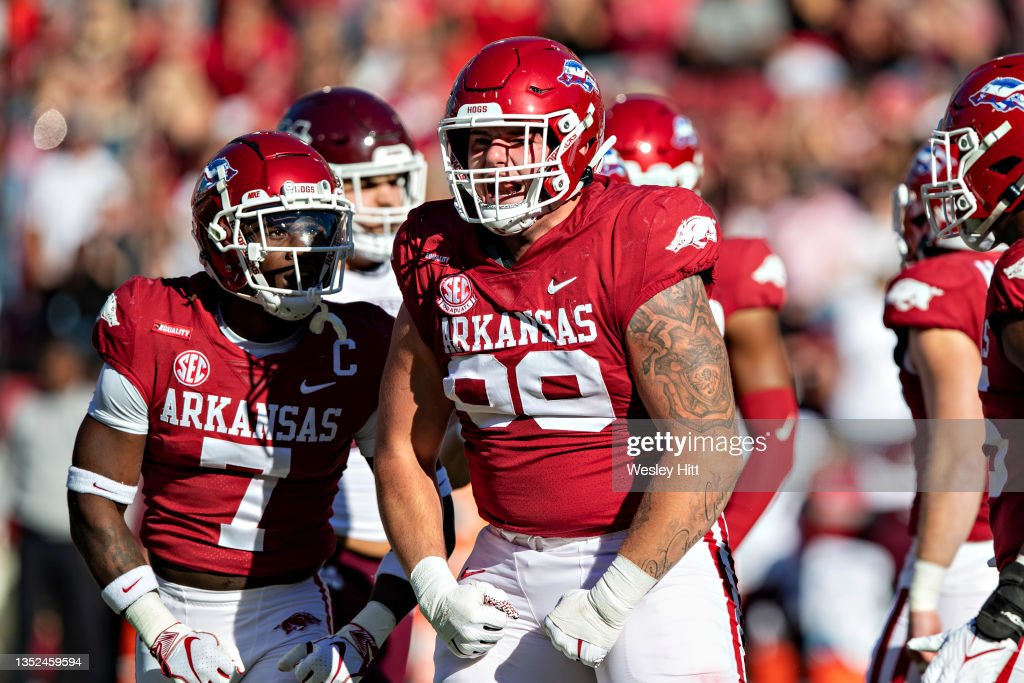 From now until the 2022 NFL Draft takes place, we hope to scout and create profiles for as many prospects as possible, examining their strengths, weaknesses, and what they can bring to an NFL franchise. These players could be potential top 10 picks, all the way down to Day 3 selections and priority undrafted free agents. Today I’ll be profiling a defensive lineman with a ton of starting experience and impressive strength.

After three years as a starter in the Missouri Valley Conference, Ridgeway transferred to the SEC for his senior year. The vast majority of his playing time was spent as a rotational player at the 0/1 technique and he has impressive size and strength.

As a run defender, he has solid snap quickness, pad level and very good hand placement. The majority of his snaps were as the nose guard but he had a handful at the 3 tech and one at the 5 tech in the games watched. He consistently is able to use his very good strength to press the center to stand him up. Solidly effective as a two gap defender to shed blocks using good hand strength to move aside the blocker to make plays in his immediate gaps. When he stays square with hands on the blocker he has solid lateral agility to maintain a good position to move with the blocker. He is a solid tackler within his gaps using his length to wrap up runners.

Vs Texas, Ridgeway (99) will give up some ground laterally versus the combo block but when the RB cuts back his way he is able to shed and make the tackle

At Georgia, down in the red zone he uses his strength to shed the center and clog up the middle of the line to make a nice play.

At Georgia, he shows his strength, leverage and hand placement to stand up the blocker and get in on the play.

On passing downs, if you ask him to stay low and drive the center into the pocket he can have solid success with good leverage and leg drive. He is a straight line power rusher and will get his hands up in passing lanes.

Vs Texas, this was easily his best pass rush I saw. Good push in the pocket, able to shed and make the tackle.

Vs Texas A&M, a similar rush pushing the center back into the pocket. Nice when it worked early in the season but became less effective later.

Marginal mental processing reading blocks and once an offensive lineman gets in good position on solo blocks he struggles to get over those blocks. He fails to recognize blocks coming from his sides and position himself to handle them. Keeping his eyes on the ball was inconsistent especially when dealing with combo and double team blocks. Against those blocks he was marginal holding his ground to clog the running lanes and must play with better pad level. His foot speed and change of direction are limited and doesn’t make many plays outside his gaps. He doesn’t show the quickness to shoot gaps to play in a one gap scheme. There is a lot of stiffness in his frame.

At Ole Miss, he is over the center and will face a double team block and be driven well out of the play.

At Alabama, facing a combo block he can hold his ground and is pushed off his mark.

As a pass rusher he is severely limited. After two or three steps his rush stops and he lacks a consistent effort to counter. He’ll try to get skinny into gaps, clubs and swims but they were unsuccessful and will open up or turn his body allowing him to be driven out by blockers. Chasing out of the pocket is hindered by marginal COD, speed and acceleration.

Vs Texas, this is an example of most pass rushes and how they stall after a few steps.

At Ole Miss, an example of him trying to use his hands when pass rushing. He’ll try to swipe the hands of the center and then a rip that is ineffective and leaves him with his back to the blocker.

Ridgeway has very good size and strength and a lot of experience. He plays mostly with good pad level, hand placement and play strength against the run and fits in a two gap scheme. Plays are made within his gaps by standing up and shedding blockers. Against the pass, he has some success with a straight line rush to collapse the pocket.

Athletically he is limited with below average change of direction, speed and acceleration. Areas of improvement include reading and countering blocks, pad level and anchor vs double team blocks and adding to his pass rush plan.

Though he played primarily over the center his size and length may have Pittsburgh potential interested in him as a 5 tech defensive end. That being said for a defense that lacked speed and athleticism in 2020 this player would not improve the defense in that area. He looks like a reserve/developmental player who would come out on passing downs. For player comps I’ll give you Tedarrell Slaton and John Atkins.