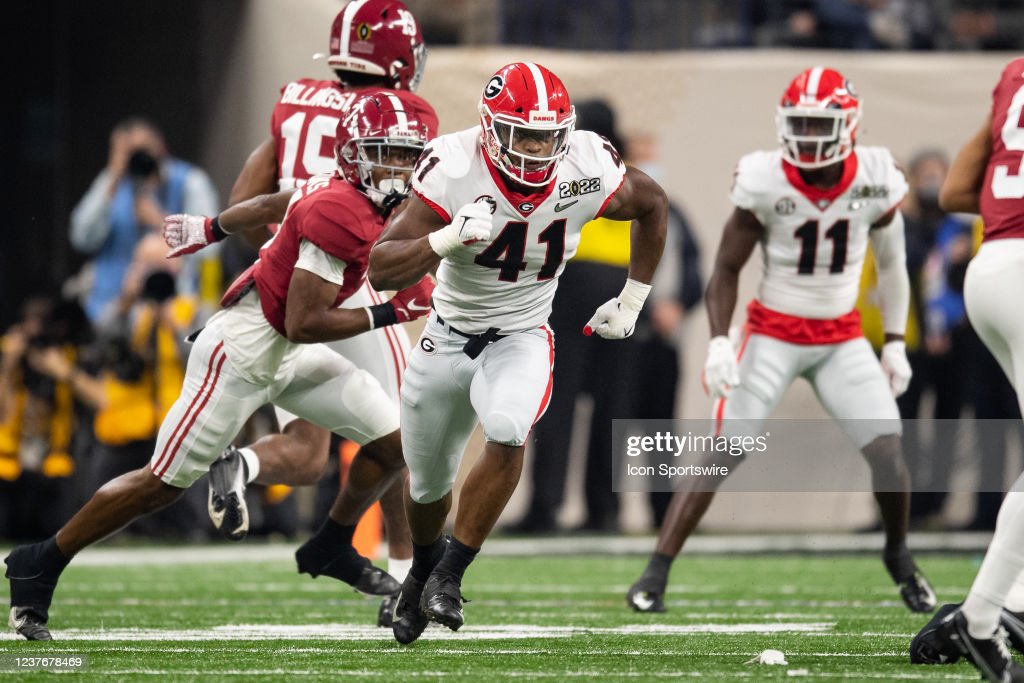 From now until the 2022 NFL Draft takes place, we hope to scout and create profiles for as many prospects as possible, examining their strengths, weaknesses, and what they can bring to an NFL franchise. These players could be potential top 10 picks, all the way down to Day 3 selections and priority undrafted free agents. Today, I’ll be profiling a prospect who seems to be getting lost in the wash that is the Georgia Bulldogs’ defense in senior inside linebacker Channing Tindall.

— Consistently finds himself around the football; always in or near the pile on film
—Above-average diagnosing skills, especially against the run
—Great overall click-and-close abilities; shot out of a cannon once he diagnoses and fires
—Impressive initial burst with good range overall; will rarely be beaten to the spot
—Adequate take-on abilities with a quick pop from his hands; displayed ability to slip blocks at times and stay clean overall
—Sound, technical tackler that rarely misses; plays much bigger than frame leads you to believe
—High-level football IQ overall
—Motor that truly runs hot; constantly barking out instructions to teammates, pointing out plays before they happen

—Can be fooled overall with misdirection; good thing is when he makes mistakes he goes 100 MPH
—Thrived behind an elite-level defensive line in college featuring a number of potential first-round draft picks
—Late bloom that took until senior year to see playing time at Georgia
—Lacks pass rush plan when asked to play on the edge
—Appears uncomfortable dropping into space in zone coverage and occasionally has heavy feet in zone
—Long, lanky frame that feels maxed out overall physically
—Tended to disappear at times on tape in the SEC

For teams in need of an athletic, sideline-to-sideline linebacker that can do it all, the 2022 NFL Draft certainly offers plenty of tremendous value after the first round of the draft after names like Georgia’s Nakobe Dean, Utah’s Devin Lloyd, and possibly Wyoming’s Chad Muma come off the board.

One of those names that could provide a team with a ton of value and a bunch of upside happens to be Dean’s teammate at Georgia in senior linebacker Channing Tindall, a big, fast, physical freak that comes with light wear and tear on his treads, but with some impressive tape to show just how talented he truly is.

When it comes to Georgia’s defense from this past season, Tindall gets lost in the wash. Quietly, Tindall may have been the best athlete at linebacker for the National Champion Bulldogs, earning a higher Relative Athletic Score than both Dean and Quay Walker.

On tape, Tindall looks like the new-age linebacker against the run, showing off a quick-twitch burst to knife underneath and around blocks to make plays on the ball carrier, while also having the strength to take on blocks, shed and make a play. That doesn’t even begin to mention his sideline-to-sideline speed, making him a potential every-down linebacker in the NFL.

Right away on tape, his long speed and agility are quite evident.

Check out the way he closes ground here on Alabama’s Bryce Young in the College Football National Championship, sacking Young for a big loss in a pivotal spot in the red zone.

He’s as quick-twitch as they come at the position. That initial burst forward allows him to completely blow past the Crimson Tide blocker, giving him a lane directly to Young. He’s like a shark that smells blood in the water when he finds the football and fires downhill. He’s truly relentless and his closing speed is eye-popping.

The thing that really sticks out on tape with Tindall is his overall range. When he opens it up, he flys sideline to sideline. It’s remarkable to see.

Watch the initial first step here against Tennessee — which was by far his best game of the 2021 season. Once he reads the RPO and sees it’s a bubble screen to his right, he’s able to turn, plant and fire across the field, chasing down the play for the impressive tackle along the sideline.

Plays like this showed up constantly on Tindall’s tape. When he’s really able to open it up you’re going to be hard-pressed to beat him in a foot race to any spot.

Tindall is much better playing downhill against the run and roaming sideline to sideline using his speed and overall insane athleticism, rather than dropping into space in zone coverage or handling man responsibilities. That’s simply not his game. He can handle zone drops just fine and uses his eyes well to read the play, but he just appears uncomfortable and would rather be coming downhill hunting.

Though he has some length concerns at his size, which can lead to issues taking on blockers, he did a fine job of that on tape, including an impressive rep against South Carolina last season, using his strength to stunt the Gamecocks’ guard down to one knee before then shedding and making a play at the line of scrimmage.

He’s also very patient when playing the run and uses his eyes well to find the football in key spots. Here against South Carolina, watch the patience to not attack the initial hole before then showing off the burst and overall closing speed to get into the next hole, making the play for a short gain on the ground.

He also flashed some serious abilities as a blitzer in Georgia’s defense, recording 5.5 sacks last season in a reserve role. While he doesn’t have much of a toolbox when it comes to actual rush moves, he showed off a nice shoulder dip and bend on a blitz against Tennessee, reducing his strike area, allowing him to get to the quarterback unimpeded.

Overall, Tindall is quite the player that fits today’s game. He’s an athletic freak that tested off the charts at the 2022 NFL Scouting Combine. Though he was a bit of a late bloomer at Georgia in a historic defense at the college football level, the tape in 2021 speaks for itself, especially from a traits perspective. I believe he can handle a three-down linebacker role in a 3-4 defense as either a BUCK or a MACK thanks to his size, strength and overall athleticism.

He would be most impactful as a BUCK due to his abilities against the run, and as a blitzer with his agility and athleticism. He’s a sound tackler, one that uses solid technique when he arrives, and was lauded as a great communicator while at Georgia.

Though he’s not up there with the big names at the inside linebacker position in the 2022 NFL Draft, Tindall will provide great value right away for whichever team decides to wait on the position for a few rounds. He’s everything you’re looking for in a modern linebacker at half the price.

Games Watched: 2021: vs. Clemson, vs. UAB, vs. South Carolina, vs. Arkansas, vs. Auburn, vs. Kentucky, vs. Tennessee, vs. Alabama (CFP Championship Game)