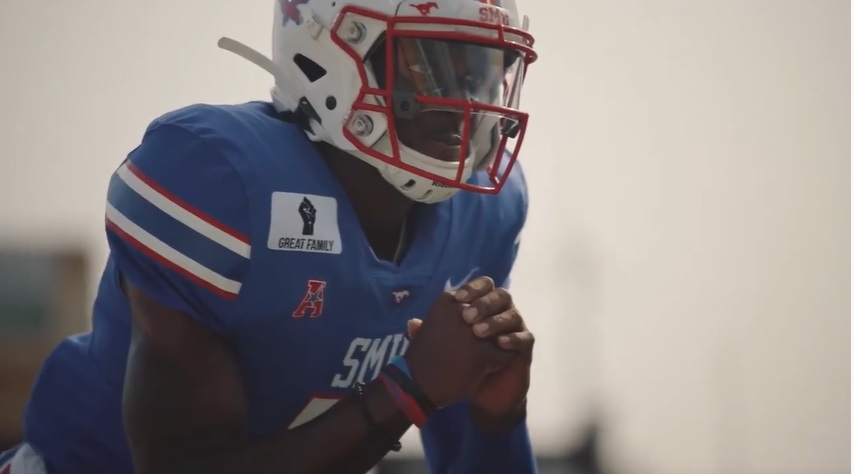 From now until the 2022 NFL Draft takes place, we hope to scout and create profiles for as many prospects as possible, examining their strengths, weaknesses, and what they can bring to an NFL franchise. These players could be potential top 10 picks, all the way down to Day 3 selections and priority undrafted free agents. Today I’ll be profiling a speedy receiver out of the American Athletic Conference.

— Marginal hands away from body, prefers to body catch leading to bobbles/drops
— Decelerates on intermediate in/out routes after break
— Adequate play strength and can get jammed up going through Zones
— Doesn’t break many tackles
— Most receptions were on limited number of route types
— Route running has room to improve
— Hip drop on comeback routes doesn’t create enough space
— Positioning /play strength when blocking is marginal

Danny Gray is a receiver who played primarily on the outside and occasionally in the slot. The majority of the time he lined up on the right side and was rarely used in motion. Along with Reggie Roberson he formed a solid receiving duo with Gray being the speedier of the two.

As a receiver, Gray was used on a variety of routes on all three levels. The majority of his targets in the games watch came on comeback, screen, slant and go routes. Against off coverage he has good acceleration of the line of scrimmage the speed to stack defensive backs. On the short level he was used on screens, shallow crosses and slants and is solid creating after the catch. He ran in and out routes on the intermediate levels and all of the deep routes.

At Louisiana Tech, Gray (5) will take the screen pass, get outside and show off his acceleration.

At Louisiana Tech, he uses his hands well within the route, speed to get on top and make a nice catch over the shoulder while getting a foot down.

To create separation he displays quickness at the breakpoint and is solid manipulating defensive backs on deeper routes to get them to turn their hips or get in their blind spot. On deep routes, he has the acceleration to run by defenders within the route. Against Press coverage, he uses quickness and solid hand usage to avoid the jam and within the route. He has good mental processing to find the soft spots in Zones and work with the quarterback on scramble drills. In space he works back to the ball to shorten the space between him and the ball.

Here are a couple routes where he does not get the ball. The first shows him using his hands and speed to get over the top. They second clip shows subtle movements to manipulate the DB to get in good position.

At Houston, he works well with the quarterback to take advantage of the free play and connect on a back shoulder throw.

He is solid adjusting for throws up and down, has good body control near the sidelines and tracks the ball very well on deep throws. I didn’t see many contested catch situations but he was solid in the few I saw. After the catch he can create in space and has the speed to take it the distance. He didn’t have many carries on jet sweeps but shows patience to use his blocks and had a very good yard per carry average. He is a willing blocker on the outside and downfield.

At Louisiana Tech, from the slot at the bottom he takes the jet sweep and shows patience to use his blocks and finish forward for eight yards.

At TCU, from the top of the screen he run a route inside, take a short throw and turn it into a long gain.

At Memphis, here is another deep ball he tracks nicely over his shoulder for a score.

Gray does not show a lot of trust in his hands and prefers to make body catches whenever possible. On inside and outside breaking routes he decelerates out of his break negating his speed. Physical defenders can make comeback routes difficult and jam him up in Zone coverage and he has adequate physicality to break tackles so adding play strength would be beneficial. He could improve his hip drop to create more space on comeback/curl routes. When blocking he needs to put himself in better position between the defender and the ball.

Vs Houston, he’ll run a slant at the top. It’s subtle but after he breaks inside he decelerates and then bobbles the catch.

Vs Houston, he is supposed to get inside and block the safety but doesn’t get there in time and the play ends up a tackle for loss.

Overall, Gray has the athleticism and speed to play at the next level. He can be used outside or in the slot and if you get him the ball in space he can make big plays. Jet sweeps and fly passes can be used behind the line of scrimmage and he can take the top off of the defense. Areas of improvement include showing trust in his hands, general improvement in his route running and adding play strength.

Gray projects best as Z outside receiver but can play in the slot as well. The Steelers offense was lacking speed in 2020 so adding some this year is imperative. There’s a chance they could lose three of their five game day receivers from last year so they will be in the market. Watching Gray made me think of Mike Wallace and what he was able to do in the offense and they both had the same 40 time.

Games Watched: 2021 – At Louisiana Tech, At TCU, At Navy, At Houston, At Memphis