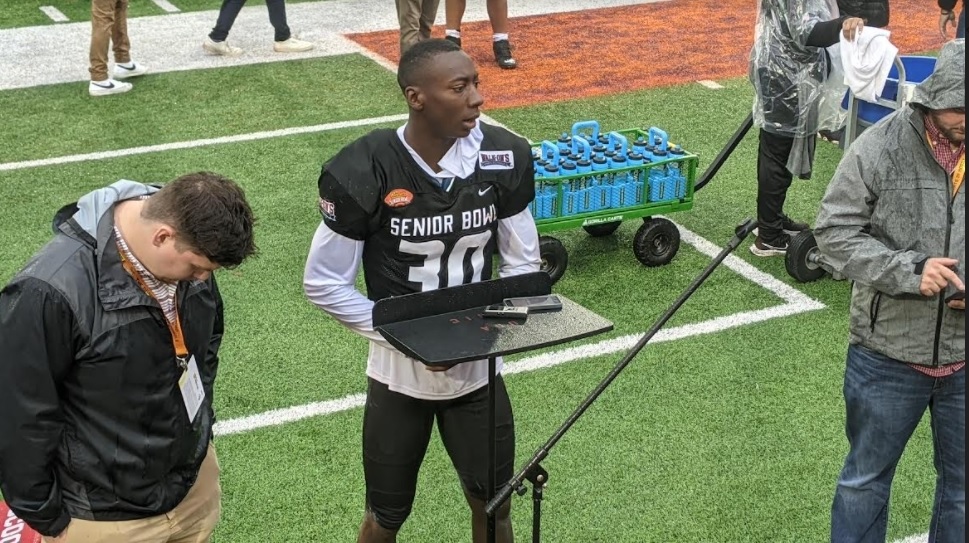 From now until the 2022 NFL Draft takes place, we hope to scout and create profiles for as many prospects as possible, examining their strengths, weaknesses, and what they can bring to an NFL franchise. These players could be potential top 10 picks, all the way down to Day 3 selections and priority undrafted free agents. Today, I’ll be profiling Joshua Williams, a Division II prospect who has garnered a lot of attention over the last few months with his length and coverage ability.

— Fluid hips and footwork allow him to remain in hip pocket of receivers
— Smooth mover in and out of his backpedal, can open his hips and stop on a dime
— Clean footwork allows him to click and close on passes in the quick game, and midpoint deep routes from slot receivers in zone coverage
— Excellent recovery speed to break up passes and disrupt timing on routes
— Always in phase as the ball is arriving or in the air, plays through the hands of receiver when he can’t locate the football
— Plus ball skills, created five interceptions as a three year starter and finished with 22 passes defensed at college level

— Aggressiveness in coverage causes him to get grabby when he is in trail position, and is susceptible to double moves with how ballhawking he is.
— Risk-taker who gives up big plays because he goes for the ball rather than securing the tackle first.
— Struggles as a tackler in the open field, not due to effort but just does not wrap up, especially in the run game.
— Needs to improve locating the football in man coverage, had a tough time staying attached to his man when he attempted to look back for the ball.
— Played at DII level, which does not compare to what he will see at the NFL level, but did hold his own at the Senior Bowl.

With the futures of Joe Haden and Ahkello Witherspoon for the Pittsburgh Steelers in question, the organization will need to infuse young talent in the fold for an inconsistent group during the 2021 season. Although he may not be ready to handle full responsibilities in an NFL defensive back room from day one, Fayetteville State Joshua Williams is a player that could very well be on the Steelers radar in the draft process.

The first thing you notice when you pop on Williams’ film is his length and closing speed. On this play below, in a Cover 3 alignment, Williams does a nice job being slow to turn and run with the receiver, getting in good position. turns back and snatches the ball out of the air for an interception. He’s a natural athlete with plays like this littered all over his film.

Although he played nickel as a freshman and outside corner over his next two seasons, Williams plays almost like a free safety in off match cover zone situations. Fayetteville State is playing a version of cover four match zone, where they are responsible for a quarter of the field, and if your man stays vertical, you continue to run with him. Williams understands here that the quarterback isn’t throwing the ball over his head, baits the throw, makes a great close and returns it for six points. He has excellent instincts in deeper zone coverages and is a ballhawk.

While he excels in zone coverage, Williams does present upside as a man cover corner as well. At the bottom of the screen, Williams showcases patient footwork and transitions quickly into phase, and while he doesn’t look back for the ball, pushes his man towards the sideline and plays through the receiver’s hands. As mentioned in his weaknesses, Williams never locates the football and a better throw and better receiver would stack him. Nonetheless, Williams still makes a play on the ball despite never getting his eyes truly on the pass.

One of the few times Williams gave up a touchdown this year, this play is more about him not locating the football in the air and mistiming his jump. This is a desperation heave on fourth down near the goal line, and initially, Williams does a nice job staying square and forcing his man near the sideline. But as the ball arrives, Williams loses sight of his man, tries to locate the football and loses track of both on the way to a touchdown. This doesn’t show up a lot on his tape but still concerning that there are plays where he doesn’t locate the football.

Williams shows excellent recovery speed even when he is beat on some reps, like the one below. He gives up inside position at the top of the screen on the slant pattern but quickly flips hips, and gets his hand in to knock the ball away. That type of fluid movement is intriguing because of his size profile. and he finishes the rep strong even when he’s initially beat.

Final play from Williams below shows his ability to mirror and stay attached to the hip of a receiver on a double move. At the snap, Williams uses the two handed stab technique to reroute his man, forces him down inside and off track of his route, and stays glued to his hip and eliminates his man. Man coverage ability has plenty of upside.

A prospect that was a late discovery of draft Twitter, Fayetteville State defensive back Joshua Williams has been on the constant rise as a prospect. Although many will point to his competition (Division II) as a reason not to draft him, his length, footwork and ball skills makes him an intriguing high upside player who has the tools to be a legit starter in the NFL within two to three seasons. The ball production was apparent and while he needs to improve as an overall cornerback while adjusting to the speed of the NFL, he has no long speed questions after running a sub 4.5 at his size/

His ceiling is a CB2 for the Steelers, who can be an immediate contributor on special teams. He held his own down at the Senior Bowl, stymying prospects like Romeo Doubs and Khalil Shakir, while also showing the ability to cover tight ends. Williams is a low floor, high ceiling prospect who the Steelers would have to be willing to bet on his traits to yield long term results.