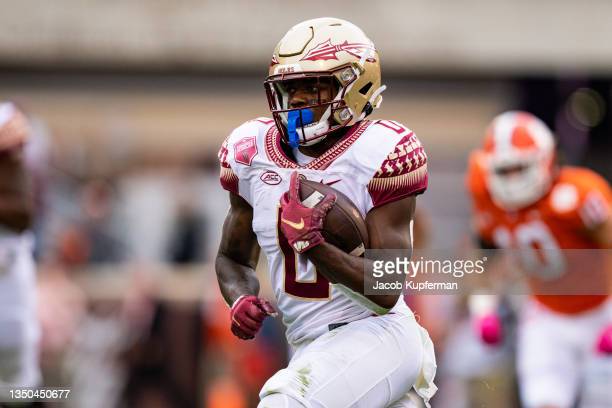 From now until the 2022 NFL Draft takes place, we hope to scout and create profiles for as many prospects as possible, examining their strengths, weaknesses, and what they can bring to an NFL franchise. These players could be potential top 10 picks, all the way down to Day 3 selections and priority undrafted free agents. Today, I’ll be profiling Jashaun Corbin, an explosive one-cut runner who could provide a chance of pace type of back for the Steelers.

— Explosive, one cut runner who quickly gets north and south
— Showcases patience, acceleration and burst once he reaches second level of defense
— Clean footwork allows him to create lanes to run through in small spaces
— An asset in the screen and short yard passing game, has 44 of 60 career catches over last two seasons
— Stoutly built lower half allows him to break arm tackles, stood up blitzing linebackers and safeties in pass pro
— Relatively low tread on his tires, has 400 total touches between rushing, receiving and returning

— Not a creative runner with the ball in his hands and does not break many tackles in the open field.
— Does not push the pile much in short yardage situations, not an ideal short yardage back.
— Patient runner but misses back side holes on outsize zone runs and fails to consistently press holes on power schemes.
— While he shows upside as a pass protector, his hands get outside of the frame and ID’s pressure late on perimeter blitzes.
— More of a zone scheme fit, struggles finding holes on dive and trap run schemes.

If the Steelers are looking for a change of pace back who can also add value out of the backfield, Jashaun Corbin should be on the shortlist. The former Texas A&M Aggie turned Florida State for his final two years of college and put it all together in 2021, accounting for over 1,000 all purpose yards as a feature back. His ability to accelerate once he hits the second level, and that’s on full display on the play below.

Corbin shows nice patience to allow the puller to seal off the edge, makes multiple defenders miss who tries to arm tackle him and shows off his long speed on this touchdown run.

While Corbin is not the most explosive back in this draft class, he does a nice job accelerating towards the edge and allowing his blockers to create an outside line for him. On these pitch out plays, Corbin has enough speed to beat linebackers and safeties towards the sideline, and although he did not run in at the combine, speed does not look like an issue on film.

This next play shows how Corbin can make defenders miss in the backfield, hit an alley and accelerate through. In this run against Clemson, Corbin does an excellent job powering through an arm tackle and popping off a 20-plus yard run. One of my concerns, though, is the lack of elusiveness and creativity he shows in the open field, because this run could have broken for even longer. Still, another flash of that acceleration that can complement a bruising runner like Najee Harris.

While Corbin didn’t see a ton of downfield targets, the rep below in particular gives us a glimpse of what he can bring to an NFL offense. On this choice route, Corbin does a nice job setting up the outside linebacker, makes a quick headfake and pops a big chunk gain in the receiving department. Although he was mainly utilized in screen passes and check downs, there’s potential for Corbin to take another step of development being utilized much more as a receiver with his skillset. He possesses natural hands as well.

On another pitch out play, Corbin shows some quick vision to hit the alley and once again show off his acceleration. Although he has popped a few runs from runs in between the tackles, it’s important to note that Corbin excels more hitting the perimeter. I think this is a good example of why Corbin needs to be in a scheme that utilizes his speed to attack the perimeter of defenses as opposed to banging him into the line of scrimmage.

In terms of pass pro, Corbin is still rough around the edges in terms of hand placement and being able to stay on his man. However, on this particular rep, Corbin does a nice job setting his aiming angle to the outside shoulder of the extra defender flowing towards the quarterback. He finishes the rep by displacing the defender and turning him towards the sideline, sealing a lane for his quarterback to throw through. It’s not perfect but it’s a foundational rep for him.

Jashaun Corbin is a late bloomer in this draft class where it took until his final season to truly emerge as a serious draft prospect during the 2021 campaign. After rotational level production in his first three years of college, Corbin saw more of a lead back role and took full advantage of it. Possessing NFL level acceleration through the hole, Corbin does an excellent job being a decisive runner, running through arm tackles and creating chunk gains. As it relates to the Steelers, Corbin would add a contrasting style of running to a backfield that already possesses a workhorse in Najee Harris.

Corbin projects as a second or third running back on the depth chart, who has the skill set to be a number one back but does not have the short yardage power or the creativity in the open field to be a top level running back. His receiving upside adds intrigue to his profile, but ultimately he is a flier pick on Day 3 of the draft who can turn a long career with his special teams background, and if he continues to progress as a pass blocker, he can become an early third down back.