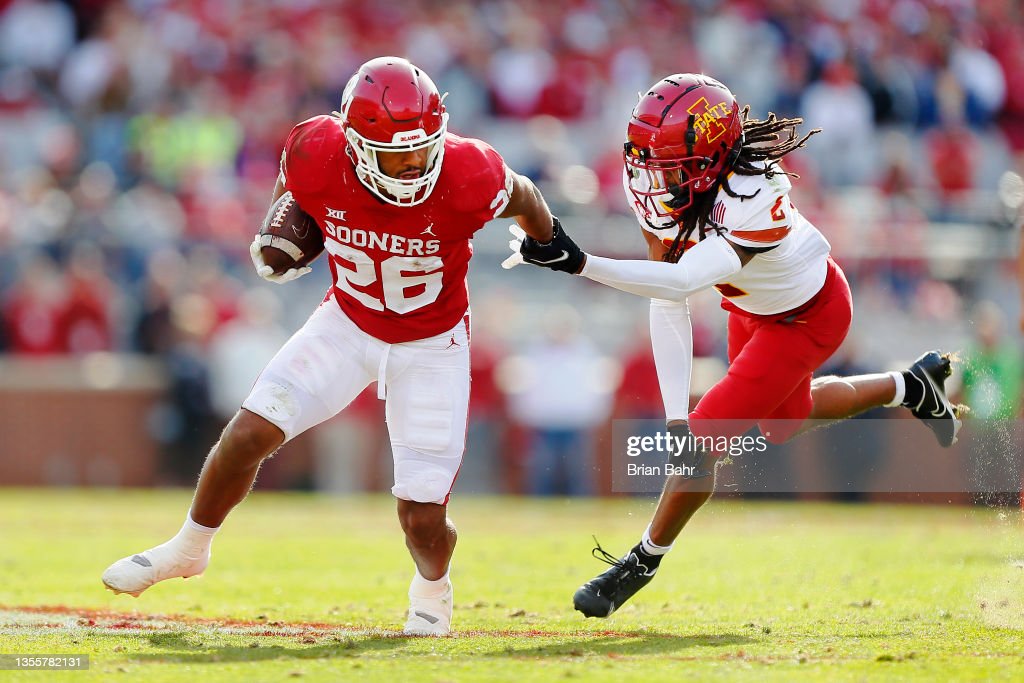 From now until the 2022 NFL Draft takes place, we hope to scout and create profiles for as many prospects as possible, examining their strengths, weaknesses, and what they can bring to an NFL franchise. These players could be potential top 10 picks, all the way down to Day 3 selections and priority undrafted free agents. Today, I’ll be profiling a running back prospect that produced exceptionally well in every season in which he played at the college level, but his athletic upside and traits could potentially limit his impact at the next level.

— Solid size with an NFL-caliber frame at the position
— Runs with a fair amount of strength and power in his game
— Can break through arm tackles and does a good job attempting to move the pile after initials contact
— Has good contact balance, being able to stay upright after absorbing blows from would-be tacklers
— Shows patience and a sense of rhythm as a runner
— Well executes zone blocking schemes, having the vision and feel to allow his blockers to create a lane for him to exploit
— Can make a quick side to the side if needed to work around a block
— Showed the ability to serve as a check down option in the passing game
— Posted three-straight seasons of 1,000+ rushing yards with the Sooners in a shared backfield
— Known for his personality and passion for the game by his peers and coaches

— Lacks elite long speed of explosiveness to rip off dynamic runs
— More of a one-speed runner that builds up speed rather than possessing instant juice
— Lacks lateral quickness to effectively evade tacklers out in space
— Doesn’t have the foot quickness or power to make wide jump cuts of shift laterally to avoid tacklers flying in at him
— Not much of a passing game option, lacking the feel for being used as a receiver outside of check downs close to the LOS
— Isn’t terribly evasive as a runner after the catch
— Has a few instances of drops or putting balls on the ground via fumbles forced
— Needs to clean up pass protection technique and show more effort in picking up blitzers

— Redshirt Junior from Mansfield, TX
— Four-star recruit by ESPN, Rivals and Scout, also named a second-team All-American by MaxPreps, won the Landry Award as the top high school player in North Texas
— Redshirted his first year at Oklahoma with a shoulder injury that was an issue in high school and didn’t see any action
—Played 12 games in 2018, garnering USA Today Freshman All-American after rushing 119 times for 1,056 yards (8.9YPC) and 12 TDs and caught 10 passes for 57 yards
— Started ten of 13 contests as a sophomore, rushing 155 times for 1,011 yards (6.5YPC) and six TD and contributing as a receiver with 10 receptions for 79 yards
— Was accused in 2019 of mental and physical abuse by a female student and was held out of football activities during the investigation by the school’s Title IX Office, but was eventually cleared to play
— Opted out of the 2020 season due to COVID-19 but decided to return to Oklahoma instead of declaring for the 2021 NFL Draft
— Played in 13 gams with seven starts in 2021 and led the Sooners with 198 carries for 1,253 yards (6.3YPC) and 13 scores and added 9 receptions for 73 yards through the air
— Alamo Bowl Offensive MVP Award (2021), All-Big 12 Honorable Mention (2018)
— Graduated in December 2020 with a degree in criminology, pursuing a master’s degree in construction science

Kennedy Brooks learned to have a passion for the game of football at a young age. Growing up in Mansfield, Texas, football was a religion of which Brooks committed himself to, resulting in him becoming one of the better RB recruits in the country as well as a second-team All-American that to his historic production on the gridiron. Brooks opted to go to Norman to roll with the Sooners after high school, and after a redshirt season, Brooks hit the ground running, posting three consecutive 1,000-yard campaigns.

When watching Brooks, you notice a patient, yet physical runner that excels in zone-based running schemes. He does a good job allowing his blocks to set up in front of him to create running lanes for him the shoot through. Here is one example against Oregon on an outside zone handoff where Brooks works toward the sideline, sees the hole open in the middle, and bursts forward after a slight cut inside to run to the end zone for the score.

Brooks has enough lateral quickness as a one cut runner to put his foot in the ground to make a cut up the field to get into open grass which perfectly suits outside zone run concepts. Here is another rep against the Ducks where Brooks take the handoff and makes a cut inside to evade the tackler, getting into the second level of the defense and makes it to the pylon before the defender can catch him in pursuit.

Brooks boasts a thick, stocky frame for the RB position, being built low to the ground with a good center of gravity. Thus, he does a great job absorbing contact and staying upright, running through arm tackles, and picking up additional yards after contact. Here are a couple of examples of Brooks displaying contact balance as a runner, churning out additional, tough earned yards on the ground.

When he gets a runway, Brooks can accelerate into the second level of the defense, picking up speed as he progresses down the field. Here against the Longhorns, we see Brooks evade a tackle in the backfield and get to the corner where he manages to shoot through the gap and run past both defenders closing in on him, pulling away to the end zone for the score.

Here is another example of Brooks bouncing off a tackle attempt and accelerating into the open field. However, it’s on this play we see the lack of a second gear from Brooks as he stalls out on his acceleration, having the defender catch him from behind and finish the play with the strip fumble and the defense ends up recovering. Thus, Brooks should be seen as a capable runner, but lacks that top-tier home run speed or elite burst to pull away from defenders in pursuit of him

Brooks hasn’t had a lot of passing game production during his time in Oklahoma and hasn’t shown the adequate skill set to be deployed as a receiver split out in the slot or on the perimeter. Still, he has shown to be a viable check down option in the passing game like we see on this play against Oregon but should look to keep developing this aspect of his game to be used more out of the backfield down the seam or out to the sideline against linebackers in man coverage.

While Brooks has decent lateral movement skills, he lacks that suddenness to get himself out of trouble in space when defenders are closing in on him. He doesn’t have that ability to make wide jump cuts laterally nor the twitchy footwork to evade defenders that have him squared up in their sights. Here is an example of Brooks failing to shake one defender in space with the end zone in sight, getting tripped up rather than explosively cutting to his right to evade the tackler and score the touchdown.

Overall, Kennedy Brooks is a high floor, yet low ceiling runner that displays the qualities of burst, patience, vision, and physicality to make him an effective runner at the next level. His lack of elite traits when it comes to long speed or elusiveness ca his upside and the need for refinement both as a pass catcher and pass protector may pigeonhole him as a two-down back to begin his career. Still, his play style would suit a zone blocking system with a team looking for another capable runner who can spell their current starter or handle the reigns in spot starter duties and represent himself well in that role.

When watching Brooks, Atlanta Falcons RB Mike Davis came to mind as a viable pro comparison. Davis shares a very similar stocky frame to Brooks and is a similar athlete, having enough quickness and burst but isn’t considered elite in either category. Both runners play with a physical running style, having the contact balance and strength to run through wimpy tackles and get the tough yardage on the ground. While Davis has shown to be a capable pass catching back during his time in the league, he wouldn’t be confused for being a stud in this facet of the game either much like Brooks at this juncture.

Davis got drafted in the fourth round when he came out of college, and while I could see Brooks going in a similar area, I believe that other backs possessing more tantalizing traits may end up pushing him down the board. This isn’t to say that Brooks is a bad player by any means, but with the topic of RB fungibility out there and given Brooks’ skill set, he should likely be viewed as a guy that may be able to start for you down the road, but not necessarily a guy you want as a feature runner.