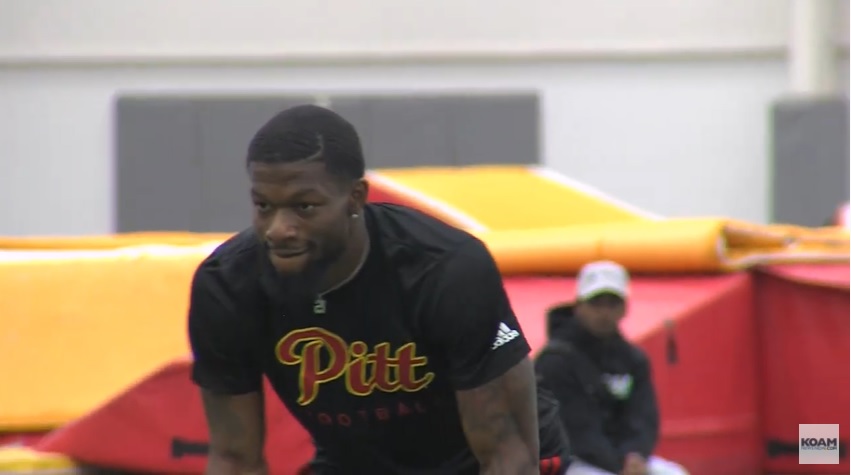 From now until the 2022 NFL Draft takes place, we hope to scout and create profiles for as many prospects as possible, examining their strengths, weaknesses, and what they can bring to an NFL franchise. These players could be potential top 10 picks, all the way down to Day 3 selections and priority undrafted free agents. Today, I’ll be profiling Pittsburg State CB Dallis Flowers.

*testing numbers will be available after Pittsburg State’s Pro Day, which is scheduled for March 21st*

— Elite ball skills, has a great understanding of how to use his length to lean, locate, and high point the football downfield
— Works hard to stay square in press coverage, forcing receivers to choose between taking wide releases or fighting through his lengthy frame, almost always disrupts route timing in press coverage
— More than willing as a tackler, has proven to be solid both breaking downhill in zone coverage as well as inserting into the box in crack/replace situations
— More than held his own in the first three East-West Shrine Bowl practices before going down with a calf injury, proving his ability to excel against NFL caliber receivers
— Elite NFL cornerback frame, coming in just under 6’1” with a wingspan of more than 6’6”
— Solidly filled out frame, sitting at 195, allows his strength to show both in coverage and as a tackler, eliminates strength concerns heading to the NFL level
— Showed the ability to bully receivers inside the red zone with physicality at the line of scrimmage and great ball skills in the red zone at the 2022 Shrine Bowl
— Length and speed allow him to play well from a trailing position when beaten off the line, does well to get back into faze and play through the receivers hands for impressive PBUs
— Was not targeted often in his lone season at Pittsburg State, making the most of his opportunities with 3 INTs and 6 PBUs
— Showed elite ability to hit seams hard and make cuts at full speed as a kick returner, a role he could excel at immediately at the next level
— Elite top end speed once he reaches full stride to go along with great hips for his size2

— Scouts will likely be alarmed by lack of consistent competition against NFL caliber talent
— Extremely physical player in coverage, although he has a tendency to get too physical downfield, drew some flags at the Shrine Bowl
— Although he is great playing from a trailing position, he developed a tendency to rely on it too frequently, he is at his best when able to stay square and dominate receivers from the upfield shoulder
— Was taken off the field occasionally as part of a cornerback rotation

— 2021: 21 tackles 1.5 TFLs 4 INTs 10 PDs 17/573 yards on 17 kickoff returns(33.7 YPA), 2 return touchdowns(98 and 95 yards), both of which were taken on the opening kickoff
— First Team All MIAA as a cornerback/Second Team All MIAA as a return specialist in his lone season at Pittsburg State
— Played at NAIA Grand View University before transferring to Division II Pittsburg State for his final year of eligibility
— Two time NAIA All-American selection both at cornerback and kick returner
— 2019 at Grand View: 33 tackles 5 INTs, 738 all purpose yards(38.1 yards per KR, 11.1 yards per PR)
— Broke former Arizona Cardinal John Brown’s kick return average record in his lone season at Pittsburg State
— Born June 4, 1997, will be 25 by the time his rookie season begins
— Also attended Tiffin University and Robert Morris University before transferring to Grand View

Entering the 2022 NFL Draft, the Steelers are both searching for depth at the cornerback position, as well as a potential need to fill a void at the kick and punt return slots, though Gunner Olszewski may have solved that problem. Enter Dallis Flowers, a prospect coming out of Division II Pittsburg State who turned heads at the East-West Shrine Bowl practices with his ability to suffocate receivers off the line with his length and physicality in press coverage.

While his road to the NFL draft was not traditional, starting at Robert Morris University before transferring to Tiffin University, Grand View University, and finishing his career this past season at Pittsburg State. After being named an All-American in both of his two seasons at NAIA Grand View University, both as a cornerback and kick returner, Flowers completed his final year of eligibility at Pittsburg State, proving his ability to succeed amongst NFL talent in one of the most competitive conferences in all of Division II.

Flowers’ prototype frame for the position, standing at 6040, 195 pounds with a 6’6” wingspan, helps allow him to frustrate receivers at the line of scrimmage and challenge them downfield at the catch point. On the rep below, from a home matchup against the University of Central Oklahoma, Flowers aligns in press coverage on the boundary, using an inch technique to force the receiver before engaging an off hand jam and squeezing the receiver into the sideline.

Even when beaten off the line, Flowers’ length and patience forces receivers off their path, allowing him to quickly flip his hips, get back in location, and use his length to play the ball from a trailing position.

Later in the game against Central Oklahoma, Flowers, once again aligned in press coverage in the boundary, the receiver is able to gain separation with a quick speed release to the inside. Regardless, Flowers is able to get back into phase quickly, opening his hips and covering ground with an explosive crossover step, locating the near hip, and undercutting the glance post for a diving pass breakup.

One of the best aspects of Flowers’ game is his versatility in press coverage, where he is proficient in many different techniques at the line. On the rep below, also from later in the contest against Central Oklahoma, Flowers once again aligns in press coverage, this time utilizing a mirror press to patiently give ground, forcing the receiver to take a wide release without using hands.

Once the receiver declares on the fade route downfield, Flowers closes to the near hip, stays on top of the route, and plays through the hands for his third pass breakup of the game.

One of my favorite aspects of Flowers’ game, he understands how to use his size as a tackler, finishing through ball carriers at the point of contact and using his large frame to deliver some violent sticks. Below, serving as a flat defender in the red zone against Missouri Western, Flowers does well to mid point a levels concept, gaining depth to take away the seven cut before reading the quarterback and driving on a whip route from the #1 receiver.

Flowers triggers immediately, flying downhill and laying a physical stick on the receiver, helping keep him out of the end zone and force a third down attempt. Similarly, Flowers functioned extremely well in crack/replace situations in his lone season at Pittsburg State, inserting off the edge to stick ball carriers before they could turn upfield.

Beyond his obvious talent at the cornerback position, Flowers has proven to be an elite kick returner at every stop of collegiate career, first breaking former Cardinal John Brown’s Grand View kick return record, posting an average of 38.1 per return before returning two back for scores in his lone season at Pittsburg State.

Below, on the opening kickoff against Missouri Western, Flowers sets the tone, bursting through a seam and showing great body control to break multiple tackles in tight space before stiff arming a tackler and displaying angle busting speed to break away for the touchdown. Regardless of his ability to contribute on defense as a rookie, I strongly believe Flowers could enter the league and make an immediate impact as a kick returner.

Once again, in a road matchup against Fort Hays State to close the season, Flowers returns the opening kickoff for a score, his second of the season, showing off his ability to make open field cuts at full speed. Upon fielding the ball, Flowers gets into his stride working downfield before tight-roping through a crowd untouched and making two defenders miss before galloping untouched to the end zone. Flowers’ long strides and elite contact balance should help make him a weapon at the kick return spot in his transition to the NFL level.

Against the University of Central Oklahoma, Flowers aligns in press coverage on the boundary and gets shaken off the line by a smooth head fake inside speed release by the receiver. While Flowers is able to get back into phase, playing from his proper outside leverage, but the play ultimately goes for a touchdown as his post safety cedes inside leverage and is not in position to provide help. Had Flowers used his signature inch technique to stay on top of the receiver from outside leverage, he likely would have been able to key the quarterback and undercut the route as it broke toward his inside safety help.

While I undoubtedly expect the Steelers to target a cornerback early based on the current status of the unit, Flowers elite kick return ability and high upside traits make him an ideal late round target for the Steelers. Flowers could immediately assume duties as the team’s primary kick returner while serving as quality depth at the cornerback spot (Ed Note: This article was written prior to the Olszewski signing). At 24 years old, he is already more capable as a boundary cornerback than either James Pierre or Justin Layne, and could likely fill their roles on special teams both serving as a gunner on the punt unit and covering kicks on special teams with his speed and physicality.

While he certainly needs to refine his technique in both press and off coverage, Flowers has potential to be an effective man coverage defender at the NFL level, and has solid zone processing ability as both a deep ⅓ defender in Cover 3 and a flat defender in Cover 2, where his physicality stands out.  As a kick returner, Flowers’ size, long strides, and elite body control give me shades of Cordarelle Patterson, who similarly navigated the small school route throughout his collegiate career before finishing his career at Tennessee. At the cornerback position, Flowers reminds me a bit of former Steelers cornerback Bryant McFadden in his ability to use his length to squeeze receivers downfield, as well as his ability to come downhill effectively as a tackler.

Overall, Flowers is an extremely high upside prospect at the cornerback position whose ability to contribute immediately as a kick returner should help him here his name called somewhere on Day 3. With as deep as this year’s cornerback class is, Flowers could present the Steelers with a perfect opportunity to double dip at the position later in the draft while also securing a potential difference maker at the kick returner spot. Wherever Flowers ends up, his long road to the NFL makes him an easy guy to root for in his transition to the next level. Regardless, I wouldn’t be surprised in the least if he develops into a quality starter in the league a couple years down the road, wherever he ultimately lands.